Kapil welcomes all and speaks that people think that couples (Jodi’s) are made by God then asks how then we see couples at Bandstand in Mumbai hiding behind big stones bringing laughter and asks are they discussing budget there ? He speaks that these couples are made in college, school, and then they are seen behind stones away from public eye. He suggests that police comes there and hits the man beneath his ears and he will just utter that he is a mobile phone repair technician.

Daadi comes on stage and the audience chants her name in unison. She wants the audience to chant Bittu.. Bittu instead since she wants to see Bittu giving her a great grandchild. Daadi asks Bittu whether he will listen to her heed. Daadi speaks about his drinking which she has earlier stated – that she drinks because of her helplessness and not for happiness. She thinks that Bittu doesn’t understand her pain and he responds that how can he help her since she gets beaten up in the neighborhood and gets pain in her body. She wishes to have a favorite and ideal grandson who always listen to her, takes her care, does things before she actually informs him to do, doesn’t stop her from tasting anything and she waits for him. [Kabhi Khushi Kabhi Gham (K3G) tune plays and Karan Johar is seen to come on stage]. She welcomes him at the door, and Karan comes there giving an entry like the one SRK did in the movie K3G (getting out from the helicopter and coming to his home). Karan asks how come she knew that he is coming. Daadi replies of opening the door just to get some fresh air bringing laughter. 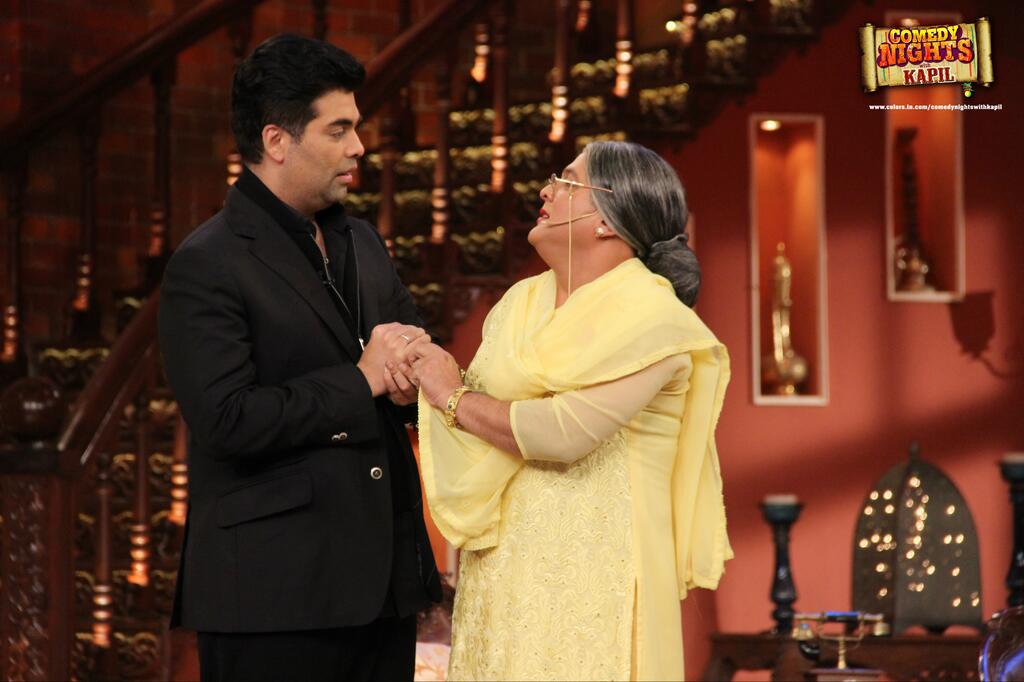 Karan tries to touch her feet and then wants her to help him citing that he became old. Karan greets all and then she asks Karan whether until now no girl has said to him – Tum Nahi Samjho Ge Karan, Kuch Kuch Hota Hain [You will not understand, I feel something…] while holding him tightly. She asks him to give a reply. Karan responds that actress Kajol enacted the same scene with him during the film’s shoot but no girl has said to him those words and also holds Daadi tightly. Bittu speaks that Karan doesn’t need to bother about vegetables at home, or taking Alia in his back to back films. Karan speaks that he has made his mother happy by not having a wife so she doesn’t need to share her jewellery or son and is appropriate. Karan calls himself Nikamma and after hearing it, Daadi thinks that Karan is also like Bittu and leaves from there. Karan shares an anecdote with Kapil about the time when he has put up a big set for his movie and his father late Yash Johar was standing in front of the set outside and one of his friend came to him and asks why are you standing outside ? Yash ji responds that his son has set-up a big set inside so he came on the roads bringing laughter.

Sooner, Pankhudi comes there and calls Bittu’s name. She first asks for Bittu and then makes a taunt that she came to meet Karan Johar. She greets him by touching his feet and Bittu informs that he is small in his age compare to her and she replies that indeed yes, but he is a much bigger director. Pankhudi then welcomes Varun Dhawan and Alia Bhatt and calls them the original Sharma’s – Humpty Sharma and his Dulhaniya.

Varun Dhawan and Alia Bhatt were sitting on the audience and starts to come on the stage while singing the Badshah Rap from the song Saturday Saturday [Hanji fir ek baar dekho aaya shanivaar, Party karne ke liye baby ji ho gayi taiyyar, Sarojni ke kapde pehen ke jaati madam disco,VIP me complimentary shots bhi de do isko, Isko gaadi chahiye lambi,Usme music chahiye LOUD….] and Kapil speaks a line – Yo Yo Alia Bhatt. He welcomes them and then Mrs. Sharma (Manju) comes on stage. Alia wants to make a point at that moment, and calls the word declaration as decoration, declaration, decclaration and looks at Kapil. She speaks to Manju that her husband sends SMS to her for 600 times, missed call for 999 times, and writes letter for 3 times. She then shows how Kapil came to her home and pleaded her to come on his show by spreading his hands and body in stiff position and his words were – Baby, Please come to my show.. She speaks of coming to the show after doing a film with Karan in a funny way. Manju speaks that the baby (Alia) should dial 1.0.0 (100) after doing such thing. Bittu speaks that her father attends 100 call and delivers Samosas. Bittu asks how his wife can speak in such a manner with Alia, and Manju in turn wants to make Varun as her husband as he also comes often on their show. 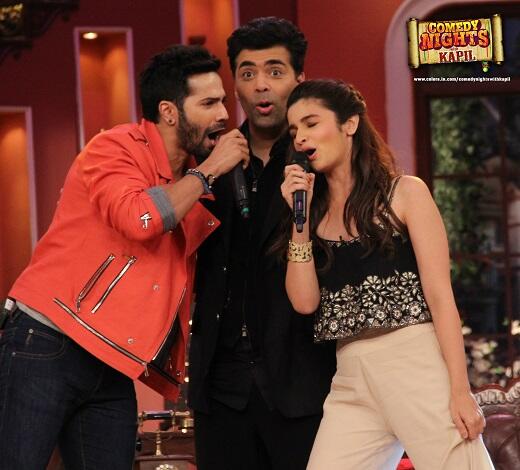 Bittu makes another taunt at his wife Manju and suggests why Varun will come close to her, and thinks that Varun has touchscreen phone so why would he like a landline which was a comparison between Alia and Manju. Furthermore, he suggests why would Varun prefer Churan Ki Goli when he has Ras Malaiye in his plate bringing laughter. As always, Manju leaves from there after getting a rude reply from Bittu. Kapil speaks that we know Karan is a judge on reality shows and now Alia has also started to give numbers, and she has given 10 points to Varun. He asks Alia on what matter she gave Varun that score. Alia speaks that as Comedy Nights is a family show (Parivaarik) and karan calls her liar for speaking about the family show and smiles. Kapil asks her what is that thing which is not meant for family show. Varun asks how come a family is made. Karan opens up and speaks that Alia was referring to Varun’s kissing and regards that as she is a sister of Emraan Hashmi thus she is also a serial kisser in a humorous way. Alia smiles and speaks that she is a good girl who even goes to temples. Karan speaks that their family song is – Kisse Pyaar Karu… Kapil then introduces TV actor Siddharth Shukla who is making his debut with Karan’s movie (Humpty Sharma Ki Dulhania). 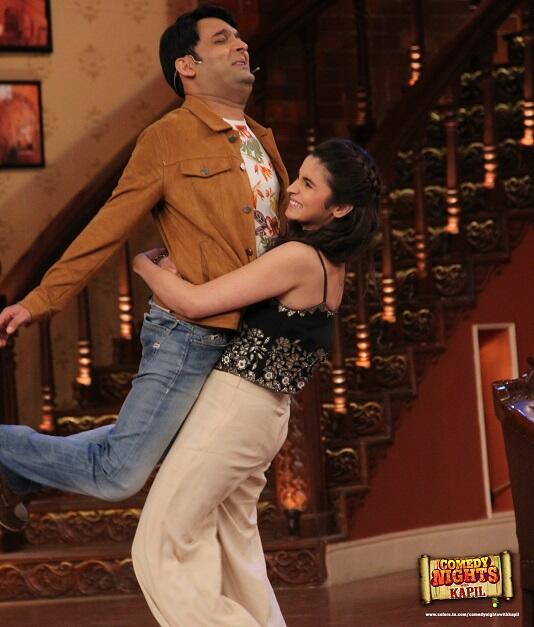 Bua comes on stage and interacts with Karan and Alia. Karan speaks of Kajol and SRK doing many roles in his films, and wants Bua to enact one of the situation. She thinks herself as Kajol but is corrected by Karan who wants her to play the role of SRK and Alia will enact like Kajol. Bua is amused and then Karan explains the scene is a romantic one and the couple will be teased by two loafers. Bua at first wants to become SRK and makes different sounds to mimic SRK but does in a very bad way and also gives SRK’s signature pose. Varun and Siddharth get a laugh after seeing her mimicing SRK. Varun and Siddharth acting as loafers come close to Alia (Kajol) and Bua (SRK) and starts to tease Kajol  and gets hold of her. Bua then gets hold of the loafers and makes sound like a horse but thinks herself as mimicing SRK. Bua then leaves after her act.

During their interaction with Kapil, Alia speaks of giving massage to Varun every day. Varun puts his hand on her mouth and wants her to be quiet. He then wants to clarify the audience about Alia’s talk though she wants to clarify it through her face. He speaks that on one hand Alia speaks such things in public and then later asks him why people write about her in different light ? The audience and everyone gets a laughter on that Varun’s point. At some point later, Varun goes down on his knees and makes a proposal for Alia. 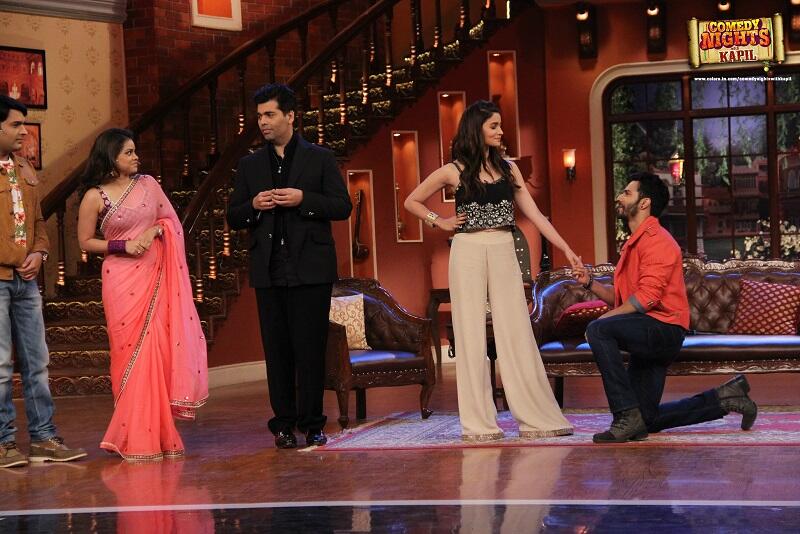 Pankhudi comes again and Daadi is seen on stage as well. She confronts Daadi and speaks that she was drying the Upra (Gobar balls – excreta of bufallo) on the terrace and thought to splash some lemon and tomato and then fry it and eat later. And Daadi there have kept her clothes for drying because of which her Upra had become wet and she has to cancel her plan to eat it. She thinks that her lunch plan is completely devastated invoking a laughter. Daadi asks Pankhudi whether she wants to kill her, and she replies yes. Both begin to fight and Varun mediates and suggests instead of fighting they can dance with him and Siddharth on his movie’s Saturday Saturday song. Daadi and Pankhudi dances with them with much energy and Karan is also seen to dance and enjoy himself. Kapil signs off by saying Keep loving and watching his show every Sat and Sun. 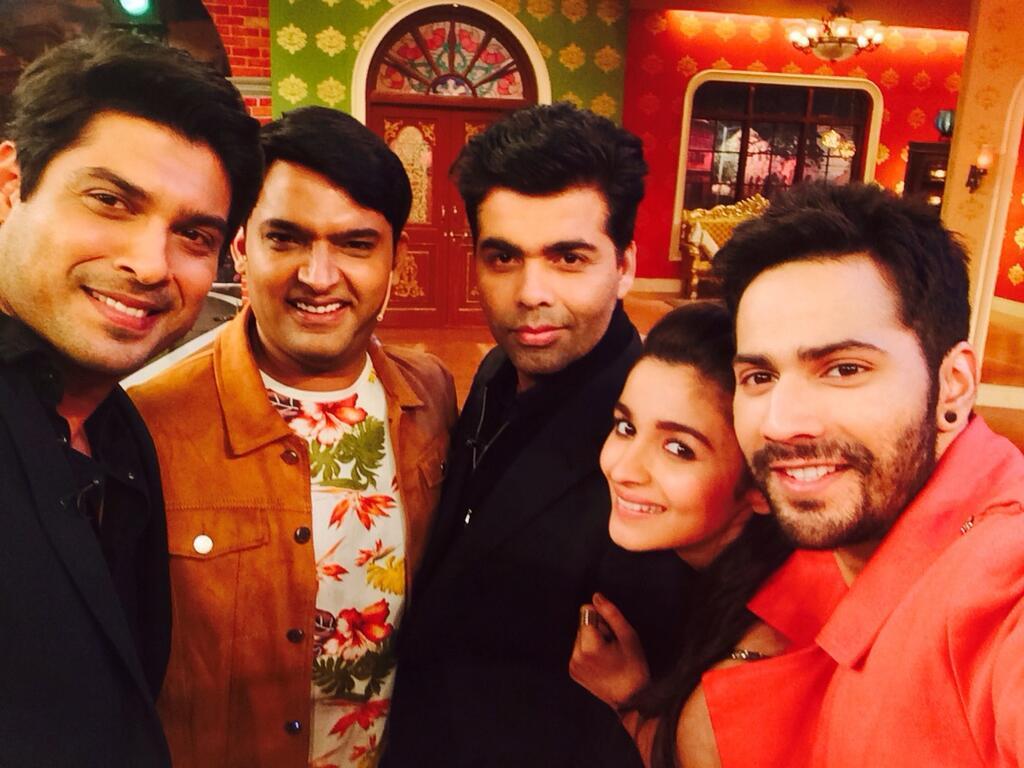 Short Promo 1: Alia and Varun in a humorous discussion about Alia’s talking in public
[youtube id=http://youtu.be/uq2NvW9nHb8]