Kapil makes a grand entry on stage by coming on a luna bike with popular and loved Cricketer and Star Virat Kohli. In a lighter tone he informs the audience of not able to get Virat on CNWK since he was not taking his phone call and admits the fans request for Virat on show since many months. Sooner, Daadi comes on stage on a bang and gets a chant from audience Daadi Daadi. She wants a match pass and Virat asks her which stand ? Daadi replies that she wants a pass to stay in front of the umpire on the cricket pitch. 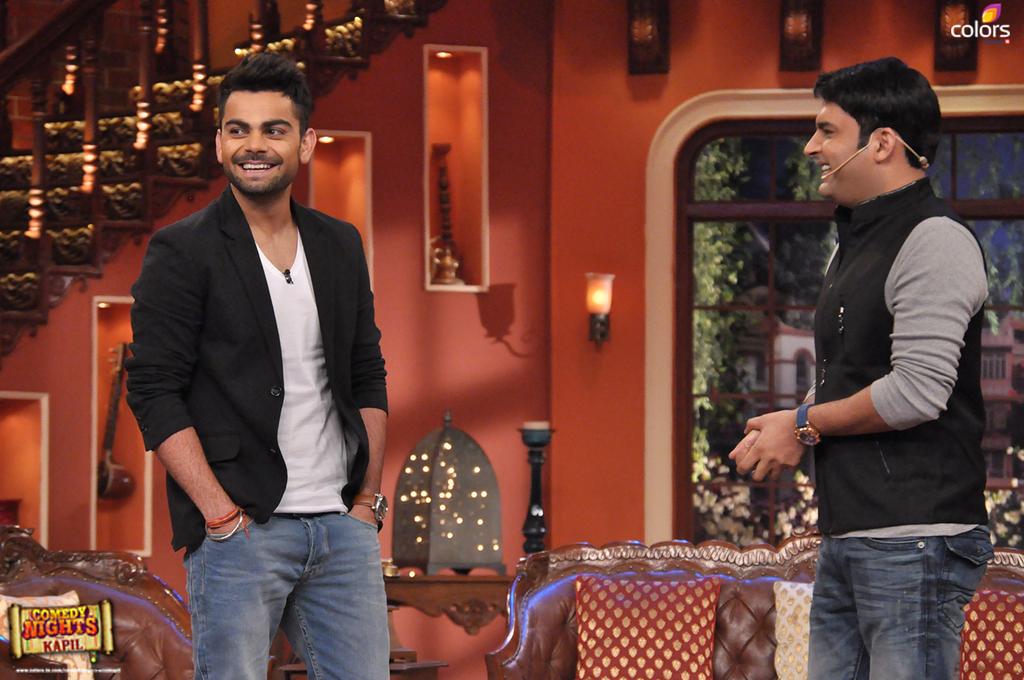 Daadi feels happy to know that Virat has went to Spain for watching the football world cup final. Bittu informs Daadi that the world cup was in Brazil and not Spain. She then suggests that for others the world cup was in Brazil but for Virat the final was in Spain [Referring to Virat’s visiting Anushka in Spain, she is shooting in Spain for her upcoming movie]. Virat becomes shy after hearing Daadi’s words and wants to hid behind her. Daadi speaks that she is also a party animal like her and thus dance is much needed. They dance on the Gandi Baat song and uses Daadi’s signature dance steps as well and at the end of the dance Daadi fall down as Virat didn’t hold her properly. Daadi leaves from there. At some point in the show, Virat enacts the same Babaji Ka Thullu like Kapil. 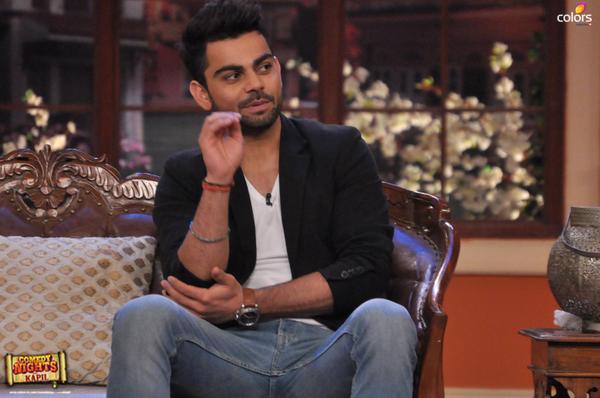 Sooner then, Mrs. Sharma (Manju) comes there and wishes Virat with a Namaste. He speaks on feeling happy after seeing her. Manju makes a taunt that Bittu doesn’t know the spelling of Etiquette. She asks Virat on his honeymoon destination in future. Bittu speaks of Manju’s honeymoon destination which is a Zoo in Nasik. She then makes a taunt and informs Bittu that he took her to a mental asylum in Agra. Bittu makes his taunt more specific and suggests that at the zoo in Nasik, Manju was feeling elated after seeing a Chimpanzee and he was feeling happy after seeing her in that mood bringing laughter on Virat’s and audience face. Manju leaves from there.

Kapil opens the floor to the audience and the girl asks Virat whether he looks to eat Pakodas or prefer gym on a rainy day. Kapil asks her name and she informs Anushka and then Kapil calls himself Sharma. He thinks that the girl asked a boring question and asks – what do you mean babe ? to her. Later, Kapil shows photos of Virat on the big screen there capturing recent events related to him. One of them is about the marriage proposal from England’s women’s team cricketer – Danielle Wyatt who had sent her proposal to marry Virat with her tweet on twitter. Virat informs that he learnt about the proposal when he was playing T20 World cup in Bangladesh and he didn’t got  a chance to ponder over it since his mother has already gave an interview citing that her son haven’t reached yet the age of marriage.

Virat and Pinky Bua are engaged in a fun activity where Virat has to sell Pinky’s lipstick. First, Bua shows him how to sell her lipstick and then comes Virat’s turn. He enacts in the same way and asks people to buy Pinky’s lipstick and then revolves the it close to his mouth and speaks that he is very of fond of any of the girls who uses pinky’s lipstick, and shows his emotions by moving his chest in a funny manner bringing laughter. Chaddha comes on stage while calling cheating is taking place. Bua and Daadi is also on stage and when Bua informs that the cheating thing is of the past and stale. He informs her that is fine and he will then speak about their family’s meanness. 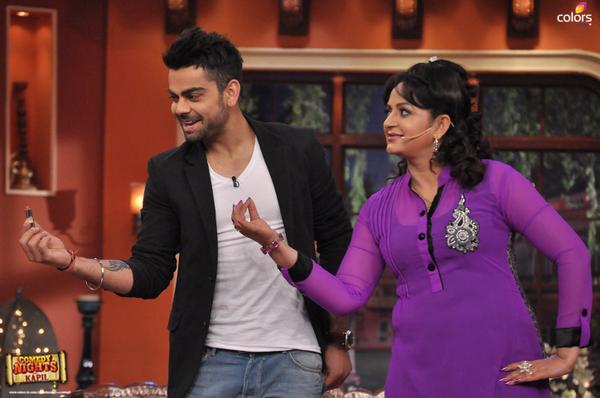 Chaddha speaks how bittu’s family takes the roti from the home of rats as they know of the guarantee to get food there on time invoking a laughter. Bittu speaks of not engaging in a talk with him because of the seniority but anyway can break his mouth with a puch. Pankhudi speaks that they have done cheating and bittu in turn wants pankhudi to clean her mouth with acid to correct the voice. Pankhudi and Daadi begins to fight but is mediated by Virat to not fight. He suggests them to play a game instead as he is a sportsperson and will be the judge. He then puts a handkerchief on the floor there and speaks that the winner will be the one who takes it first. Both Pankhudi and Daadi begins their quest to take it first and soon both of them gets hold of the handkerchief and it turns out that there were 2 of them. After getting one each, they were still not satisfied and begins to have a cat fight as they do always and is so aggresive and humorous that they again fall on Virat’s lap. With Virat on Comedy nights, a laughter riot is guaranteed and not to forget many instances where Virat’s chemistry with Anushka will be highlighted as well. Stay tuned to CNWK tonight @ 10 PM on Colors. 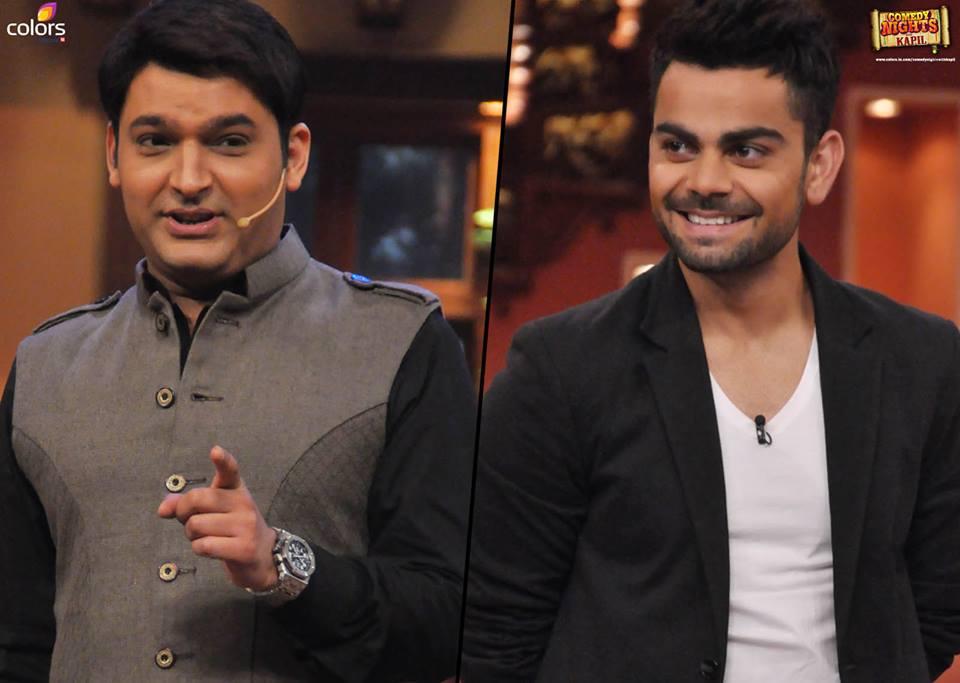 * On 4th April 2014 after Virat hit a winning knock of 74 runs against South Africa to take India to the final of T20 World Cup in Bangladesh, English and Notts Cricketer Danielle Wyatt wrote a tweet asking Virat to marry her.

“@bhaviknz: @Danni_Wyatt he is booked to bollywood actress @AnushkaSharma” nah he ain't