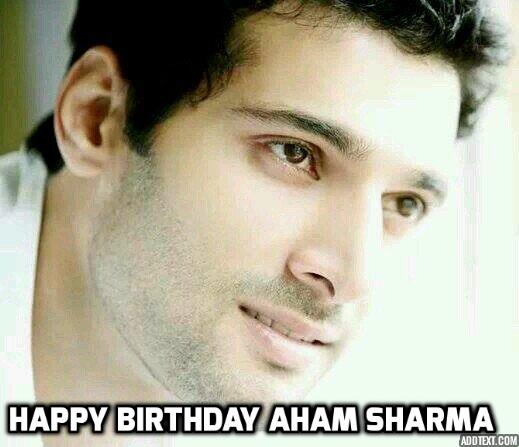 First, Tellyreviews want to wish Aham a very Happy Birthday and wish him the best very best the year ahead and in life. Aham – the handsome hunk is a young and elegant actor and was born on 22nd July, 1989. He made his debut with the show Chand Ke Paar Chalo and then went to play the role of Angad in Aasman Se Aage. Currently, he is playing the role of Karna in Star Plus’s Epic TV show – Mahabharat and also won an special award at Star Parivaar Awards for the role of Karna.

Coming to Aham’s role of Karna, it has different shades as far as acting goes, and we learn lot of things from the role – epitome of friendship, sacrificial, man of his word, true and courageous warrior and the actor – effortless dialogue delivery, great screen presence, coordination between other actors excellent. Some of the iconic scenes from the show takes place on few occasions, we will name a few here.

(1) When Karna learns that he is not the son of Adhirath and actually the son of Kunti, he felt so pain as the world has crumbled for him. Aham really projected those scenes well.

(2) Karna giving away his Kavach and Kundal as charity to a poor Brahmin which turns out to be Indradev and because of his promise to give up his immortality with those special weapons, he was granted a special boon from Indradev which he eventually used to Kill Bheem’s son in Mahabharat War.

(3) Desire of Karna to defeat Arjun in the archery fight has also been well projected with Aham. In short, Aham has made his mark as Karna in Mahabharat and has done full justice.

Aham described his character of Karna as the magnificent one. Aham has a large fan following due to his acting and also because of his humble nature. Moreover, his handsome hunk looks adds cherry on the top with his fan’s admiration. He shares excellent rapport with fans on Twitter and often returns gratitude for their appreciation and love. Aham celebrated his birthday on the set with his co-actors from Mahabharat portraying the roles of Duryodhan, Dushyasan, Shakuni, and others. TellyReviews and Aham fans want to conclude our heartiest greetings to Aham and wish him the very best for his future !

Thank u so much fr ur lovely wishes!U made me feel so special nd blessed, made this birthday of mine memorable one!! Love u 🙂 God bless!!

Additional Info : TellyReviews selection of Aham’s iconic episodes on Mahabharat
* Karna informing his mother Kunti that he will be on the side of Duryodhan and will fight his own brothers. Episode 197: May 27th, 2014
[youtube id-=http://youtu.be/1Ugk3qOpUdQ]

* Article post when Karna donates his Kavach and Kundal to Indradev as promised.
https://tellyreviews.com/2014/06/03/karna-is-a-man-of-his-words-shakuni-reveals-his-true-intentions-causing-the-mahabharat-war/