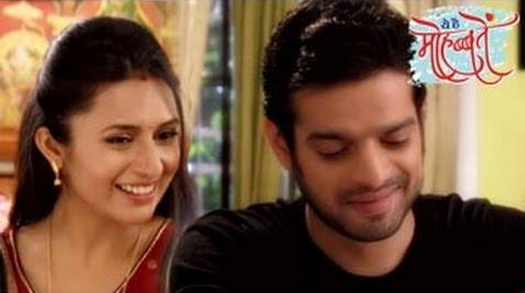 Raman’s cool one liners will be back in the show, as he is no more a Devdas and out of the Adi chapter. Everything fell in right place, and now Raman has planned a picnic for him and Ishita. But she thinks it’s a family outing and books two SUVs for both the families. Ruhi is glad about the picnic, and says in her innocence that Papa always gives what she asks for and if Ishita needs a baby, she can ask Raman for it. LOL!! Ishita and Raman look at each other feeling awkward. Raman asks Mihir to book a room in a good resort and gives him reasons for taking Ishita on a picnic. Mihir teases him asking him to chill as she is his wife and its plan to make her happy.

While everyone leave together, Raman takes Ishita with him. They have a sweet long drive and Ishita is very happy to have her normal Ravan Kumar back. Raman is at his taunting best and she too does her regular lectures and a great Nok Jhok starts on the way. Raman loses track and goes on the wrong route, while Ishita says the right one. But the male ego does not make him listen to her and he proceeds in wrong way. They get lost on the lonely highway and suddenly he loses control and the car goes out of the way and hits. Raman and Ishita’s heads touch the front. While they are not injured, Raman worries for her.

She comes out of the car and asks where am I and who are you. He says I m your husband. She says what. He tells her that we have a daughter too. She looks at him shocked and says she does not know him. She asks about her Amma and he says we are going to her, sit back and we will leave. She refuses to go with a stranger. He panics and thinks what to do, seeing her not remember their marriage. He tries to remind her of their marriage and she bursts out laughing seeing his face fully tensed. Raman then understands she was joking. She tells him its so funny to make him tensed and she is fine and simply joking. Raman scolds her and the duo gets back on the route to reach the resort. The scene is hilarious as Ravan Kumar had cold feet for a moment. Keep reading.