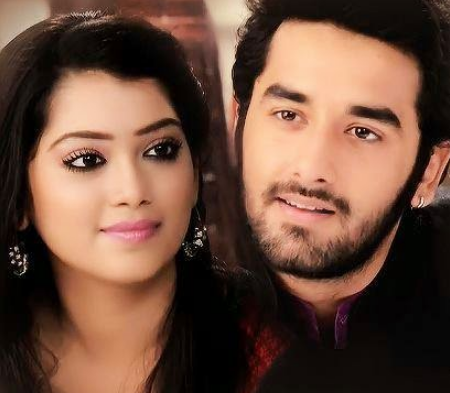 Veera has made it up to Baldev and apologized to him for making him wait in the rain for two hours and tells him she was stuck at the recording studio, as Ranvi was facing some problems. She holds her ears and says sorry. Baldev forgives her. He asks her to say what she wanted to say since few days and was attempting many times. Veera tells him that she is in love. Baldev is shocked and tensed thinking who is that lucky guy. Veera says what she feels, whats love for her, it feels like flowers are falling on her, music plays in her ears and it rains and she wish to dance in it. Suddenly all these mentioned things happen with Baldev. The flowers fall on him, music plays and it rains too. Baldev is puzzled and asks her if you feel like this, then why am I experiencing like this. Veera then tells him that she loves him and Baldev is really happy. He too shares his feelings and reciprocates her love. They have a sweet hug and they decide to spend some time together.

The lovers meet up in the market where everyone disturbs them, as they are very known in the Pind. Everyone notices them talking, hanging out together and going on bike. Veera hides when she sees people staring them. It becomes a big problem as they could not find any place where they can be alone and have a peaceful talk. They always used to meet like this in public places, but as things have changed now, the love birds are shy and hiding their love. Ranvi’s first recording is very successful, thanks to Veera, who took him to the studio at night and made him practice all night to hit the right chords.

Everyone is happy with Ranvi’s success and throws a party for him. Ranvi sings a song on the stage and dedicates it to Gunjan. He expresses his love for Gunjan, and Veera teases Baldev to do the same. She challenges him to tell to the whole Pind that he loves her and should propose her infront of everyone. Baldev is a daring guy and he agrees, as he is also excited to share his happiness with everyone. He goes on the stage and takes the mic. He is about to say he loves Veera, and she cuts the wire if the mic. She then goes on the stage and stops him from saying anything. She tells him that she wants to keep their love story a secret as of now, and will tell both the families when the right time comes. So, its time for some romance in the show which everyone will surely enjoy. Keep reading.