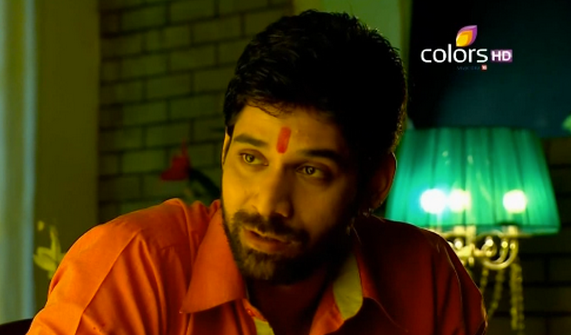 One can’t imagine if some women exist like Leela in MEIEJ. She is so selfish and cunning, always at her cheap tricks and has now found a helping friend in Agni. Bhanu is freely roaming and since RK has left Dau ji’s home, Bhanu is daring to enter there because of less security. Bhanu has been making Tara mad by taking off her anklets at night, and also her jewellery. She complains to Dau ji, but Agni tells her there is no outsider in their house, so maybe she forgot the anklet somewhere. Tara is sure something fishy is going on. This happens again with her the next night and now she becomes double sure, but Dau ji does not believe it.

Bhanu goes to Madhu to kill her, but steps back seeing RK come. He keeps an eye on RK and sees how honestly RK is living his life, and working so hard at night as taxi driver and at his garage in day time. Bhanu sticks near them to get a chance to harm Madhu and her child. He wants to kill Dau ji’s dream of getting a heir. Leela is always shown arguing with Bittu ji for petty issues and tries to influence him for not supporting Madhu and RK financially, but Bittu listens to only his heart. Bittu ji had invested in RK’s garage and became its 50% partner. Madhu makes Leela happy by making her do the inauguration as the chief guest. Leela is angry as there is not much money coming back as profit. On the other hand, Agni is worried for Bhanu, even after seeing him beat Dauji. How can she fall so low? Agni is beating Leela in selfishness and greed. With these two vamps around Madhu, will the villain succeed with their help in harming Madhu, or will RK save Madhu on time? Keep reading.