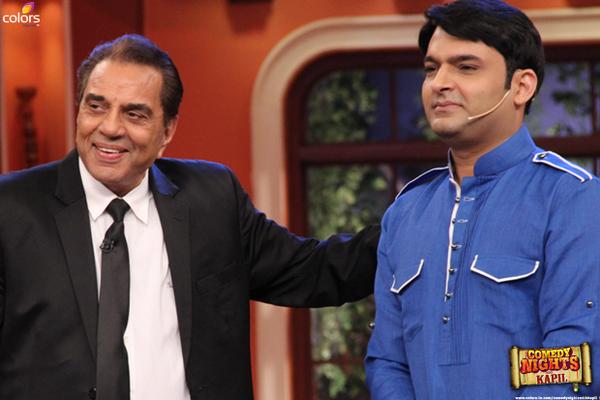 Kapil welcomes the show and speaks that at the time when the show started they were not aware of the success it has reached today and suggests that at that time legendary actor Dharmendra came on his show and gave blessing. He then welcomes Dharmendra and calls him the most handsome actor. Dharmendra ji comes on the stage and gets standing ovation from the audience. Kapil speaks of starting the show with 26 Episodes in mind and at that time Dharmendra ji wished that the show will run for many decades. Kapil then speaks that now the show is reaching 100 episodes (98 to be exact).

Kapil asks Dharmendra  ji whether his mother used to scold him even after becoming a superstar. He shares an anecdote of the time of his village when he was drunk and went to see his mother. He tried to disguise the alcohol smell by eating Elaichi but his mother has found out that he drank. He then started to take care of his mother by massaging her feet and she realized that he was drunk and suggested that he has done it well and wants him to drink a peck so then he can take much care. He tried to speak of not drinking and went away. Kapil asks Dharmendra ji that when girls flirt with him and at the same time his sons Bobby and Sunny paaji comes then what does he feel ? Whether he feels to be save or think why they have came there ? Dharmendra replies that after getting sweet smell from the beauty he tries to get hold of himself and be calm.

Kapil then welcomes the most beautiful Poonam Dhillon (Tu Na Apna Kaha) and gets standing ovation from audience members as well. Daadi comes on the stage with a bang (Rab Mujhe Maaf Kare Mera Insaaf Kare song) and dressed as a village girl and calls herself as Sohni (She enacts like Sohni played by Poonam Dhillon in the movie Sohni-Mahiwal, 1984) and Dharmendra as Mahiwal. She carries a pot as well and shakes her body well and dance. She then comes to Dharmendra ji and asks him whether she remembers her Soni. He calls her first as Daadi and then Daadi wants him to call her as Dolly. She then speaks that they are two Soni’s and wants to have a challenge and Dharmendra ji will be the judge and she even calls Poonam ji as Didi. 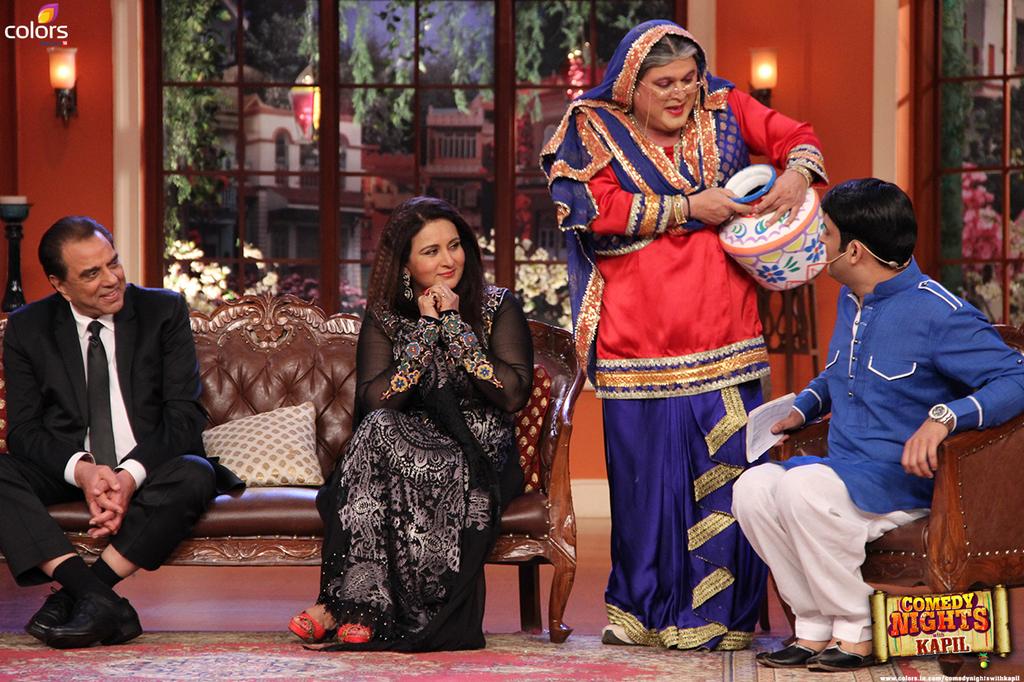 Bittu wants Daadi to imagine that there is a river which she needs to cross with her pot. Daadi caresses her body like a fish in the pond and acts like swimming on the river (which is a road on the stage there) bringing much lauughter. She finds a prawn, Octopus in the water and puts in her pot and finds a crocodile and shrugs her away and speaks whether she doesn’t have a Maa and machli (Mother and fish). Bittu speaks with Poonam ji that in her movie she used to wait for her love Mahiwal but in his case his grandfather Mahipal Sharma after seeing his Daadi threw her into a river. Daadi leaves from there. Kapil wants Dharamendra ji to speak a dialogue in Gujarati which is a request from audience.

Kapil speaks the dialogue – Maa ka Doodh Piya Hain To Saamne Aao..Thare Maa Doodh Piyo to Aa Bhi jaoo. Dharmendra ji speaks the dialogue not completely well but with ease bringing laughter. Kapil speaks of dropping Dharmendra ji on his moped bike which he brought specially for the occasion and takes him on the ride to revisit the golden moments from Sholay [Yeh Dosti..Hum Nahi Todega.. song plays.. In the epic movie Sholay Sr. Bachchan and Dharmendra goes on a bike ride]. Kapil hugs Dharmendra ji and expresses his love for him. The show ends on a happy note with Dharmendra ji returning the gratitude by showering love with a flying kiss.

Nice and Interesting Development:
Sunil Grover is back on Comedy Nights playing the role of Bittu’s Sasur, its one of the important roles as Bittu has always made a taunt at Manju by speaking bad about her father. There is a comedy gag will be shown today where Sunil playing as Kapil’s Sasur will hit a shoe at him (son-in law) and cites the reason that he threw it so that Bittu can touch his feet. Bittu has always degraded Mrs. Sharma’s father, brother, sisters and family so now is the turn of Sasur to play his cards and teach some lessons to Bittu. Tts great to see him back. Welcome back Sunil, best wishes to you. 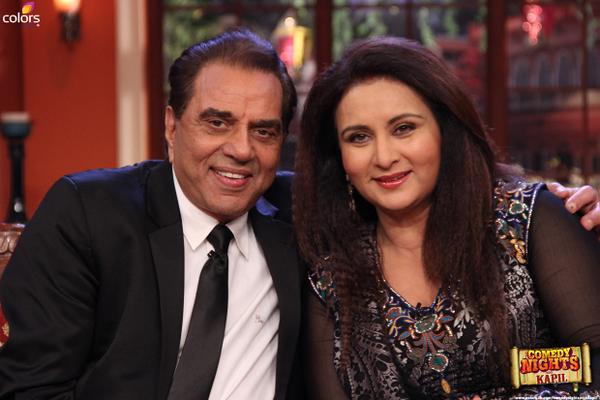