Jhalak Dikhhla Jaa 7 is in the eight week on Colors. In this week, all the contestants will groove on the remix songs created by music composers Sachin and Jigar. Today’s performers are Tara-Jean Popowich, Ashish Sharma, Kiku Sharda, Kushal Punjabi, Mouni Roy, and Puja Banerjee.

Ranvir and Manish wants Madhuri to enact a scene in classical form which depicts something is inside Remo’s beard (Daadhi Mein Tinka in hindi). Madhuri accepts their request and enacts that scene through her facial expressions and eyes very well. RJ Malishka who acted as a policewoman in her chor-police act yesterday will be pulling the leg of Ashish and suggests that he has all the qualities of a perfect man.

* Tara-Jean Popowich dances with her partner Jacky in a rocking hip-hop dance with five different styles on the songs Chaar Bach Gaye Party Abhi Baki Hain from the movie FALTU 2011 and the song is sung by Hard Kaur.
– Dance form: Hip-Hop/House
– Score: 30

* Kiku Sharda will be performing as himself and becomes Palak’s brother on stage for the first time on Jhalak. He performs on the song Johnny Johnny.. Haan Ji Toone pee hai? Na ji…Muh ko kholo, Ho ji…Jhooth boleya? Na ji from the movie Its Entertainment.
– Dance form: Hip-Hop
– Karan compliments Kiku that he got many bells after seeing his performance and entry.
– Score: 26

* Mouni Roy dances with her partner Puneet by mixing classical dance style with Robotics. She dances in classical style and Puneet enacts the dance as a robot to depict an offbeat love story. They perform on the song Teri Galliyan from the movie Ek Villain.
– Score: 30

* Ashish Sharma dances with her partner Shampa with much aggression and is seen in black dress performing on the Paso Doble dance form. It will be full of intensity and honest. The song is Dil Sambhalja zara from Murder 2 movie.
– Score: 24

* Kushal Punjabi and Puja Banerjee will be having a face-off dance round.
* Kushal is seen in the character of a tiger with his partner Mohena Kumari and shows aggression and hunger in his looks like the one of a chase. The dance style is Afro and he danced on the song with Hai Jo Laahon mera bezubaan from the movie ABCD.
His dance has a global message which we will find out tonight which might be Save Tigers or Forests. He is also supporting an NGO for girls.
– Score: 29
* Puja dances with her partner Rajit on the song Khoon Chusne Aaya bloody from the movie Go Goa Gone.
– Score: 25
* Thus, Kushal wins the face-off round.

Development
* Puja Banerjee is eliminated after the face-off round where she compete with Kushal Punjabi. Kushal emerged winner and survived the elimination. We wish Puja the best in all her future work endeavors.
* Next week, the contestants will be competing in the Kurukshetra theme.
* The Guests on Jhalak next week are Actor and Megastar Akshay Kumar for promotion of his movie Entertainment, and Kareena Kapoor Khan.
* Akshat will be seen in the attire of a girl in his dance performance. 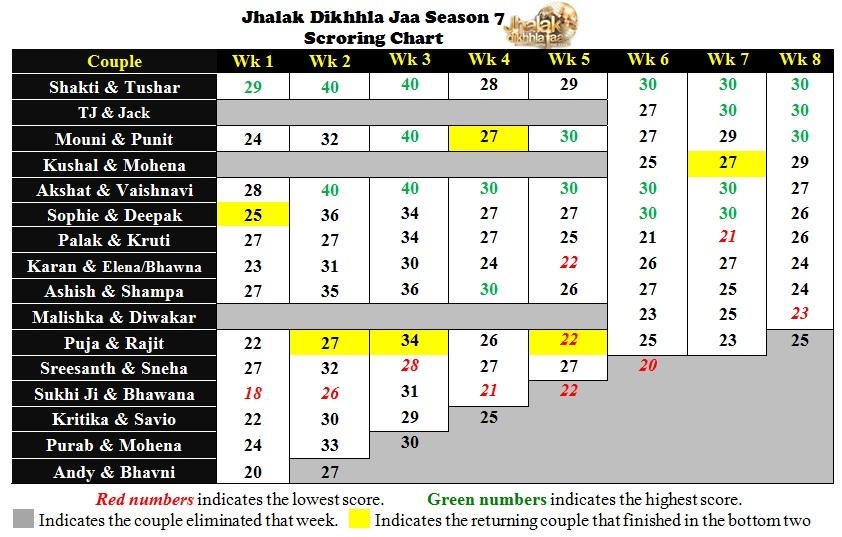