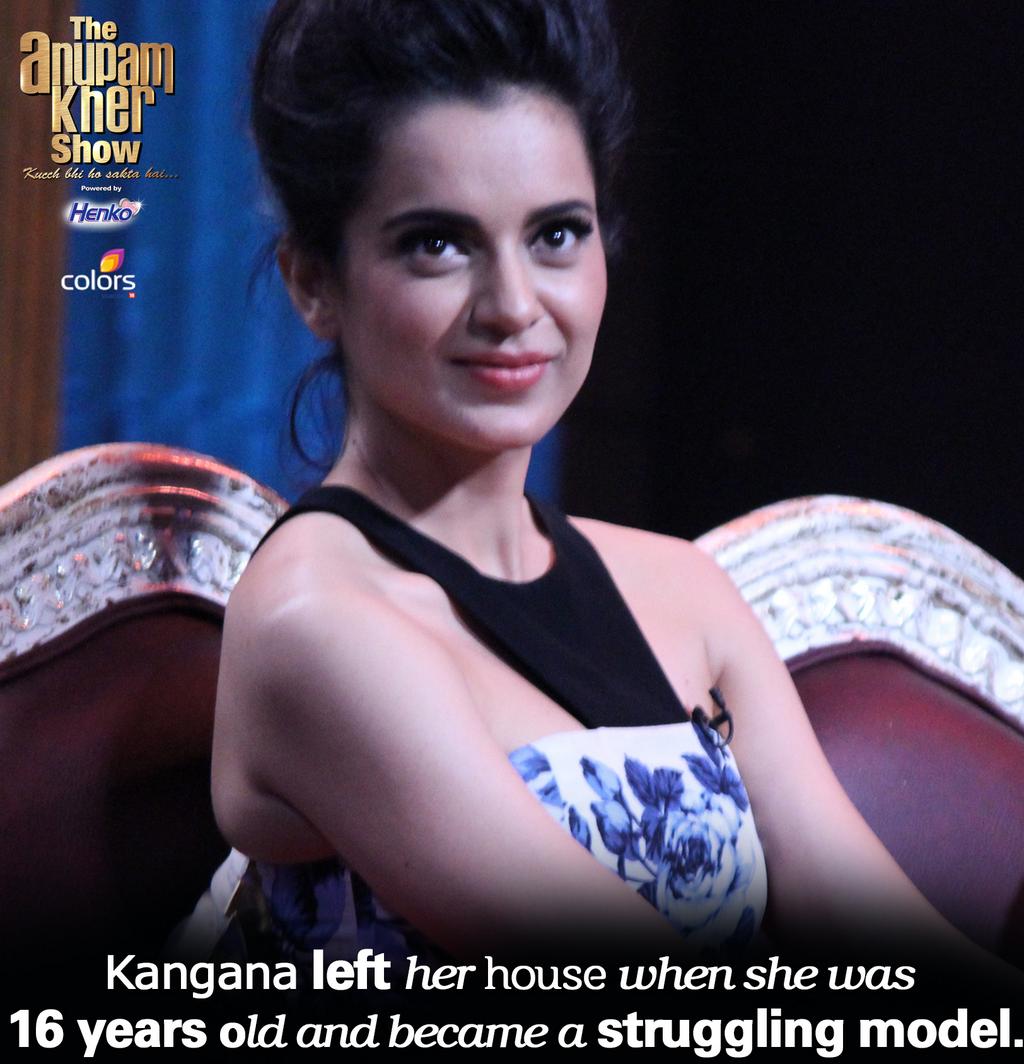 The Anupam Kher show has the format of a talk show with the veteran actor speaking candidly as well as posing tough questions. Actors, filmmakers. television and sports personalities are invited on his show. Guest on the show today is Kangana Ranaut – Actress with Critical and Commercial success and Superstar.

Anupam ji starts the show and speaks about the guest coming on his show and refers that this person has seen lots of up and down, faced criticism and then reached great heights. He speaks of seeing himself in that person. Hardwork and dedication are engraved in this person and then welcomes Kangana by saying queen of heart and an example of women empowerment, Queen of Himachal. Kangana comes on the stage on Poora London Thumakda song from the movie Queen (Kangana starred opposite actor Raj Kumar Rao). She comes and hugs him. Anupam ji asks whether she informed her family before leaving to Mumbai. Kangana replies of informing her family and her grandfather has suggested that she is a fool and will do such things. After informing her family that she got a film they became more sad and asked her with whom she will work. She responded Emran Hashmi the actor who worked in the movie Murder and laughs. Her family asks whether she will do the same scenes like the movie Murder. She replies that the movie is doing is Gangster and it doesn’t have such scenes but the hero is Emran Hashmi.

Anupam ji asks her that after winning the national award a big actor has told her as a compliment that she has achieved all. She replies that the big star has told her that she has done 1 film which is equivalent to 100 films which he did. Anupam ji asks about the star’s name and it will be shown in the episode telecast. She then speaks of not doing fashion movie since she has earlier worked in title role in movie Gangster. She speaks of being having an angry nature. He asks what is an example of her angry nature. She replies candidly that suppose if she comes on a talk show and she is being told to dance on one of her song then she will be a bit upset. Anupam ji humorously wants his team to cancel the dance number with her on the set.

Sooner then, Anupam ji asks her how romantic is she by nature ? She replies of liking poems and likes to have conversation with intelligent men and then Anupam ji asks her whether she knows some quotes or short poems. She shares a quote – Ye Ishq Nahi Aasaan Ghalib Bas Itna Samaj Lejiya. Bas Aag ka Dariya Hain Aur Doob Ke Jaana Hain.. Anupam ji then asks her what is the bad thing inside her ? She replies of not having any bad thing and he speaks that she is very sweet. She speaks of praising people though she didn’t want to. He asks her what is the moment when she understood that anything can be possible (Kuch Bhi Ho Sakta Hain) ? She speaks of getting a bocquet with a great compliment from Amitabh Bachchan after the release of Queen movie. After seeing it, she felt goosebumps and felt very happy.

Anupam ji at the end of the show gives her a memento which has the message – She is an example of perseverance, hardwork and dedication. She has already achieved so many things at a young age when many people in that age just searches for their existence. At the age of 21, she won a national award which showers the strength of women empowerment, she is just not an actor but also the ego and proud feeling for people living in small cities. She has a positive attitude and we want her skills to be more impactful. Finally, Anupam ji wishes that she will inspire all through her films. Stay tuned to The Anupam Kher Show tonight @ 8 PM on Colors.