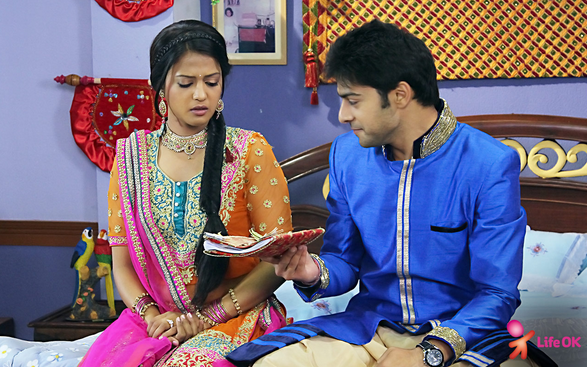 Bebe has become very helpless, as her true son Sameer is in Iqbal’s clutches. She thinks she can’t ruin Meher’s life and wanted to stop her from this marriage, but Iqbal cunningly marries Meher and brings her home. Bebe wants to tell Meher the truth, but Iqbal threatens her that he will kill Sameer. Bebe has to dance on his fingers now. Bebe decides to keep Meher away from Iqbal, as he becomes shameful and reminds her of his Suhaagraat with Meher. Bebe warns him not to touch Meher. She thinks how to tell Meher that this is not her son, this is not Sameer, but a traitor who is ruining their happiness by the big deceive.

Meher is eager to meet her husband Sameer, as she does not know its Iqbal. Meher apologizes to Bebe for marrying in hurry, but it was all Sameer’s plan to give everyone a surprise. Bebe scolds her for being so desperate and punishes her to sleep in her room tonight and distance herself from Sameer. Meher agrees but finds it tough to keep her promise. She wakes up at night, and tries to go to Sameer while Bebe is sleeping. Bebe could not sleep all night to keep guarding Meher and catches her asking her to sleep and not meet Sameer/Iqbal.

Iqbal too wanted this as he does not want to make any relation with Meher, which would later on ruin her life. Meher bumps into Iqbal in morning and romances. He limits himself while she attracts him. Bebe gets angry seeing her with her and tells her that he is not her son Sameer. Purab gets a hint and starts finding the clues again. Will Purab get the truth out of Bebe’s mouth? Will Iqbal be caught? Keep reading.