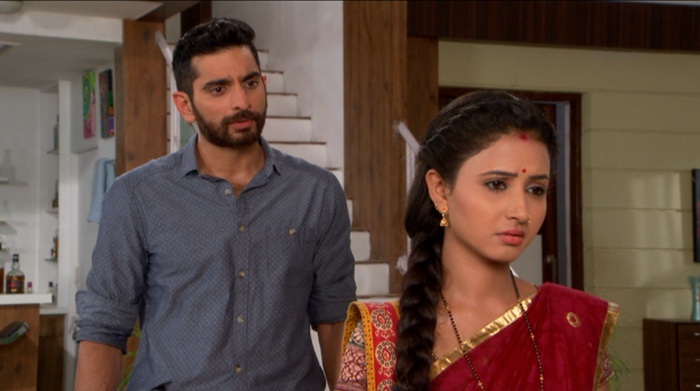 Barkha is stooping very low to make Lajjo lose the competition as she is worried that Nikhil will bring Lajjo back home once she wins the competition. She goes to meet Kabir and gives him a blank cheque, asking him to fill it by his wish, but do anything it takes to make Trishna lose the competition. Kabir accepts her offer and hires a goon to kidnap Mili, as he knows Mili is Sagar and Lajjo’s weakness. Lajjo gets worried knowing about Mili gone missing, just before her competition. She goes to find Mili, but Sagar asks her to focus on the competition first and he promises her that he will find Mili. Lajjo goes on the stage as Trishna, and is not afraid to face her fears.

She enters the final round of her dance competition, and breaks all records to win it by good margin. Ratri falls during her faceoff dance while Lajjo continues dancing with her ghungroos, even when it breaks and hurts her feet making it bleed. It was Ratri’s plan to damage the ghungroos to make Lajjo fall, but she failed in her evil trick. Sagar is really happy seeing Lajjo win, and brings Mili safe. Kabir is unable to take his defeat by Sagar. Nikhil and his family witnesses Lajjo’s victory and are very happy seeing her as the winner Trishna. Barkha is very upset and feels she hired two losers Kabir and Ratri to make her work done. She makes it clear to Nikhil that even if Lajjo has become Trishna, she won’t accept her as her daughter in law.

On the other hand, Nikhil breaks open his briefcase and gets the diamonds. He understands Khanna is using him to smuggle the diamonds without his consent, and confronts him. Khanna threatens to harm his family if he does not continue doing this work. Their arch rival Katiyal asks Khanna to stop this work, else he will shoot Nikhil the moment he finds him in his workplace. Khanna informs Ranawat about this, but Ranawat cares a damn for Nikhil’s life and asks Khanna to send Nikhil for his next trip. Ranawat risks Nikhil’s life knowing Katiyal won’t dare to kill him.

Sagar is upset knowing Lajjo will be going back to her husband Nikhil and controls his lovely feelings in his heart. He respects Lajjo a lot and wants to stay as her secret admirer. Sagar loves Lajjo a lot for her simplicity, which he found very unique and heart touching. Anjali understands Sagar’s concern for Lajjo and asks him to limit his feelings, as they both know Lajjo is happily married to Nikhil and Sagar won’t have any future with her. Will Sagar’s feelings come out any day? Well, Barkha will get to know about Sagar’s feelings and try to manipulate it against Nikhil and Lajjo’s relation. She will try hard to showcase Lajjo as a cheat to Nikhil, making Sagar stand up for Lajjo’s respect. How will Nikhil save himself from Ranawat? How will Lajjo win Barkha’s heart? Keep reading here to find all the answers.