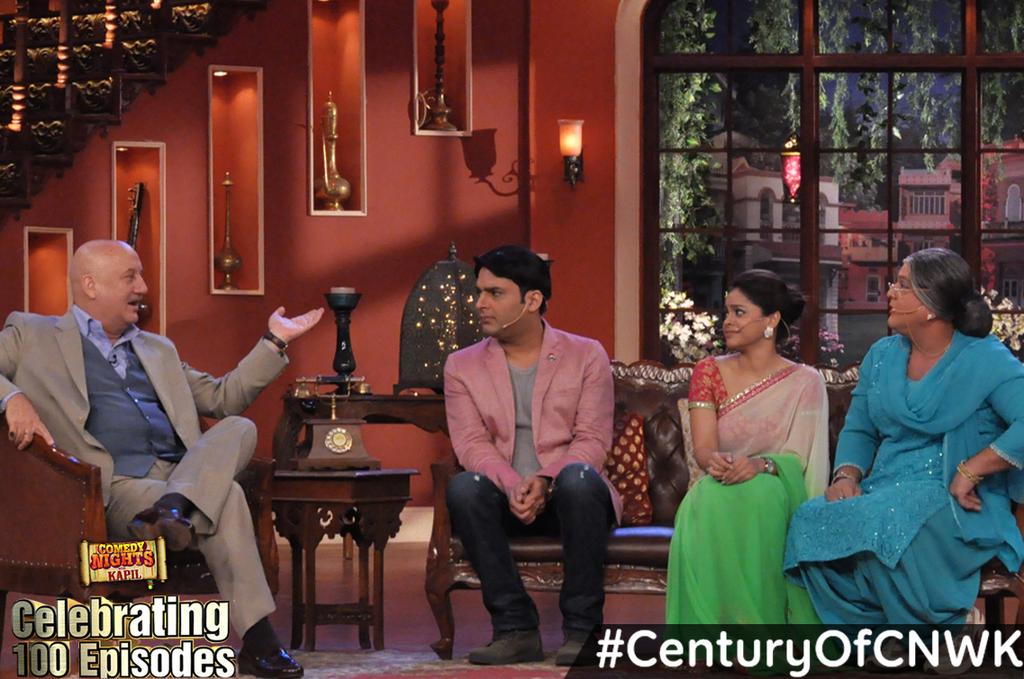 Guest on the show: Anupam Kher – legendary Actor, Producer, Director and Host.
Additional Note: Comedy Nights will be completing 100 Episodes this week. Tonight will be the 99th Episode.

The show starts with Daadi lying on the floor in drunken state in the hell and Ramu acts as the Yamraj (Yamkumar) and Bua is also there as Yamraj’s ally. Daadi learns that she is dead and makes her Phoeee sound. Bittu comes as friend Gupt from Yamraj and Yamraj asks whether Daadi should go to hell or heaven. Gupt informs that Daadi should be given tough punishment. Sooner, Mrs. Sharma’s father comes there and he also learns that he has also died. 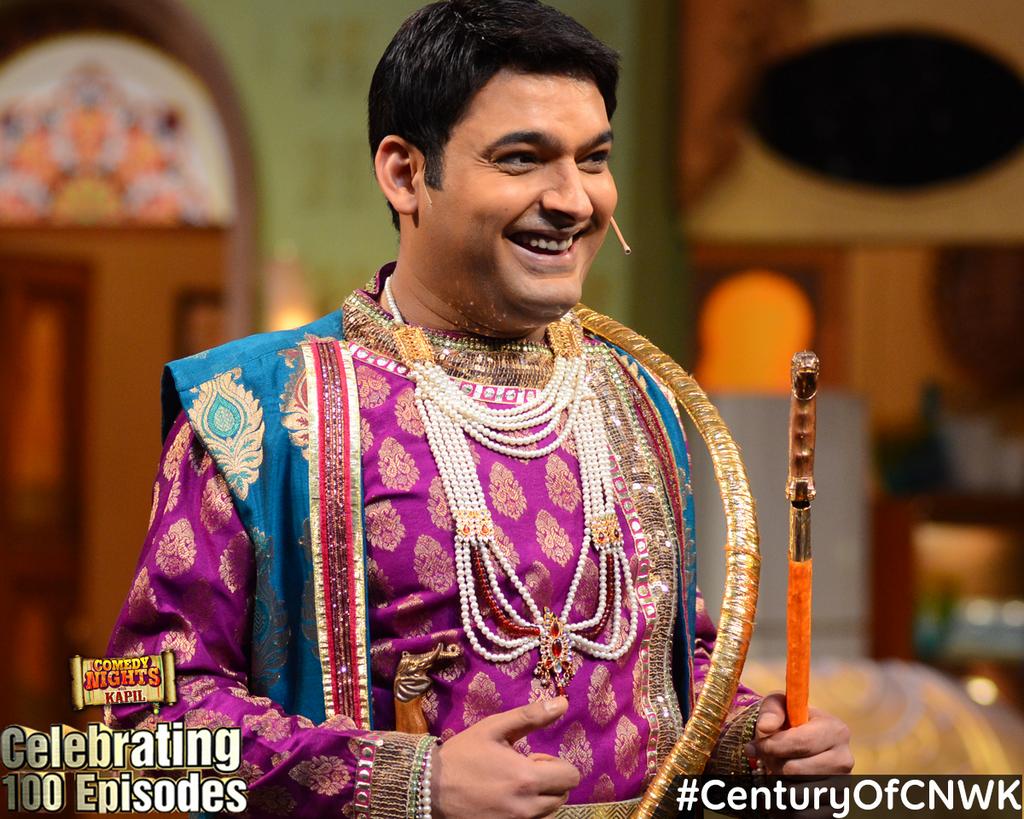 Daadi makes a taunt that whether he used to run an NGO on the earth and why is he so worried about his death bringing laughter. After that comedy gag, Kapil comes and welcomes all. He speaks that if there is true hardwork and dedication then human can achieve anything. Furthermore, speaks on the guest that will come today who has achieved so much with his talent and dedication and he then welcomes legendary actor Anupam Kher and refers to him as the finest actor of the Indian film industry. Anupam ji comes on the stage and gets a warm welcome from Kapil. Kapil calls Anupam ji as his Guru since he has won 5 times filmfare award for comedy. Kapil then asks him how is he doing ? Anupam ji replies Sensational with a smile. Kapil thinks that he has asked a wrong question since the last 30 years he has seen Anupam ji looking same. Anupam ji asks him what does he mean, whether he looks old when he was 25 as well ? Siddhu steps in and suggests that now Anupam ji is bald which was not earlier.

Kapil asks Anupam ji about his journey from his start from Shimla to his first debut movie Saaransh. He replies on having a long journey and also cites that at the age of 19 his hairs were beginning to fall and he took courses in Chandigarh for 3 years and then went on to take another three years of course at National School of Drama (NSD) in Delhi and went to Lucknow for teaching. He came to Mumbai on 3rd June, 1981 and cites that now though he is bald but has a dignified look and reminds of the time he came to Mumbai (1981) when his hairs used to fall in random way and he was very thin as well. He doesn’t use to get jobs since he doesn’t have hair and people want a hero who have hairs even with  less acting skills. Anupam ji speaks of his address where he used to live in the home of a dry-cleaner lady (landlord), and the address was Anupam Kher, 2/15, Kher Wadi, Kher Nagar, Bandra East. Kapil becomes amused on hearing it. Kapil now suggests that he will speak some dialogues which Anupam ji has to speak but in different way. The first dialogue is – Tum Jab Baarish Mein Beegh Jaati Ho.. Aur Bhi Zyada Sexy Lagti Ho and informs that Anupam ji has to speak this dialogue but in a tearful and sad way. Anupam ji speaks the same dialogue in a teary and sad way and shows all the sad emotions on his face. 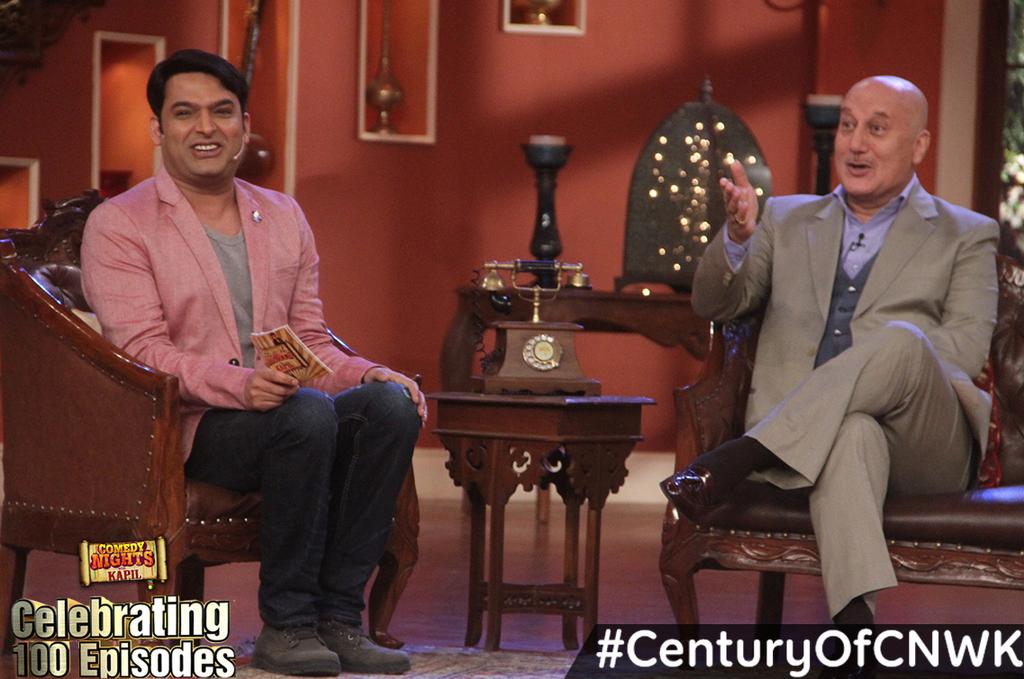 Kapil speaks of another dialogue – Kutte Mein Tera Khoon Pi Jaoonga and suggests that Anupam ji has to say this dialogue in romantic way. Anupam ji speaks that dialogue in a romantic and in a cheesy way with much softness and oomph. Kapil speaks the next dialogue is – Maa Meri Naukri Lag Gaye Hain.. but he has to say in angry way. Anupam ji speaks the dialogue in angry way and also stands up and while speaking approaches Kapil and fumes at him. Anupam ji shares a humorous event where few bald men come together and sing a song on themselves – Aaye Mera Bichda Baalooen Phir Se Ugg Aayo Saalo Rahe Gaye Do Kaan. bringing laughter.Daadi comes on stage and is seen with Mrs. Bittu Sharma (Manju). Anupam ji asks her why she drinks so much. Daadi in her usual self speaks of drinking not because of  happiness but because of helplessness bringing laughter. She then asks him whether he wants to share a drink with her. Anupam ji replies in a cute No and then Daadi touches his chin and does her Oleee sound. He also reciprocates in the same way and creates much bigger Olee..yaayy sound.

Bua and Raju comes on stage and Anupam ji asks Bua about her age with much sincerity, she replies 22 year old. He replies on knowing her since 25 years and this is the 99th Episode of Comedy Nights and the show ran for 1 year already so she might be 23 years old (a taunt). Bua becomes annoyed after hearing it and asks him whether he is an accountant and speaks of not liking it. He calls her Bua ji and Bua becomes shocked and calls Anupam ji as Annu and speaks of her love for him. In the film Karma when the legendary actor Dilip Kumar in his role has slapped Anupam ji on his face then she got pain and hurt in her heart. Sooner then, both dances with finesses on the Tum Paas Aaye Yoon Muskarein song from Kuch Kuch Hota Hain. Bua flirts with Anupam ji in their dance movie and wants him to hold her tightly. She gets a warm hug from Anupam ji after the dance. Kapil signs off by saying to people – keep smiling, and watching his show every Sat/Sun @ 10 PM on Colors. Additional Notes:
* Anupam Kher was born on 7th march 1955. He has worked in 470 films till date and 100 plays. Apart from Bollywood, he has worked in Hollywood most notably the 2013 Oscar nominated movie – Silver Linings Playbook.
– Held the post of Chairman of the Censor Board and National School of Drama in India
– Honoured with the Padma Shri in 2004 by the Government of India for his contribution to Indian cinema.
– Won the Filmfare Award for Best Performance in a Comic Role five times, more than any other actor. Upcoming movie: Humpty Sharma ki Dulhania (Varun Dhawan, Alia Bhatt). Read more at his Wikipedia page.

* Actors and Superstars Ajay Devgn and Kareena Kapoor Khan will be gracing comedy Nights tomorrow 3rd August 2014 for the promotion of their movie Singham Returns.