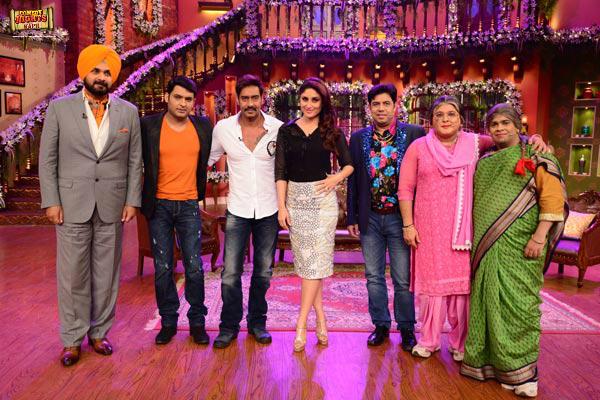 Guest on the show tonight: Actors and Superstars Ajay Devgn and Kareena Kapoor Khan for the promotion of their upcoming movie Singham Returns. Tonight’s episode is the 100th Episode of Comedy Nights with Kapil.

Pankhudi and Daadi are on stage and are doing an aerial fight and hitting each other while being stuck in the air and standing. Kareena dances with Kapil with much chemistry and oomph on the Ek Ladka Ek Ladki Ki Yeh Kahaani Hai Nayi Do Lafzon Mein Bayan Na Ho Paye from the movie Bodyguard. Kapil feels elated to dance with her and seems to have a gala time.

Gutthi is back with a bang and Bittu and his family sings a remixed version of Chitti Aayi hain epic song and sings Gutthi Aaye Hain Gutti Aaye hain Bade Dino ke Baad Goregaon Meera Road Malad Pata Nahi Kaha Se Aaye hain bringing laughter. Kapil will don the role of his famous character of Inspector Shasmher and will be in the usual self being witty, bold, humorous and sarcastic at the same time. Stay tuned to Comedy Nights tonight @ 10 PM on Colors for the celebration of 100 episodes. Warm greetings and wishes from Tellyreviews to Kapil and his team.