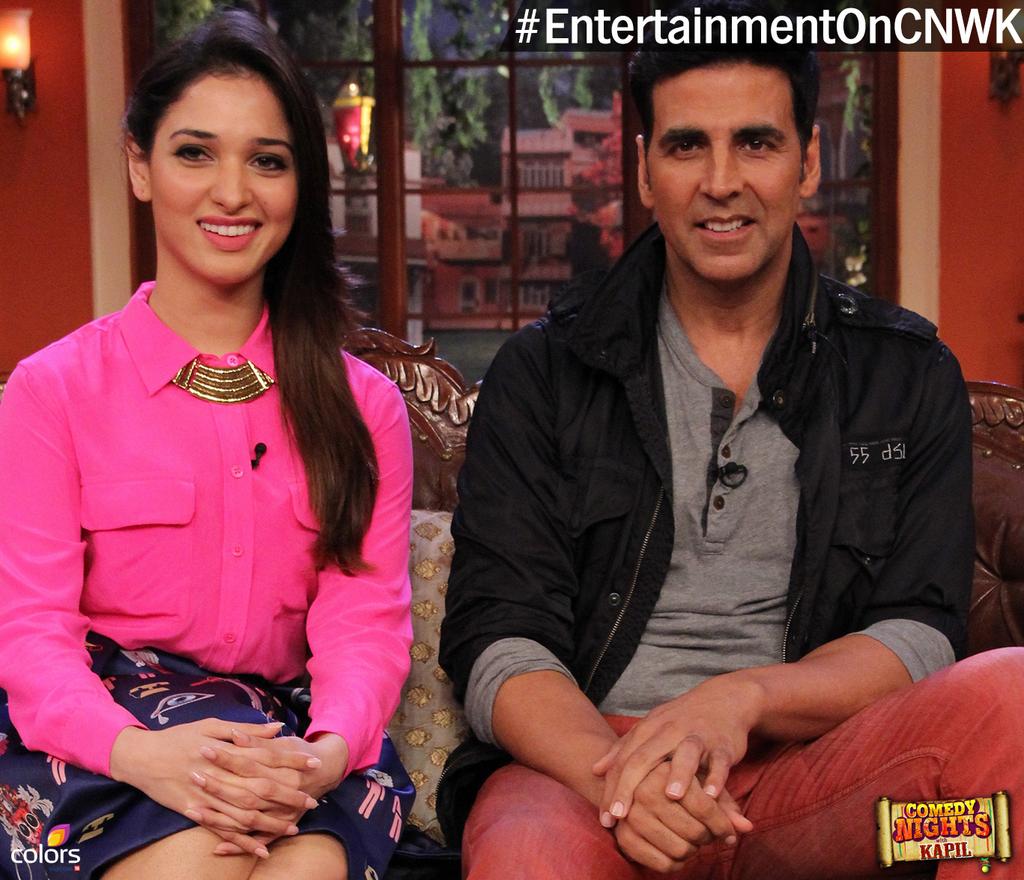 Guest on the show tonight: Actor and Megastar: Akshay Kumar, Actors and Stars – Tamannah Bhatia, Sonu Sood, Veteran Actors and Stars – Mithun Da and Johnny Lever, the cast of movie – Entertainment. Tonight will also be the wholesome and grand introduction of popular character of Comedy Nights Gutthi (played by Sunil Grover) who will get a rousing welcome.

Kapil welcomes all and speaks of the time when people used to watch Cricket before used to like the sport but now they watch it because they get entertainment. After every four or six, girl starts to dance  (referring to cheer girls) and thus public looks for entertainment everywhere. Therefore, they have invited the star cast of the movie Entertainment. Legendary actor Mithun Da and Actress Tamannah Bhatia comes first on the song (Veerey Di Wedding song plays) and then comes actor and Megastar Akshay Kumar but very casually and then greets Kapil. Siddhu speaks that when we have Akshay, Mithun Da, Tamannah, Johnny and Sonu then there is the rain of entertainment for sure. Then comes actors and stars Sonu Sood and Johnny Lever on the stage. Sonu speaks on the phone that he has song picturized on him and speaks to the caller on other end that he has the main role.

Kapil then opens the floor to the audience and a girl from the audience speaks that Sonu has last time removed his shirt but she haven’t attended that episode and now as she is there wants to see Sonu removing his shirt bringing laughter on everyone. Sonu sportingly accepts her request and removes his t-shirt and shows his six-pack body. The audience girl feels happy and Kapil also wants Sonu to have a ramp walk which he graciously accepts and does the ramp walk and greets Siddhu at his table. Sooner then,  Akshay comes from behind and takes away Sonu’s shirt and jacket and gives it to the audience bringing much more laughter and stranding Sonu without his shirt. Kapil speaks to the audience that women will wish a husband like him because he can serve many purposes – he can work in the kitchen and you can keep cutlery at his six packs abs, good looking bringing much laughter. Sonu then takes back the shirt and jacket from audience. Palak comes on stage wearing a construction site orange cap and some cushions to support her body. She speaks of sharing a good news and Bittu asks her whether she is becoming a father. She challenges Bittu and asks him whether she should make him quiet at the same moment. She then wants Bittu to watch and calls her elder sister. Gutthi comes with a delicate bang with audience chanting her name – Gutthi Gutthi.. and with finesse and carries her bags. 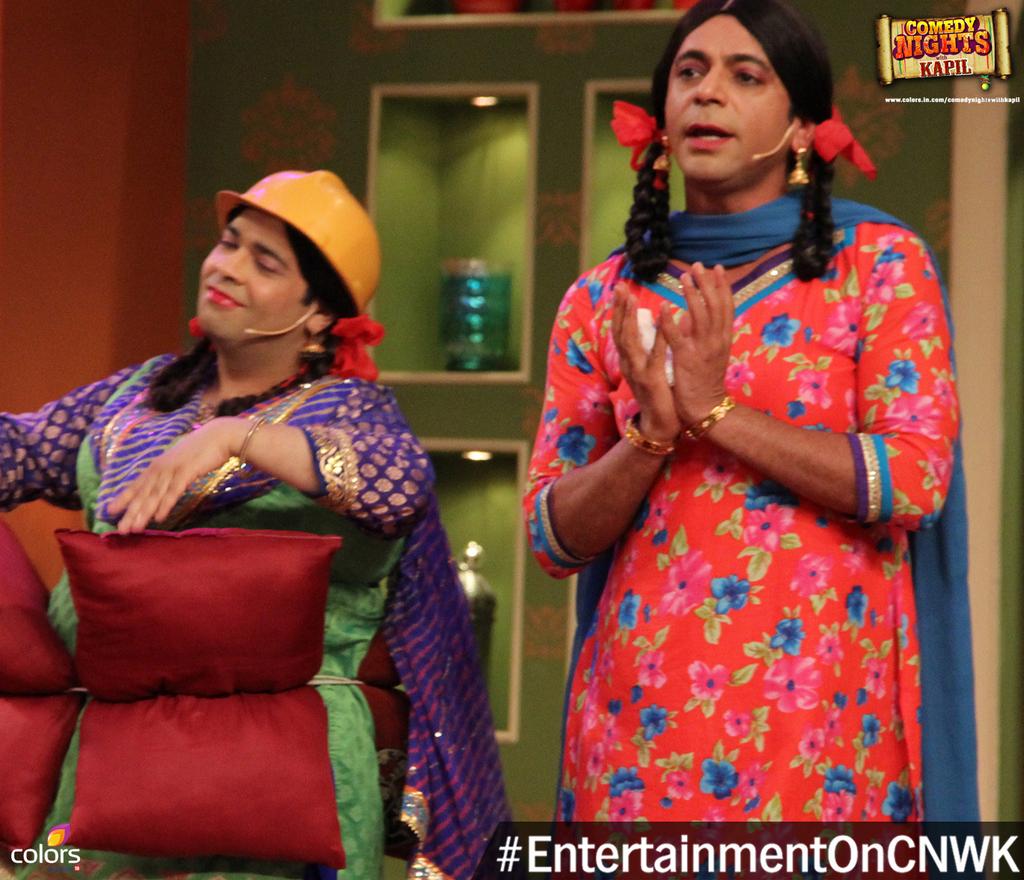 Gutthi comes on stage with her bag moving her lips and is then greeted with much passion by Palak who shares a warm hug with her. While still carrying her bag, Gutthi asks Akshay whether he is Akshay, right ? Gutthi then goes on with her trademark introduction – Akshay -> Gutthi, Gutthu -> Palak, Palak -> Sonu, MithunDa -> kapil, Kapil  -> Audience, Audience -> Gutthi, Siddhu ji -> Camera, Camera – Modi ji. She speaks of saying Modi ji because she travels Delhi often. Tamannah asks Gutthi where she were these days ? Gutthi replies of going to America (USA), and then Kapil informs the audience that Gutthi is lying since we all know where she was seen (referring to Gutthi on Mad in India comedy show on Star Plus). She then asks if everyone has seen then why it haven’t clicked bringing more laughter. Palak reminds Akshay that when he came last time on Comedy nights (for the promotion of movie Holiday) he has hit her with a flying click and until now she haven’t forgotten about it. She then speaks that when Akshay came for the first time he had done a romantic song with Gutthi her elder sister so she requests him dearly to have a romantic song another time now with her sister. Gutthi later will also sing her trademark song – hool khile hain ‘Gulshan Gulshan’ with Palak.

Additionally, there are more fun moments on the show. Daadi will be seen in the dress of a dog and like always will make sure that she will succeed in her mission to kiss Akshay and Sonu. Bua at her end will want Akshay to propose to her since she is a 22-year old girl. Bua will be confused a bit after seeing Akshay and Mithun Da’ s reaction. Tamannah will give some romantic tips to Kapil/Bittu which will help him. Moreover, Entertainment and Zanjeer, the dogs will also be a guest on the show and will have nice moments with Akshay.

Gutthi informs Akshay of forgetting the dance and Akshay says its fine and he speaks that time will teach things to everybody. Gutthi dances while walking backwards towards Akshay on the song and also comes close and caresses his body a bit (Tera Naam Doon song plays). Akshay also reciprocates the same feelings like her and then drags her by lifting her legs and Gutthi moves her body on the ground even like a snake dance. She then stands up and does lot of Adaa and Oomph with Akshay. Kapil  thanks them for coming on the show and wishes their movie Entertainment is a super hit and blockbuster and sings off by saying to people watch his show every Sat/Sun on Colors @ 10 PM. The show ends on a happy note with people greeting each other with Johnny Johnny song plays in background.

Additional Notes:
* Akshay’s movie Entertainment released yesterday on 8th August and is a comedy movie directed by debutant director duo Sajid-Farhad. Read more at its Wikipedia page.
* This is the fourth time that Akshay came on Comedy Nights. He came for the first time with Sonakshi Sinha and Imran Khan for the promotion of Once Upon a Time in Mumbai Dobaara, second time with Ronit Roy, Shiv pandit, and Aditi Rao Hydari for the promotion of the movie Boss, for the third time came alone for the promotion of movie Holiday.
* Akshay obtained a black belt in Taekwondo in India and studied martial arts in Bangkok, Thailand. Taekwondo is a korean martial art which combines combat and self-defense techniques. Read more on Taekwondo at its Wikipedia page.
* Akshay will seen on TV on Life OK’s upcoming show Dare to Dance