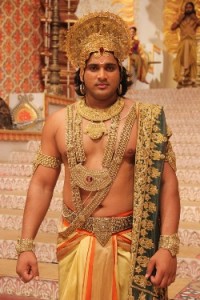 Earlier, Shakuni (the chief strategist of Kauravas and Mahabharat War) has been killed by Sahadev and Bheem throws his body in the lake and Duryodhan runs to find Shakuni’s body. Bheem and Duryodhan starts a fight there and Duryodhan continues to have upper hand on Bheem injuring him while Bheem at his end tried to follow all the learning he learnt from Hanuman. Draupadi on her end learns from Balaram that the human’s weakness is his biggest sin and then comes to the lake where Duryodhan and Bheem were engage in a duel. Duryodhan continues to beat Bheem badly and Krishna informs Draudpadi that humans need to find victory with their own efforts and suggests that he cannot help her and she then speaks that a wife and husband are one soul and she will help her husband Bheem. Krishna informs that he was actually waiting for her and this war also belongs to her and without her help this war will not be complete. Draupadi asks Pandavas why only Bheem is fighting alone and then Sahadev informs her that he is very sure that she came with the solution of knowing Duryodhan’s weakness. She replies yes and then shouts at Duryodhan and informs him that how much human’s parents good work can give much protection but the human’s own big misdeed will truly be his weakness. Duryodhan replies there is no weakness in him and he is the strongest of all and Yudhishtir speaks that he was always egoistic and suggests that his heart is the weakest part. He then suggets Bheem to attack Duryodhan’s heart and Bheem does but the attack goes in vain. So, Duryodhan speaks of loving his family, sons, friends and suggests that Yudhishtir is wrong in telling that there is no love in his heart. He goes on inform them that even the Himalayas fall on his heart it will not effect him.

Nakul speaks that Duryodhan’s head is his weakness where all the bad things are cooked up and Bheem does the same and again in vain and Duryodhan speaks of having Dharm on his head and vows to kill Nakul in the end. Arjun speaks that Duryodhan’s biggest weakness is his Jhanga (upper part of his leg) since he told Draupadi to sit on them knowing well that she is the wife of his cousin brothers. Arjun thinks that is the biggest misdeed of Duryodhan and also will be his biggest weakness as well.  Duryodhan becomes a bit worried and attacks Bheem with his Gada and he stops it and remembers Duryodhan’s insult on Draupadi in the Yud Sabha where Duryodhan wanted Draupadi to sit on his upper leg (Jhanga). Bheem after learning it hits Duryodhan at his upper right leg. Duryodhan informs Bheem that he is not following the rules of Gada fight and he responds on following his promise of attacking his upper leg which he has made in the Yud Sabha. Duryodhan runs for his life since his upper leg is getting wounded severely and Bheem puts the final attack and hits Duryodhan very hard with a Gada and much force making him bleed profusely. Balaram comes there and informs Bheem that he will ask him question on why he broke the rules and vows to punish Bheem for breaking the rules.

As Balaram is about to attack, he is stopped by Krishna who informs him that he is fighting on the side of Duryodhan. Krishna reminds Balaram’s promise to not participate in the war and thus he will be doing a wrong. Balaram responds that Bheem after breaking the rule of Gada fight has done a big Adharma and even if he does Adharm to punish Bheem then he will do as well. Krishna speaks that Balaram will also be doing Adharm to punish an Adharmi so what is the fault of Bheem then. Balaram stops from giving punishment to Bheem and speaks that Krishna is the foremost in creating strategies with Maya. He doesn’t have answer for Krishna’s point but suggests that Krishna has done a deceit with his elder brother as well. Krishna smiles and speaks that Balaram is his elder brother so if he doesn’t do with him then with whom he should do. Krishna speaks that the environment has set the deceit as the way for development and if Bheem follows Dharm then the society would have received a big Adharm and Duryodhan’s defeat was necessary. Duryodhan is severely injured and in Hastinapur, Dhritrashtra finds the last lamp went off and cries with Vidur and Sanjay. Vidur tries to console him and speaks of his acceptance of defeat and will also admit all mistakes of life and just want to see his one child alive. He wants mercy from Pandavas for him and cries profusely.

Gandhari is crying a lot in the Kuru camp (shivir) in Kurukshetra and there comes Kunti and she asks why did she come ? Gandhari wants Kunti to see the destruction and calls her sinful Kunti because her sinful sons have killed his sons. Gandhari then wants to kill Kunti by beheading and Kunti accepts it and then takes a sword and stops short of beheading her and cries. Kunti hugs Gandhari and tries to console her. Kunti speaks of sacrificing everything and has become the servant of Dhritrashtra and Gandhari. Gandhari speaks that she cannot become his servant (Daasi) and instead is her support and wants to go from there for atleast a second as well. Kunti then informs Gandhari that Pandu’s sons Pandavas are waiting outside for her blessings and she informs of giving them in Hastinapur. Gandhari also suggests that now because of her pain and angry state of mind she can only give curse to Pandavas now thus doesn’t want to see them. Draupadi suggests to Gandhari in giving her all her pain, revenge and curse since the revenge was started from her heart. Gandhari speaks that its true revenge’s fire first started from her heart making Draupadi more nervous. It will be seen now that Ashwatthama finds Duryodhan at his death bed and Duryodhan just wishes to see Pandavas’s blood before his death. Ashwatthama coming to terms with the situation and Duryodhan’s life inching to death will go to Pandvas’s camp and kill Pandavas’s sons (Draupadi’s Upapandavas).