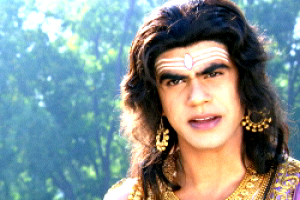 WHAT’S INSIDE:
Duryodhan dies with relief after hearing Pandavas’s death from Ashwatthama
Ashwatthama invokes Brahmastra; Arjun made to invoke Brahmastra but withdraws
Krishna to be the savior for Uttara’s unborn baby (foetus), son Parikshit
READ ON…………….

Pandavas comes to the camp and finds Draupadi about to falling down and becoming unconscious. Arjun and other Pandavas then sees and learns the horrific death of Upapandavas. Nakul and Sahadev tries to console Draupadi. Ashwathama at his end goes to meet Duryodhan. He asks Duryodhan to give rest to his broken body and heart and speaks that he has completed the work alloted to him. He informs that the Pandavas were sleeping in their camp very finely and not with much care and he killed them. Duryodhan informs Ashwatthama that now he got peace and contentment and then dies. Ashwatthama cries and shouts his name.

At the end of Pandavas, Draupadi feels immense loss and cries profusely and is consoled by Subhadra. She wants to die and asks her sons to give fire to her body for the cremation. Pandavas speaks about their son’s promise to not leave her and suggests they cannot go and cries. She speaks of losing her brother, sons (Abhimanyu and 5 sons – Upapandavas). Subhadra speaks that Uttara is pregnant and will give her grandson. Bheem speaks of leaving Ashwatthama and asks why he hasn’t killed him and laments on it. Arjun speaks of killing all the Kauravas because of their Dharm and by leaving some Adharmi they are facing their son’s death and vows to kill the remaining Adharmi’s including Ashwatthama before litting the fire to the pyre of their son’s body.

Ashwatthama before litting the pyre of Duryodhan speaks that he should be content since Pandavas are killed and wishes that he will get paradise until the end of the world. This fire has the spark of their friendship and his anger for Pandavas. As Ashwatthama is about to ignite the pyre of Duryodhan he is stopped with Arjun’s arrow. All pandavas approaches him and confronts him directly. After seeing them, he becomes shocked on seeing them. Arjun speaks that Duryodhan was their brother and he will not allow a sinful person Ashwatthama to lit fire to the pyre. Ashwatthama speaks of killing them last night and Yudhishtir informs him that he is a fool and have killed their sons and believes that he will not get salvation. After hearing it, Ashwatthama feels shocked for a moment and then laughs and speaks that all sons are dead and suggests that they are now without kids. He suggests that it is much better than their death and he goes on to speak to Duryodhan’s dead body that Pandavas got more severe punishment that he wanted and now they have the suffering of the hell though alive. Ashwatthama speaks of seeing his father dead in front of his eyes and shouts that he has killed all sons of Pandavas. He has made them helpless and his friend Duryodhan was victorious at the end.

Bheem comes forward and holds the neck of Ashwatthama and informs him that the Dharm is alive in Uttara’s womb and vows to break all the part of his body to give him death. Bheem agrees that every part of his body will feel pain and sooner then Nakul stabs Ashwatthama with a sword. Ashwatthama speaks that he will not die and then calls Pandavas as Adharmi and suggests that he will not take their death instead will give them the experience of death. He asks what you have told Bheem that your lineage is growing in Uttara’s womb so now he will kill that unborn child. Arjun tries to stop him but Ashwatthama invokes the Brahmastra and informs his special weapon to destroy pandavas’s entire family. Arjun calls Ashwatthama as sinful and then he speaks that the future’s end they will see infront of their eyes. Ashwatthama suggests that the war was set  to get new development and now their future will be ended. Arjun wants Ashwatthama to withdraw his Brahmastra since it will destroy all the environment. He responds to not take it back and speaks that in the environment where his friend is not alive and let that environment be destructed. He goes on to say that his Brahmastra will go to kill Uttara’s child in her womb. Bheem wants Arjun to invoke his Brahmastra and he replies that if invokes then there will be a big destruction and impact. Sahadev speaks that if the sinful wins then in the future there will be more sinful people. All Pandavas and even Ashwatthama instigate and suggest Arjun to invoke his Brahmastra.

Arjun invokes his Brahmastra and speaks that his Brahmastra will destroy the Brahmastra of Ashwatthama before reaching the earth. Thereafter, Arjun invokes his Brahmastra and there are two Brahmastra being invoked. Krishna comes there and asks Arjun what wrong he did since in the universe if two Brahmastra gets collided then their impact will destroy the entire earth. Krishna speaks that nobody has the power to stop the destruction causing by that impact and the new prosperous development that they were looking for will now be completely destroyed. Arjun apologies to Krishna and then withdraws his Brahmastra [since he knows how to withdraw back]. Krishna orders Ashwatthama to withdraw his Brahmastra and he replies that he won’t do it since he wanted to kill Pandavas’s grandson (Uttara’s child). Arjun informs Krishna that Ashwatthama doesn’t have the learning to withdraw Brahmastra . Ashwatthama then boldly speaks that nobody in Pandavas and even Krishna have the strength to stop his brahmastra. Pandavas and Krishna look the construction of Brahmastra in the universe and Bheem speaks even after winning the war they will be defeated and Uttara’s child will be dead. Krishna contemplates on using his divine power while Ashwatthama carries a shrewd and sinful smile on his face. Krishna and Pandavas anxioulsy look at the Brahmastra getting created and on its way to the earth to attack Uttara. It is then seen that the Brahmastra comes  to the ground at an alarming pace and goes straight to hit Uttara’s womb while Draupadi was just looking at it as a mere spectator. 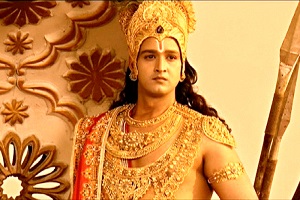 Krishna will intervene after Brahmastra hits Uttara’s womb and revive the still unborn baby to whom he will give the name Parikshit. Thus, Pandavas’s lineage will survive who will go on to be the King of Hastinapur. It has to be seen what punishment in the form of repentance will be given to Ashwatthama for invoking the Brahmastra after killing of Pandavas’s son (Upapandavas) which could have serious repercussions for Uttara and her unborn child, environment and mankind.