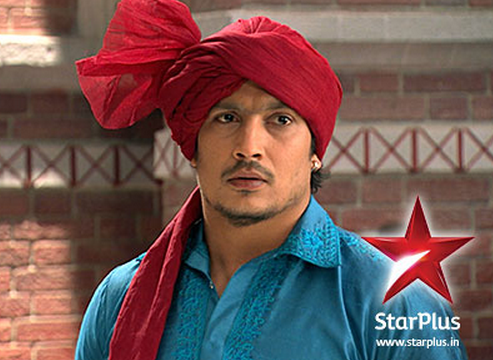 Veera has been tensed all the while, as Nihaal told her that he is leaving the next day. Veera talks to Baldev and they plan to unite Ranvi and Nihaal in the Independence day celebrations, but they fail as Ranvi is still annoyed with Nihaal. Nihaal packs his bag to leave for Poland, seeing Ranvi’s anger in his eyes. Veera tells Baldev that she will risk her life to explain Ranvi how Nihaal was innocent and their dad’s death was accidental. Nihaal did not hit Sampooran intentionally. Baldev is tensed and supports her. Baldev calls Ranvi to make him busy on the tractor. Veera comes infront of the tractor and is about to get hit by Ranvi. Baldev saves her in the nick of the time while Ranvi shouts Veera………….. unable to control the tractor on the last minute and can’t stop it.

Veera is safe and Ranvi apologizes to her for being so careless while driving, but says his attention was not on the road and he did not see her. Veera explains the same to him about Nihaal, how he saw a girl on the road and was focusing to save her as she came infront of his car, and then turned the car which accidentally hit Sampooran. She tells Ranvi to think about Nihaal. Ranvi says he would have not forgiven himself all the life if anything happened to her by his mistake, he would have punished himself. Veera tells him that Nihaal is doing the same, he is punishing himself all these years and not living a happy life, as he is burdened by Sampooran’s death. Nihaal has done so much for their family and the Pind, being innocent and selfless man. Ranvi understands Veera’s point.

Veera asks Ranvi to forgive Nihaal as he has done a lot for them, if there was anyone else, he would have not come to take their forgiveness, but Nihaal did and took care of them, but Ranvi has misunderstood him. Ranvi feels ashamed as he did not understand Nihaal before and goes to stay some time alone and think about this. Veera and Baldev go to see off Nihaal. Nihaal gets ready to leave and keeps his bags in the taxi. He sits in the taxi to leave for airport. Ranvi comes infront of the taxi and asks the driver to stop. Nihaal is shocked seeing him. Veera and Baldev happily look on as Ranvi apologizes to Nihaal and hugs them with intensity which he has suppressed all these years. Nihaal is very happy that Ranvi has forgiven him and accepted back in his life. Nihaal decides to stay back in Pind, on Ranvi and Veera’s insistence.

Happy days are back in their lives, but a problem comes knocking the doors for Ranvi, as he comes to know that the music director has cheated him, and the songs he recorded for him, the album which was releasing on his name, is now releasing on someone else’s name. His famous track Bekhudi Bebasi bepanaah………… gets released and Ranvi gets no credit for it. Everyone is shocked knowing this cheat. Ranvi is dejected and Gunjan supports him. Ranvi and Veera decide to teach the music director and his company a good lesson. With Nihaal back in Ratan’s life, we can predict a lot of eyelocks and silent romance. LOL!! Keep reading.