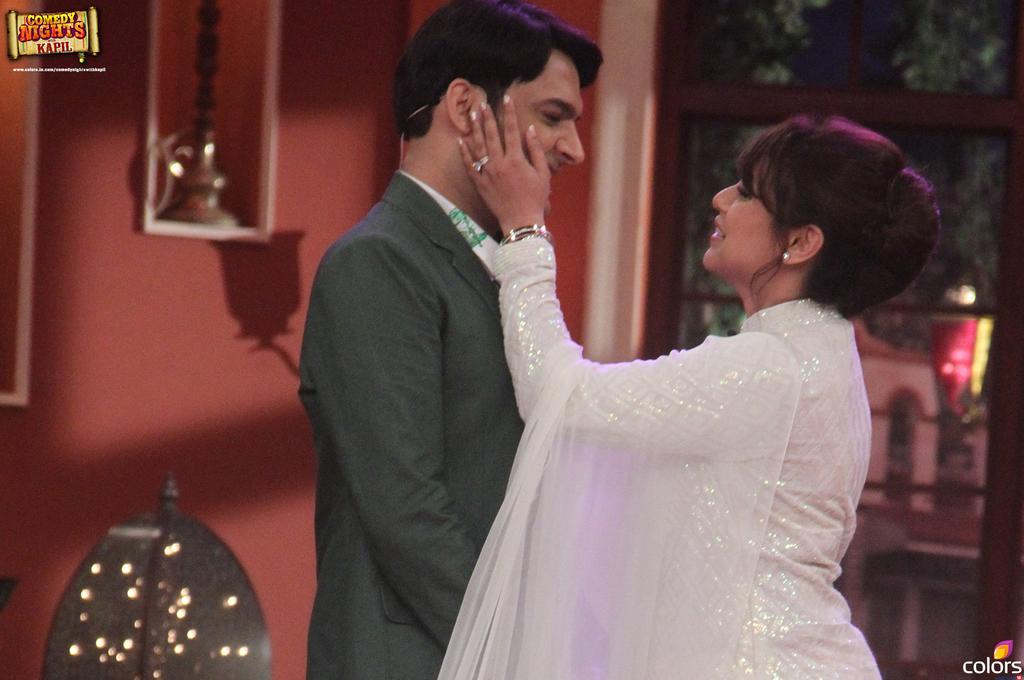 Guest on the show: Actress and Superstar – Rani Mukerji coming on Comedy Nights for the promotion of her upcoming movie – Mardaani.

Rani comes on stage on her upcoming movie Mardaani movie background music and Kapil asks her whether he can come close to her a bit and speak. Rani asks how much close ? He replies with singing paas Aajaye and then informs Siddhu on watching Rani’s movie Mardaani trailer and she is seen beating goons and bad people with much power and strength. Kapil asks her whether she is in her character and she replies to be in character for his show. Rani pampers him a bit on his cheeks and Kapil asks his team whether it is recorded funnily.

Kapil wants to ask a personal question after seeing her character in the movie Mardaani that if somebody teases her then what’s her reaction. He is asking it so he will adapt himself in asking questions to her on the show. Rani then replies with a quote (Mardaani’s movie anthem lyrics – Aaj se Ab se Aan Meri Mein.. Tumko Na Choona Doongi Jaan Ko Chahe Channi Kar Doon.. Maan Ko Na Choone Dungi… Choo kar Dekho Dil Mera Dil Mein Apna Bhar Loongi Chedh kar Dekho Mujhko Mein Tumko Nahi Chhodoongi.. Siddhu feels much impressed with Rani and then Rani continues with her couplet more – Jis Duniya Mein Behna Rishte Nahin Gali Hain..Us Duniya se Maryada Se Saare Rishta Torungi Nazar Badal kar Dekho To Main Nazar Nahi Lagni Doongi Par Chedh kar Dekho Mujhko Mein Tumko Nahin Chorungi. Mrs. Sharma (Manju) comes on stage and wants tips from Rani to impress Bittu and Rani then wants Manju to go and kiss him. Bittu straightforwardly rejects and not to kiss Manju by saying that she just ate Pudina ki Chatni invoking a laughter. Kapil and everyone becomes awe of Rani and he informs her that she came on the show for the first time and then opens the floor to the audience.

One man from the audience speaks of seeing Rani in many romantic movies and wants her to teach romance to Kapil since we only see him doing comedy. Kapil speaks of doing romance but not in front of people and smiles. Kapil then wants to sing a song for Rani from her movie Hum Tum and then sings – Saanson Ko Saanson Ko Dhalno Do Zara..Dheeme Se Dhadkan to Badne Zara.. Lamho ki Guzaarish Hain….. Hum Tum… Sooner then, Daadi comes on a bang while wearing a American cowboy hat/Director’s hat and is seen with the scene’s action board. She speaks that Cut Le.. and calls director’s language and Bittu calls her hat worth 10 INR. Daadi scolds bittu and then goes to hold Rani’s hand and pampers her. Daadi speaks about the co-incidence that today morning she became a director and an actress came to her now seeking work. Bittu informs that Rani is a big actress so why she will ask for work from her and then Daadi wants to a swapping in roles with grim look. She then requests Rani for work and speaks of having three mind blowing proposals and wants Rani to sign for those films and refers Rani as her sister. Daadi suggests that with those movies they can live their rest of their life counting money. Daadi offers her shagun to Pappi to Rani by trying to kiss on Rani’s hands and also showers her blessings. Rani asks Daadi whether she has a story, and Daadi informs of having a story and just needs a heroine to say Yes. 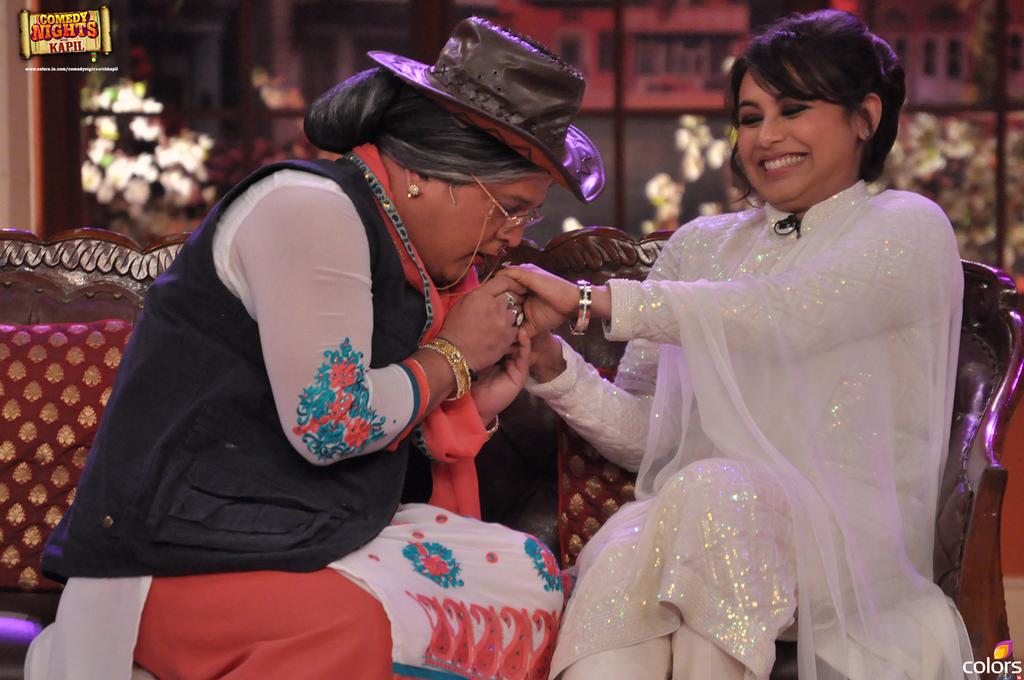 Pankhudi shouts from the top YES… and then comes on stage wearing black shades and dances on Rani’s song Dreamum Wakeuppam from the movie Aiyyaa. Pankhudi greets Rani and calls herself as the heroine of Dolly’s  (Daadi) movie. Daadi then goes on enjoy with Pankhudi on that note and Rani wants to see the talent of Pankhudi and suggests to see belly dancing. Pankhudi accepts the challenge while Bittu makes a taunt that she has the belly bottom. Pankudi then dances on Aga Bai..Halla Bachaye Re song (from Aiyyaa movie). Daadi also dances with Pankhudi and provides good support. Daadi and Pankhudi will be seen on their never ending fights with kapil trying to mediate/instigate according to his moods and situation. Kapil speaks that Rani’s movie Mardaani have a societal and good concept and thanks her in doing so and informs the audience that the movie is releasing on 22nd August and urges them to go and watch with families, and  also hope that this movie will be liked by audience more than her earlier movies. Kapil signs off by asking the people to watch his show Comedy Nights every Sat and Sun on Colors @ 10 PM. The show ends on a happy note with the song whose lyrics Rani spelled out earlier in the show. 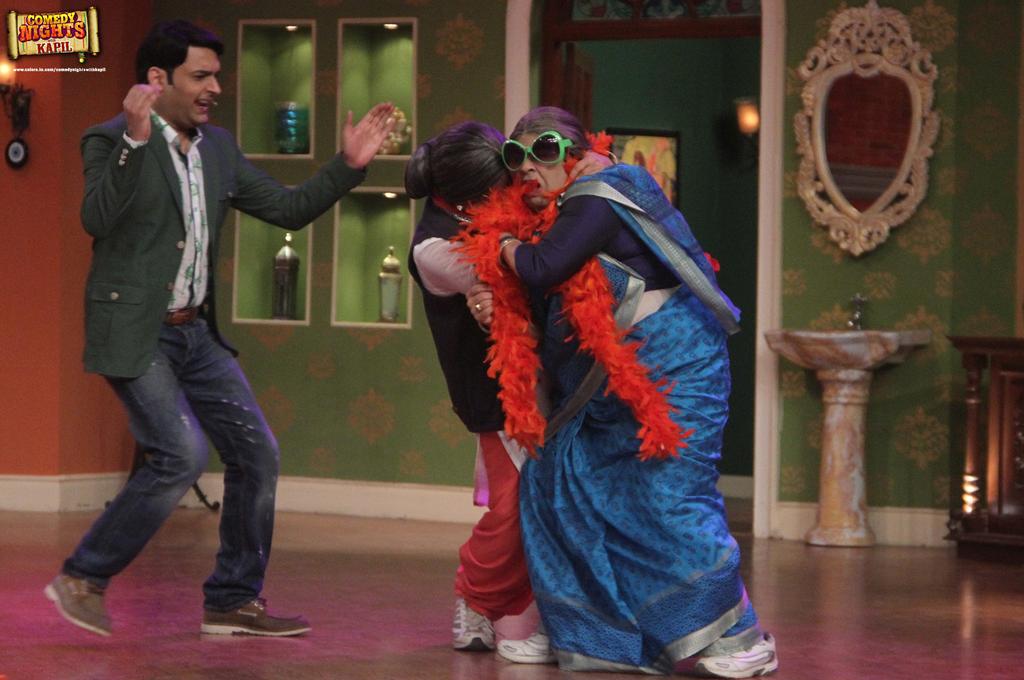