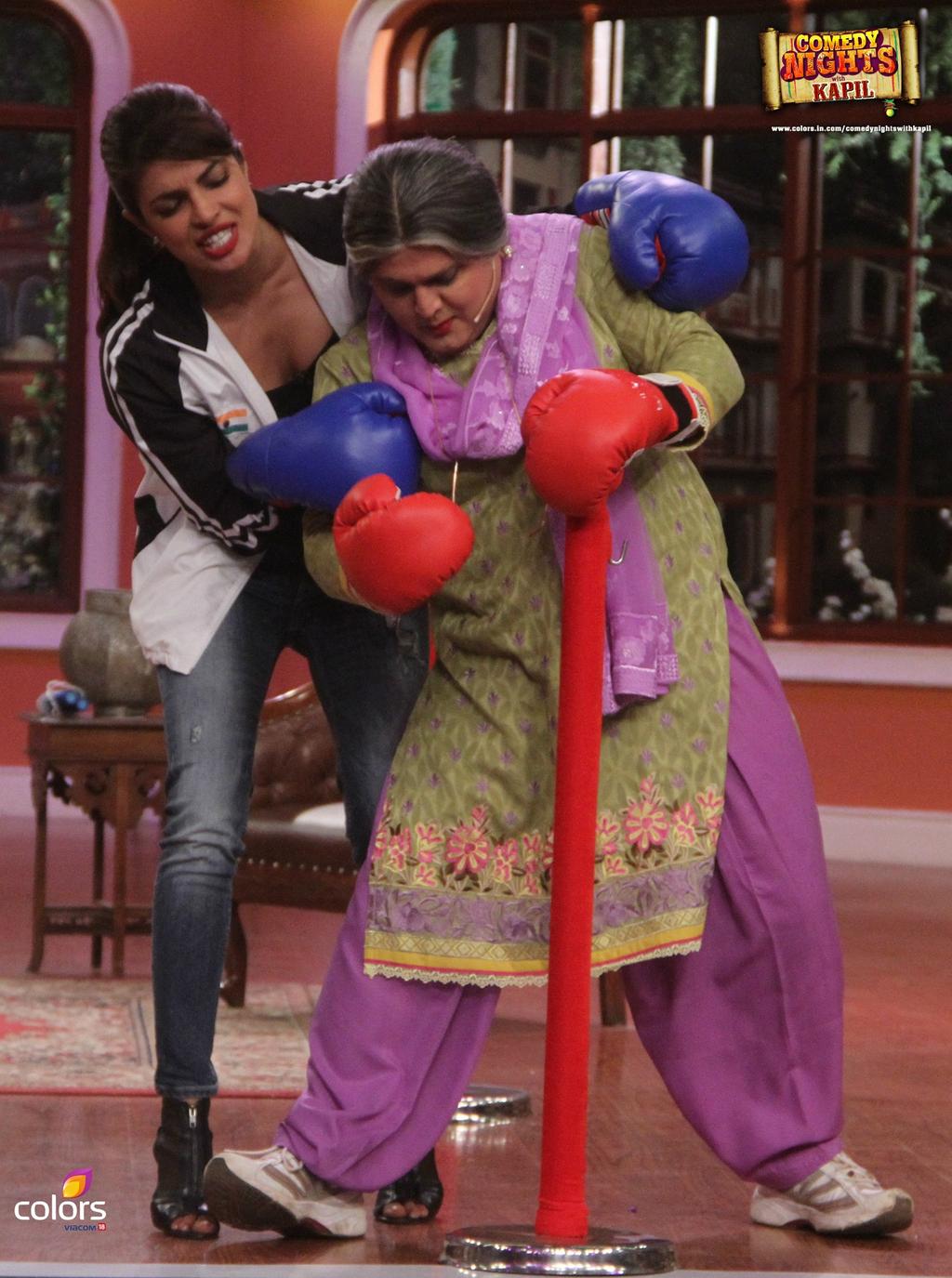 Guest on the show: Actress, Superstar, Singer – Priyanka Chopra and Omung Kumar – Director, coming on Comedy Nights for the promotion of their upcoming movie – Mary Kom.

Kapil welcomes all and greets all independence day and speaks to Siddhu that a great poet has said – Khudi ko Kar Buland Itna Ke Har Taqdeer se Pehla. Khuda Bande Se Khud Pooche Bata Teri Raza Kya Hai (Quote/couplet by Allama Iqbal). Kapil speaks that it is true since courage and strong plans and beliefs will reach you great heights in life which not only makes their life a living example but also the movies that are made on those lives.

Kapil welcomes actress and superstar Priyanka Chopra by referring to her as the very beautiful, talented and his secret girlfriend. Priyanka comes on the stage on Dil Yeh Ziddi Hai song (from her movie Mary Kom) and Kapil shares a big hug with her. Priyanka gets applause from the audience. Kapil speaks that everyone gets surprising energy whenever she comes. He speaks that Priyanka always does different things and work and this time has something different as well by working in a movie made on the life of Mary Kom. He asks whether she trained for boxing. Priyanka responds that she trained along with Mary’s boxing coaches for 6 months in two schedules of 3 months each and also stayed and live with Mary in Manipur. She cites that it was fun to meet Mary and her family. Kapil speaks that it feels very appropriate to salute and suggests that you (referring to Mary) take care of your family and home and also win medals for your country. He then salutes Mary Kom on her hardwork and achievements. Priyanka speaks of coming on the show many times and want to return the favor and then sings a song which is dedicated to Kapil. Kapil becomes elated on hearing it. Priyanka sings the song – Tere Mein Balaye Loon… Tujhe Mein Duyawein Doon..Tujhko Mein Sapnon Ke Saaye Doon.. and then she sings the same song in the way of a mother who sings for her child. She the sings – Saare Raat Pehra Karein.. Kehdu Chaand Taare Se.. Chaoro.. Chaoro (Lori) while looking and smiling at Kapil making him smile and blush as well. Kapil becomes ecstatic and she calls him my baby with love.

Sooner then comes Mrs. Bittu Sharma (Manju) and greets Priyanka. Manju asks Priyanka when did she came since she didn’t saw her earlier. Bittu speaks that Priyanka came on a helicopter and not by walking and then Manju counters it with a taunt that Bittu’s home doesn’t have a parking space to park Luna then how come you can park a helicopter making Bittu quiet and bringing laughter. Manju asks Priyanka on what is missing in her ? Priyanka replies that she is a complete package (beautiful, sensible) and showers support and then Manju asks priyanka whether she can become Miss World like her. Priyanka replies yes and Bittu and others laugh on Manju’s words and then Bittu wants his wife Manju to go and act in the Ram-Leela play in a side role in the neighborhood instead. 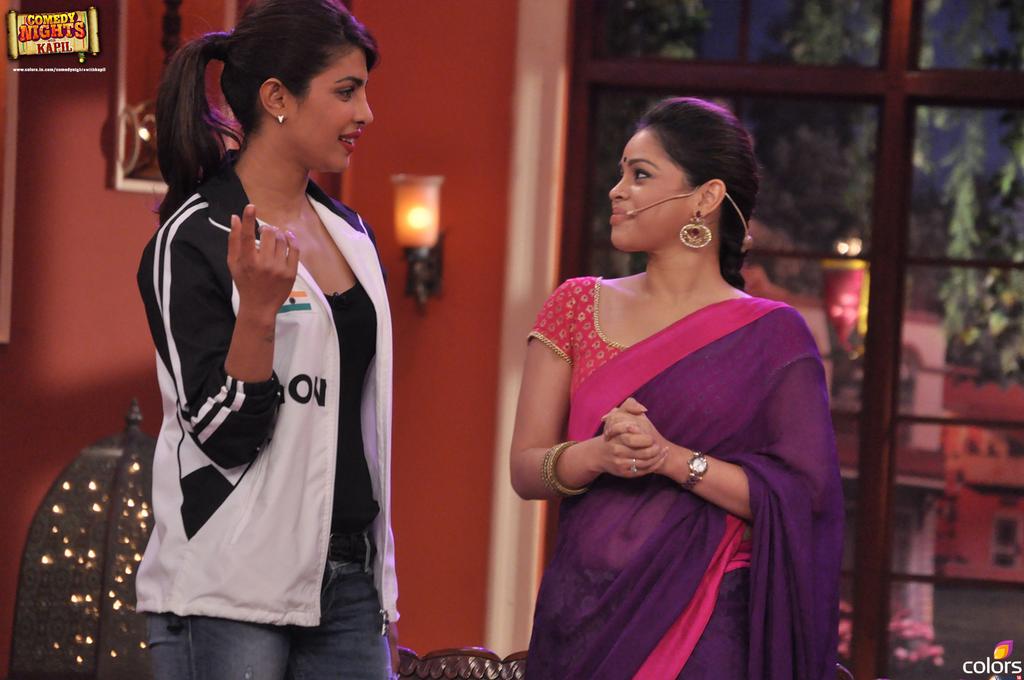 Kapil opens the floor to the audience and wants them to ask question for Priyanka. A man from the audience speaks that Priyanka’s fitness in Mary kom is fantastic which is not found in common women and then asks her whether it is a special effect in movies or by herself. She then wants the audience man to come on stage and do push-ups with her. Sooner then, he comes along with another man from the audience on stage and participates in push-up challenge with priyanka. They start doing it while Kapil counts the push-ups and at the count of 25 Priyanka emerged as the clear cut winner while the men seems to be getting tired and loosing energy by then. After 25 push-ups, priyanka is still refresh and full of energy and Siddhu and audience give Priyanka a standing ovation to compliment her dedication in fitness and hard work. Then, Priyanka dances with the audience men on their request on the Desi girl song and doing some Thumkas. Kapil thanks both audience man.

The director of the biopic movie ‘Mary Kom’ – Omung Kumar is welcomed by Kapil on stage and he goes to sit beside Priyanka. Soon after, Gutthi and Palak comes on the stage and Palak wants to speak something important to Omung and then informs him about her and Didi (Gutthi’s) wish that he directs a biopic movie for them. Palak then goes to explain the meaning of biopic and Bittu informs her that Omung has himself made a biopic on Mary kom and wonders how she can tell him its definition. She speaks of reading the definition and coming there and Gutthi suggests maybe Omung forgot its meaning after making the movie. Omung asks them what do they want, a biopic on their life ? Priyanka also asks them on whom the biopic should be made. Gutthi suggests the biopic to be made on C.T Usha (humorously suggesting instead of P.T Usha), and informs Bittu and Priyanka that this is because when people watches them in that movie then they will create sounds (Seeti in hindi) and they will not do P.T (physical training) there bringing laughter. Omung suggests that P.T Usha is only one so movie can’t be made for both of them (Palak-Gutthi) and then Gutthi replies that she is C. and Palak is T, and Kapil will do the role of Usha with ease. Bittu wants them to take their mother for the role of Usha. Gutti is also seen in some engaging conversation with Priyanka. Later, Palak and Gutthi leaves from there. 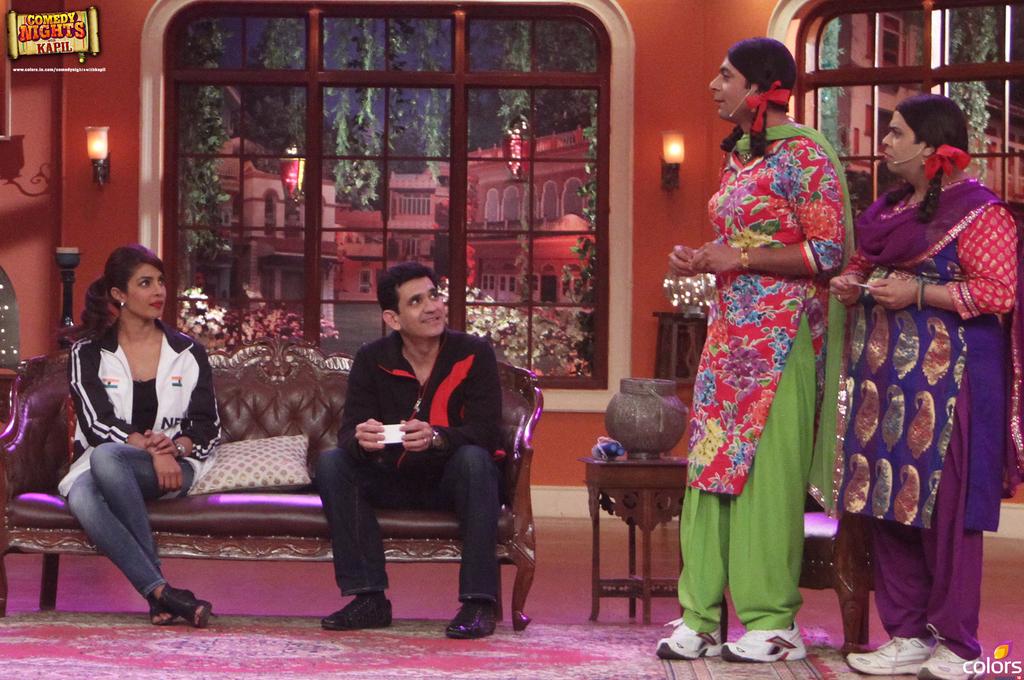 Daadi comes on stage and greets Priyanka and then wants her to give Shagun Ki Pappi to goat (Bakri in Hindi) in Bittu’s home and thinks that if she does so then the goat might start giving milk. Priyanka agrees and goes to kiss the goat and then blushes. Bittu aka kapil then wishes God why he is not made a goat since he would have got a kiss from Priyanka as well bringing laughter. Daadi goes on to compete with Priyanka in a boxing match with Priyanka leveraging the upper hand on her. It would be interesting to see how Daadi is defeated. Kapil signs off by saying the people to keep smiling and watching his show on Colors. The show ends on a happy note with priyanka greeting Siddhu and others while the song Dil Yeh Ziddi hai plays in background.