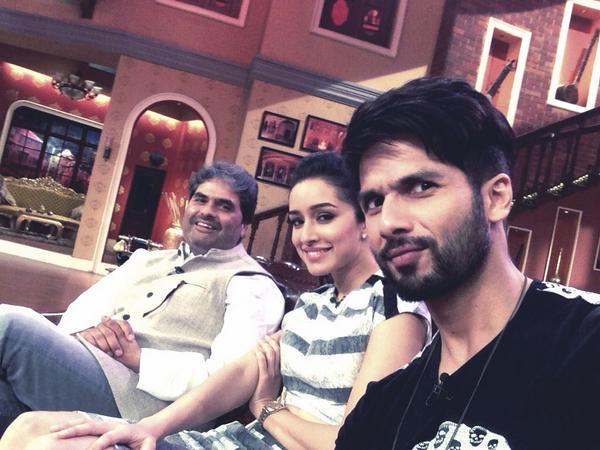 Kapil starts the show dressed in party wear and speaks of being present in Goa and also like a bachelor while holding a guitar in his hand and makes a remark on leaving his family behind and humorously calls them poor people. He got a job there to run a restaurant there and he speaks of enjoying a good time with a foreigner lady (firangi in hindi) there on the beach and goes on to say that if Julia was there then they would have got Peter and then Raju comes there dressed as a waiter and informs Bittu aka party guy on having foods – Gujrati, Thai, Italian and sea food but in the nearby restaurant bringing laughter. Raju speaks Bittu to not worry and suggests that when he gets order he will run to bring the food from other restaurant and charge 2 INR more from their customer. After hearing it, Bittu makes a taunt on Raju’s thinking by sharing a dialogue that Raju kind of people even if they get a Genie for a day he will just say to Genie – Paaji, its very hot here, Can you just give me one cold drink please ? bringing laughter. Bittu shuns him away and Raju goes away a bit.

Sooner, a foreigner lady comes there to rest on the beach and Bittu comes to her and tries to communicate with her only in sign language via his face and she didn’t react though she saw him. Bittu speaks that she doesn’t know english well and instead wants Raju to speak his words. Raju then asks her whether she needs a massage and she agrees for it very happily. Bittu steps in there and wants Raju to bring oil for his sister (Didi) and he instead wants to do her massage. On that note, Raju speaks of not letting Bittu run his family after destroying his one referring to taking away the girl from him. Soon, Raju and Bittu fights on that matter making the girl annoyed and she leaves with anger.

Kapil comes as himself and welcomes all and compliments Siddhu who was wearing a velvet suit and thinks that he met a beautiful girl outside. Siddu speaks of his attraction and then welcomes Shraddha Kapoor by referring to her as the most beautiful and speaks more on her beauty. Shraddha comes on stage and greets Kapil and then sings the song – Are Aao Na.. Ke Thak Gayi..Sojaoo.  song very effortlessly with much ease. Kapil praises her a lot on singing and then gives her a WIFI kiss just by stretching his hand from a distance. Shraddha asks Kapil that he has reached a high level and he still continues to flirt with girl and then asks him whether he doesn’t feel shame ? Kapil becomes nervous initially and then speaks that his heart is saying that he flirts with her a lot and walks towards her while opening up his arms. He then speaks of teasing her with Shraddha (devotion in english). Shraddha informs him to be in control since she came with Haider who will make sure to separate Kapil and Sharma if he teases her a lot.  Kapil speaks of not being worried because of Haider and then wants her to bring Haider there. Shahid Kapoor makes an entry in his character Haider [for his upcoming movie Haider] while holding a skull replica. Shahid comes on the stage on the song Saare Zindagi. and greets Shraddha and Kapil. Kapil and audience greets Shahid and then comes Vishal Bhardawaj the director of the movie Haider and Kapil refers to him as his favorite. Kapil greets Vishal and speaks of being a fan of him since he has given so many big hits. Kapil then speaks of his believe that Vishal will come on his show and then asks him whether he thought that he will come on his show ? [This question usually Kapil asks to his guests]. Vishal replies that actually he wanted to make the movie Haider late since he wanted to take a break from making movies but then thought that by then Kapil’s show might have ended so decided to make his movie now bringing laughter to Kapil and all.

Kapil speaks that Vishal’s movies are inspired by William Shakespeare and to cite some examples like Maqbool is inspired by Macbeth, Omkara was inspired by Othello, and now Haider is inspired and adapted from Shakespeare’s Hamlet and now what is left is Romeo and Juliet. Shahid steps in and asks Kapil what does he want to make and then wants to do the character of Romeo and Juliet along with Kapil bringing laughter. Sooner then, Vishal speaks of enacting a scene there with Romeo waiting for Juliet at the balcony and Juliet comes to him with Kadi-Chawal (Indian curry with rice). Kapil makes a funny comment that for Shahid the curry goes to Kashmir and for him Kadi Chawal. Kapil then goes on to enact the role of Romeo and runs to the balcony and waits there for Juliet while Shraddha takes the role of Juliet and carries a pot with Kadi-Chawal. Romeo (aka Bittu) waits anxiously for Juliet and contemplates whether Juliet’s scooter is punctured because she didn’t came to see him until then and then Shraddha as Juliet calls him. Romeo makes a taunt at her and suggests why she is begging even after wearing good clothes. She informs him of bringing Kadi-Chawal for him and Romeo then spreads his eyes properly to identity Juliet and calls her name and asks what she is doing there? He informs her on not able to come down since his mother has put the lock and went away. He wants her to remove the Pakodas from the Kadi since the Kadi will leak by itself bringing laughter. Romeo then asks who has prepared this dish ? Juliet replies that she prepared it first in a sweet manner and then he asks about the recipe which makes her quiet. She then replies on having the readymade Pakodas and then wants her to look for a readymade Romeo in the same way. Romeo wants a Juliet who can make Kadi-Pakodas on her own bringing laughter. Kapil speaks that he is happy since the Pakodas and Kadi are made though he doesn’t know whether the movie will be re-made on Romeo and Juliet and also speaks of doing a 2 1/2 minute short movie and thanks Vishal.

Sooner then, Gutthi comes there with much oomph and persona and gets lot of cheers from the crowd. She then tells them to shut-up in her own style and then greets Shahid and Shraddha. Bittu asks her why she didn’t greet Vishal sir ? Gutthi replies very candidly that Vishal has given her a deceit and she then sheds more light that the Beedi Chaliye Le song was earlier supposed to be picturized on her and when she went to buy Beedi for it and when she came back saw Bipasha Basu took her place and the song was shot with her bringing laughter. Kapil speaks that she is lying since there can’t be any competition between Bipasha and her. Gutthi then replies of speaking correctly that Bipasha cannot match her and there is no competition between them since Bipasha is hot from her Jigar but she is hot from everywhere and can ignite fire from all directions bringing another round of laughter. Gutthi then speaks of composing a song which also has musical instruments in them. She then sings while creating different sounds as they are coming from different musical instruments. She also moves her hands to dance a bit. 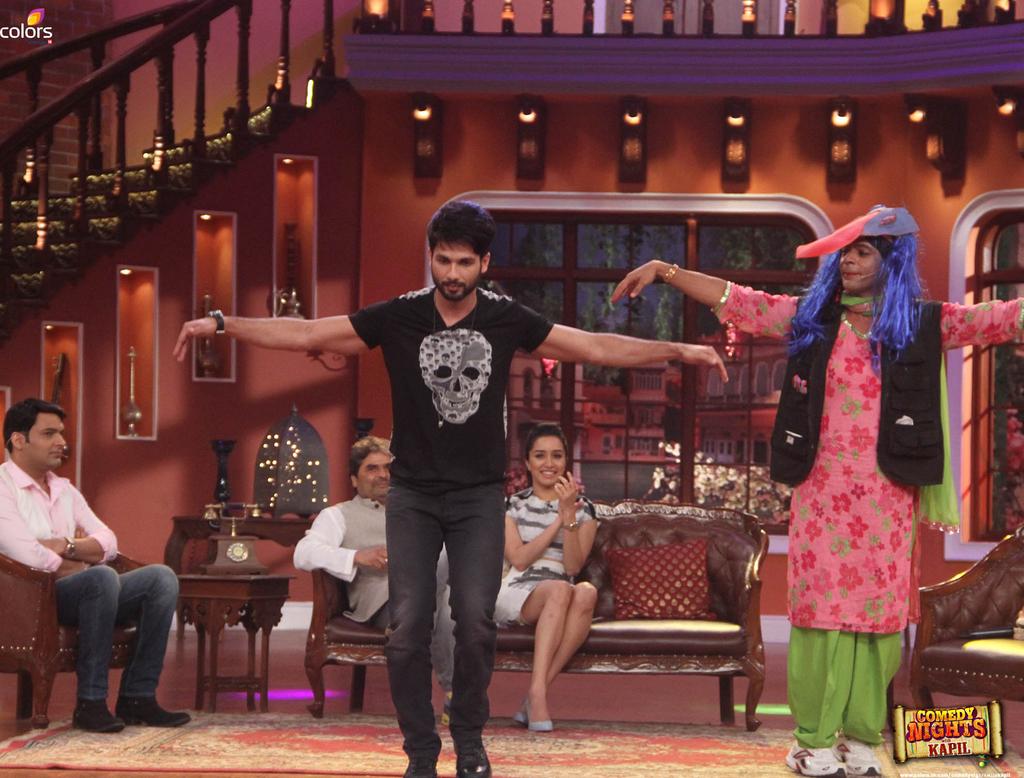 Gutthi and Shahid will have a gala time as they do groove on the Bismil song together, the song from Shahid’s movie is penned with lyrics expressing love and betrayal and exhibits much anger. Stay tuned to Comedy Nights this weekend on Colors @ 10 PM.

* Haider is an adaptation of William Shakespeare’s trajedy novel Hamlet. It is the third movie in the director’s Vishal Bhardwaj Shakespeare’s trilogy, Maqbool (Macbeth), Omkara (Othello) and Haider (Hamlet). Shahid plays the titular role of Haider, and the movie also has Tabu who essays the role of his mother who marries her brother-in law (played by Kay Kay Menon) after the disappearance of her husband. Shraddha plays the role of a journalist Arshia who is Haider’s love interest.