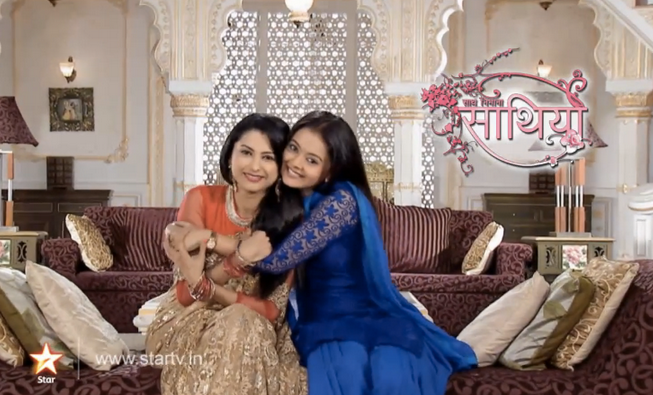 Paridhi has cheated Jigar and married him. She has got the police involved by lodging a complaint that Jigar married her and is leaving her to go abroad. While Jigar was leaving, he is stopped by the police and asked not to go outside India, as his wife had lodged the complaint. Jigar, Ahem and Gopi to see its Paridhi behind all this. They come home and break this news to everyone. Paridhi gets more bolder than Kokila and argues with her to get her rights on Modi Bhavan and Jigar’s life, as she is his wife now. Kokila orders her to leave their house, and Paridhi says she has full right now and no one can kick her out now. She talks to Kokila with disrespect irking everyone. Kokila raises her hand to slap her. Paridhi stuns everyone holding Kokila’s hand.

She tells them that they have to accept her anyhow. Jigar is angry on Paridhi as she has taken advantage of his goodness and cheated him. Paridhi tells him that she loves him, to which Jigar replies he hates her. She says she is sure to turn his hatred into love and thinks its easy to take Rashi’s place. Paridhi can’t take Rashi’s place in his heart, and not even in viewers’ heart, as Rashi was very adorable and Paridhi has no charm in her which she boasts about. Paridhi gets hungry and orders a pizza. The kids are angry as she married Jigar forcefully and go to trouble her. They eat the pizza she ordered and she stays hungry. She goes to slap the kids, and Gopi holds her hand stopping her from hurting them. Gopi asks her to stay in her limits.

Paridhi tells her that the kids are trying to make her leave the house. Gopi says if she has understood it, why does she not go herself. Gopi asks her to leave the house. Paridhi says she won’t leave and is adamant. Urmila is worried for Tolu Molu and wants to bring them her home, as Paridhi won’t love them. Urmila is mistaken and thinks Kokila made Jigar marry Paridhi. Will Kokila teach Paridhi a lesson in her strict way? Will Paridhi understand that she can’t win Jigar’s love forcefully? Keep reading.