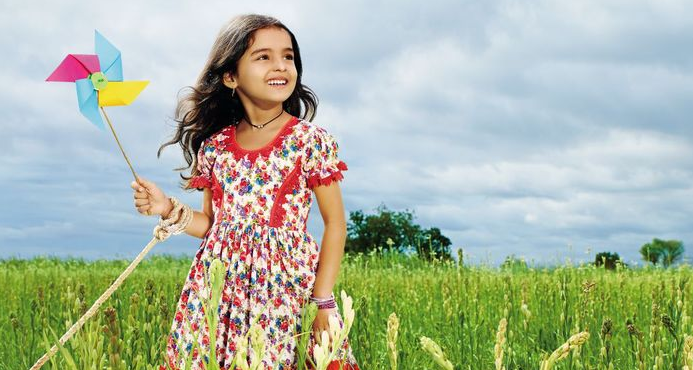 Innocence droplets just like honey!! Spandana Chaturvedi, in her role of 7 year old Chakor is creating waves. The girl was earlier seen as Aarvi, Ketki and Dilip’s daughter in Sanskaar on the same channel Colors. She has a small role in it, but her talent was noticed. She has also done the role of child Madhubala (Rishbala’s daughter) and she has finally hit the jackpot with her lead role in Udaan. The show revolved around Chakor’s life, struggles, upbringing, freedom and her conflicts with Kamal Narayan. Spandana is just magical and superb. Her on screen presence in the poverty struck role has been so powerful to create a impact in just few days of its air. The girl is immensely talented and when the show starts, we wish it does not end and it goes on and on………….

The story is gripping good, as Kamal Narayan (Bhaiya ji)now knows Chakor is indebted to him, and decides to make her away from her parents. He is much angry as she made his Rs 2000 crores loss and thinks to not spare her. He lost his NRI investors and also his reputation which he has build over the years, just because of Chakor’s non stop poverty story. Chakor is sent a red dress as a welcome gift in her new slavery life. Kasturi pleads Lakhan to spare Chakor, but he does not. He orders them to bring Chakor to haveli next morning. Kasturi’s pain is heartbreaking and it very touchy. Bhuvan acts helpless and under confident. Kasturi goes ahead to burn that dress and sees Chakor wearing it. Bhuvan asks her not to burn the dress, and think of the result if Bhaiya ji knows her step. Kasturi and Bhuvan shed tears as they are unable to save Chakor. Bhuvan takes her to the haveli and finally leaves her there, as he thinks her fate lies in the haveli and no one can get her out of there. Cruelty symbol Tejaswini starts troubling Chakor to make her life miserable. Chakor deals with all problems with her smartness, which gives a good answer to them.

There will be a new Rawat family who would go on to play a very important role in the upbringing of Chakor. Prabhakar Rawat who would be a close friend of Kamal Narayan will be entering soon. His son, Eshwar Rawat, an IAS officer by profession and his educated wife Abha Rawat, a teacher and NGO worker will be visiting Aazaadgunj. When in the village, Eshwar and Abha would get to know of the little girl Chakor being dragged into child labour, and they would raise their voice against this, and take Chakor with them to Lucknow. Eshwar Rawat would be very kind and caring towards Chakor. With Chakor being in safe hands and getting her deserved freedom, she will get a good upbringing from the Rawats and we hope she becomes a threat to Bhaiya ji and Tejaswini. Chakor’s words goes as: No one will be able to tie me down, I will fly high and get the moon on earth. Well, the show is going to unravel how she succeeds in this. Keep reading.