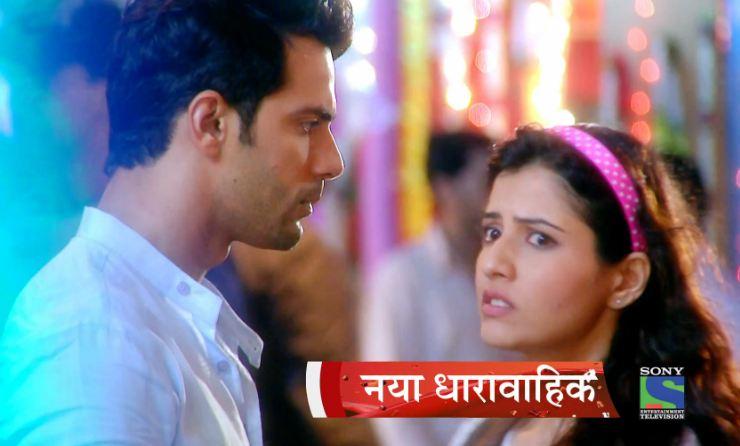 Itti Si Khushi (So Little Happiness) is the story of a young 15 year-old girl Neha who had been in coma for 12 years when she met with a fatal accident at the age of 15 years. She comes back from coma and wakes as a 26 year old woman and knows that she has missed a big chunk of her younger years and wants to reclaim that lost time by living the life to the fullest.

The environment around her is serious, objective, practical while she ought to live retaining her youthful energy and spirit and the life which has joy without thinking much about age barriers. Her spirit is the one which wants to conquer impossible dreams like that of the one which we have all have when we are young.

In the first Promo, the grown up Neha of 26 years old is playing with children and young girls and as she falls down after a brief worry becomes happy and smiles like that of a child and enjoys herself. In another promo, as she was running in a market goes on to clash with a young man Aman in her follow through and some of the things she was carrying falls on his foot. She then speaks – Sorry Uncle with nervousness and worry on her face and while going from there again looks at him and is still nervous. The young man wonders how she called him uncle. The makers of this show is Director’s Kut Productions managed by Rajan Shahi (Current shows: Yeh Rishta Kya Kehlata Hain (YRKKH) on Star Plus, Aur Pyaar Ho Gaya on Zee)

Itti Si Khushi is starting on September 29th @ 8:00 PM slot and replaces Ekk Nayi Pehchaan which is going to end on 25th September. We wish the cast of Ekk Nayi Pehchaan – Krystle, Karan and others all the best in their future work endeavors.

Info on Cast and additional note:
* Neha, a grown-up girl of 26 year old and female protagonist is played by Smriti Kalra
– Smriti was born in Delhi. She is a Television actress and had been a Radio Jockey (RJ) for Red FM.
– Debuted in the role of Simmi Sethi on Zee’s show 12/24 Karol Bagh (2009-2010)
– Portrayed the titular role of Suvreen Guggal – in Channel V’s show, Suvreen Guggal – Topper Of The Year. (2012-2013)

* Aman – the young man (shown in promo) and lead is played by actor Anuj Sachdeva
– Anuj was born in Delhi.
– He is a Television and film actor and model.
– Known for portraying the male lead role of Amrit Malhotra in Sabki Laadli Bebo on Star Plus (2009-2011), Thakur Aditya Singh in Phir Subah Hogi on Zee TV (2012), Manav Borisagar in Chhanchhan. on Sony TV (2013).
– Also worked in MTV Roadies (2005-2006) and recently acted in the movie Hawaa Hawaai.
– Anuj is trained in marital arts for 9 years and earned a brown belt in Taekwando,
– He is also a Footwear Designer and owner of Ions footwear
– Anuj’s Twitter page.