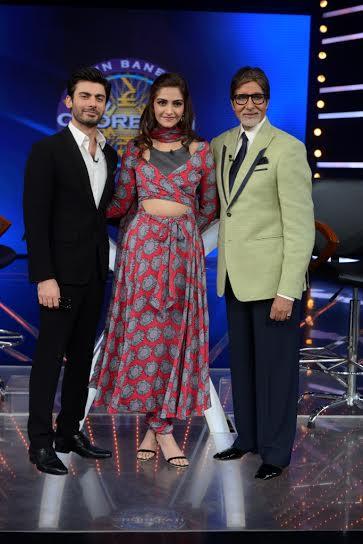 Sonam Kapoor comes on KBC stage and performs on the Abhi Toh Party Shuru Hui Hai. and Engine ki Seeti songs from her upcoming movie Khoobsurat. Fawad Khan comes close to the end of her performance. Big B comes and hugs Sonam and Fawad and greets them for coming on the show. Sonam and Fawad sits on the hot seat after the rollover contestant wins 6,40,000 INR.

Big B informs the audience that Sonam and Fawad’s movie Khoobsurat will be releasing tomorrow (19th September) and then asks them about the difference between their movie which has been remade from the original Khoobsurat directed by Hrishikesh Mukherjee. Sonam speaks that movies which were made by Hrishikesh Mukherjee are no longer made, and if there is good storyline then the story is dark and suggests that commercial and happy movies doesn’t have story. She speaks of her character name is Milli which has similarities with Hrishikesh movies. Big B informs that Fawad is from Pakistan and is very popular there and then asks him about his experience in India. Fawad speaks of having good experience and got warmth from people. He speaks of feeling like home in India. Big B asks Fawad, How does it feel to have lot of female fan following while Sonam is laughing ? Fawad replies on feeling speechless and flattered with the attention he receives.

Big B does a small quiz with Sonam and Fawad. Sonam answers first one which asks the one who is most khoobsurat ? Sonam chooses the option the one which has a good heart (Dil Wali). The second question of quiz suggests about Sonam’s personality in comparison to a vegetable. Fawad chooses the answer Mirchi which is right. The third question asks about Fawad Khan’s personality and Sonam chooses puppy which turns out to be right. Big B asks Sonam whether there is a pappi in their movie. She speaks on the goodness and soft nature of Fawad in real life.

Big B speaks of a challenge which Sonam will initiate. Sonam speaks the dialogue spoken in Mumbai [Bambaiya language] and Fawad has to repeat the same translating in Urdu since he has good command. Some part of Sonam’s dialogue was – Chal Hata Savan Ki Ghatta Khaal Khuja Batti Buja ke Sojaa.. Chal Ja Yahan se Kuch Hawa Aane De.. Fawad tries to repeat in Urdu and does it and then asks Big B what is the meaning Chaend Khuli Ki Main Khuli Ki Chaend ? Big B replies it doesn’t have any meaning bringing laughter and suggests that action directors used that dialogue to motivate the actor Big B for action scenes and in particular Satte pe Satta have that dialogue and the seven brothers used to motivate themselves. Big B then wants Fawad to sing a song since he sings well. Fawad speaks of being a big fan of Big B by his heart and he then sings the song – Dilbar mere kab tak mujhe..Aise hi tadapaoge..Main aag dil mein laga doonga woh..Ke pal mein pighal jaaoge… which is from Big B’s movie Satte Pe Satta. Big B wishes them the best for their movie Khoobsurat and they take leave from the show.