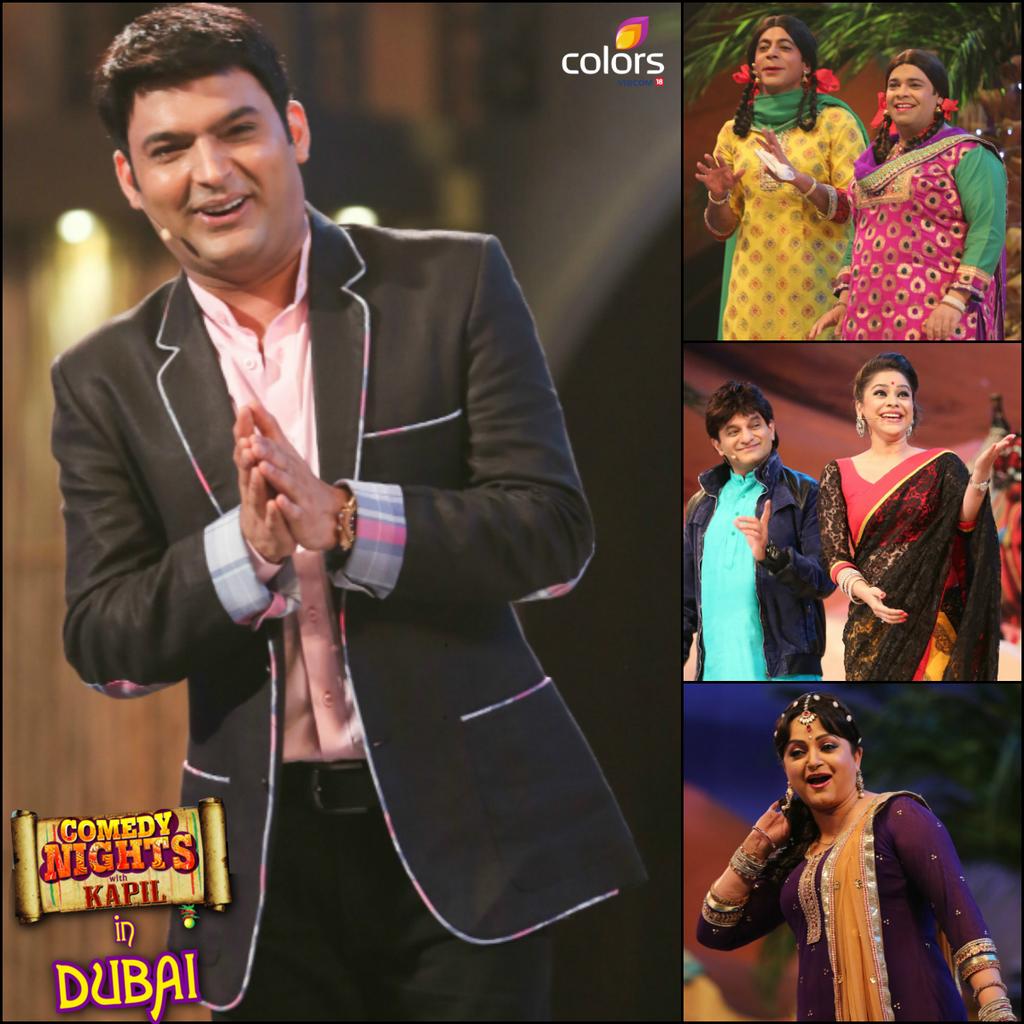 Comedy Nights With Kapil for this weekend has the setting of Dubai where it has been shot. Daadi is acting as the Rooster on a road there in Dubai. Bua and Bittu’s wife come to see Daadi there and finds her in that strange pose.

Bua thinks that Daadi will give eggs and Daadi replies by saying that she is doing Yoga and things will happen because of Yoga only [Yoga se hi Hoga in hindi]· In another scene, Roshni is seen as a tourist who asks Bittu about the address of Burj Khalifa. Bittu doesn’t know the address and also misunderstands her question and speaks that he is Burj Khalifa’s son Surj Khalifa and after boasting about it wants to drop her at that place. The tourist sits in Bittu’s sports car so as to go with him. At the same time, Mrs. Bittu Sharma comes in there and enquires her husband Bittu. Bittu tries to suggests the tourist that Mrs. Sharma is a beggar on a humorous note and suggests that he helps people.Mrs. Sharma becomes annoyed at Bittu and then the tourist girl comes out of her car. Mrs. Sharma informs that Bittu is a liar and even the car doesn’t belong to him. Bittu tries to convince that he is not a liar and also tries to speak about his uncle Burj Khalifa – another lie. The tourist girl slaps Bittu and calls him a liar and leaves. While, Bittu feels setback and even a slap, Mrs. Sharma carries a smile on her face and taunts Bittu and asks whether he felt fun ? Bittu replies with a shut-up message and leaves.

On another occasion, Bittu and Mrs. Sharma goes to see belly dancing and even Bittu tries his hand at belly dancing and wears some costumes for it. He is happily dancing with the belly dancer and soon Mrs. Sharma comes and asks the dancer to stop her dance and leave. Before going, the dancer passes a taunt at Mrs. Sharma and refers to her big lips. With that googly, Mrs. Sharma is shocked and Bittu has the final laugh. Kapil sings in the open auditorium a punjabi folkfore song – Eid Aayi Mera Yaar Ni Aaya and then Yamma Yamma song (from the movie Shaan 1981). The audience applauds Kapil’s singing performance. Kapil starts his show in the auditorium and speaks that couples – husband and wife have usually Nok Jhoks and asks the audience who are staying far from their respective countries on how they manage and live their life. Kapil finds an Arab man Fareed and suggests to him on a lighter note that he only knows fun. Kapil asks him about his family knowing Hindi and the man replied how come they know about it.

The Arab man – Dubai Sheikh was speaking in Hindi though not fluently and informs of learning Hindi because of Bollywood movies. When Kapil asks him about his favorite stars, the man replied Amitabh Bachchan, Shah Rukh, Salman and Aamir Khan. Kapil and audience applauds him and then the man informs that Kapil has overtaken the big stars. Kapil asks him about his favorite character and he replies Kapil. Kapil then asks whether he doesn’t like Bua who is just 22 years old. On that note, the Arab man replies that he is just 18 years on a lighter note and rejects Bittu’s proposal invoking laughter. Kapil thanks him and then informs of coming to Dubai first because of their love. Kapil welcomes Bipasha Basu and refers her as the bombshell, beautiful and talented one. Bipasha and Imran comes on stage on the song Sawan Aaya Hai (Itna Pyaar kisi pe, pehli baar aaya hai..) from his movie Creature 3D. Daadi comes on stage and suggests to Imran humorously that he will become a superstar only if he is intense. Imran speaks of being fine in his current style but Daadi doesn’t stop and she goes to shower her Shagun Ki Pappi (kiss) to Imran on his cheeks.

Daadi wants something in return from Imran and Bittu suggests him to return her a punch invoking some laughter. Imran decides to sing a song specially for Daadi and then sings – Tum Jo Mil Gaye Ho… To Yeh Lagta Hain. from the movie Hanste Zakhm (1973, sung by Mohd Rafi) and comes close to her. He sings with emotions and Daadi also becomes much emotional with him. Bittu dances with Bipasha and she asks what is happening with Imran and Daadi since they were sharing intense eyelocks. Daadi makes strange faces like that to fart which makes Bipasha to cover her nose and then goes on with her quirky jokes making Bipasha blush as well. Mrs. Sharma asks Bittu why has he booked a small room in the hotel ? He makes a taunt and asks whether her lips are going out of the room. She asks Bipasha for some tips on shopping in Dubai. Bipasha replies lipsticks since it is cheaper and Bittu comes in there and suggests that though for his wife it would be cheaper to buy lipsticks here but he would be paying a bigger price which is another taunt at Mrs. Sharma lips. Paresh who acts as Mrs. Sharma’s brother will also be on stage and sharing some developments with her. He will then offer the hand of friendship towards his brother-in law Bittu which he tries to do always and it is to seen whether Bittu finally gives him respect.

Soon, Gutthi and Palak comes on stage on the MashaAllah song from the movie Ek Tha Tiger. While Palak comes on a small motor replica and drives it, Gutthi is in herself and does her running part which looks like that of long distance jumping and as that of bird. Gutthi grooves on the song as well and then goes on to sing her trademark song – Aap Aaye Hain Isi Bagiya Phool Khele Hain Gulshan Gulshan.. Bittu is not impressed with Gutthi and suggests her to go and visit the city instead of singing and other things. Gutthi replies that if she steals here then her hands will be cut so she prefers to not roam around and not to steal. Palak takes the opportunity to makes some sort of taunt at her elder sister Gutthi and suggests imagine how will Gutthi dance and welcome people if her hands are cut. Palak enacts the Gutthi welcome song but with shorter hands invoking laughter and also adds the garden will be small as well.

Kapil welcomes singer Mika Singh by referring him as the superhit king and his brother. Mika Singh comes on stage on the song Shake that Booty.. Lets’s go Party Party and then goes on sing that song and Subah Hone Na De and goes around the auditorium with excitement. Stay tuned to Comedy Nights on Colors.