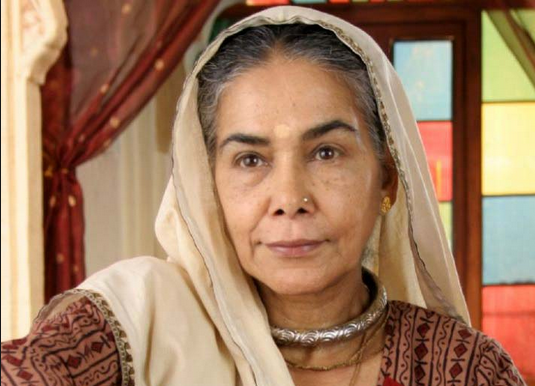 Balika Vadhu is one show which comes up with sensitive social causes. This time the makers have decided to highlight widow’s marriage. Kalyani Devi aka Dadisaa of the show has changed her thinking over time, shedding the old values and ignoring society norms. She has joined the school to complete her class 10th and is even wearing school uniform and shoes. As you all know Niranjan is a music teacher who taught music to Gehna during her young days. Once Basant wanted his young wife Gehna to marry her teacher Niranjan as he thought he is old enough for her. However Gehna refused to marry Niranjan as she truly loved Basant and accepted him as her husband amidst the age difference she shared with him. Basant dies in a road accident while trying to save his mother Dadisaa. Gehna’s life has become uncolorful and unhappy since then. She took up her husband responsibilities and work. Her son Nandu is helping her and is seen maturely taking decisions.

On Dadisaa’s birthday, Jagya takes his family to the temple where they see Niranjan singing a Bhajan. Niranjan falls from the temple stairs while cleaning it. Jagya and Shiv run to save him. Jagya bandages his wounds while Dadisaa offers him to come to their house. Niranjan hesitantly agrees. Dadisaa and family take care of him. Niranjan gets well. Jagya offers a job to him which he accepts. While studying history in the class, Dadisaa gets inspired by Raja Ram Mohan Roy’s words about Widow’s remarriage. The idea about widow’s remarriage stuck to her mind and she decides to get her daughter in law married to Niranjan. She thinks Niranjan is right for Gehna. She worries for Gehna and her children’s future. Then she talks to Jagya and Ganga about her decision and gives examples of Suguna, Anandi and Ganga. Jagya and Ganga agree with her. Dadisaa is sure that Gehna will never agree so she plans to make Gehna spend time with Niranjan. She thinks Gehna will like Niranjan and will eventually agree. Keep reading.