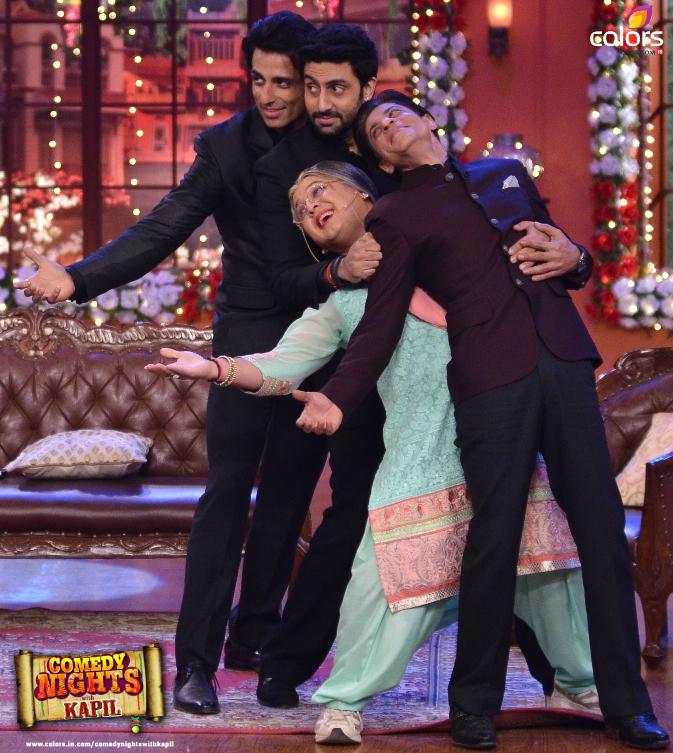 Kapil welcomes all and wishes everyone Diwali and starts the show by first welcoming Farah Khan – the director of the movie who comes on Indiawaale song. Farah pulls Kapil’s leg and informs that Happy New year movie has done the decoration of the stage there and even suggests that his suit is also supported by her movie and informs Siddhu the same about his suit. Kapil speaks that the entire Happy New Year Team is seen going for promotions and then asks her why did he kept 3 words in movie names – Om Shanti Om, Main Hoon Na, Tees Mar Khan, Happy New Year. and whether such naming is lucky for her.  She replies on just keeping it and suggests that even not thought of giving birth to triplets (three children) together [Farah gave birth to one son and 2 daughters in 2008]. Kapil asks about the gift and She replies on bringing a big gift and he is the person who has never came on his show referring to Abhishek Bachchan. Abhishek comes on stage on Nandu song and then Kapil speaks to him that Bachchan family is famous for punctuality then why did he come late on his show. Farah then goes to bring SRK on stage. SRK comes and hugs Kapil and Abhishek.

Kapil speaks that SRK doesn’t need any introduction. Kapil speaks with SRK on learning and improving his English language skills. He reminds that SRK pulled his legs when came for Chennai Express movie promotions last year and makes taunt on his english skills. Kapil speaks few dialogues in english – I am delightful, why you people laughing uneducated fellow, refers SRK as magnetic persona, to share this memorable moments with an actor par excellence like you and speaks of having  to convey SRK that he has improved on it.  Kapil, SRK and Abhishek are all seen dressed up in suits and looking elegant. Kapil then turns to be Abhishek and informs that there are 5 male actors in the movie but Deepika is seen to romance with SRK in the movie. He then suggests whether it was the demand of the script or SRK is using the power of himself being the producer. On that note, Abhishek gets laughter and asks Kapil to ask the producer itself. SRK on a lighter note speaks of girls being wooed with him for free which brings more laughter. SRK speaks that some girls likes his cheek dimples a lot. Sooner then, Deepika comes on stage while dancing on Lovely song.

Kapil welcomes Deepika Padukone who joins SRK and Abhishek and they go on to sit on the sofas. Kapil flirts with Deepika by suggesting that his suit color partially matches to her Saree color. She accepts Kapil’s matching point and is seen wearing a floral print Saree on the show. Kapil speaks that Deepika comes to his show very often and suggests that in one month, she will be on his set for a period of 10 days. Kapil fondly calls her Deepu which he had earlier referred to when she came with Arjun Kapoor last time for Finding Fanny movie promotions. Kapil will be taking all the opportunity to flirt and pamper her on the show since Deepika is his favorite actress and everything is done on lighter note.  Kapil speaks to SRK again on his english skills and suggests that his level has gone up. He speaks of decorating his stage a lot because SRK and Abhishek are there and then speaks in English – What the Hell is going on in front of my back which invokes laughter on SRK and Abhishek’s face. SRK suggests that Kapil’s english voice has that boldness and power and Kapil then replies in English – Because somtimes you never know what is they are doing in front of your back. SRK and audience erupts in laughter on that hilarious note.

Happy New Year Team participates in the Swach Bharat campaign on Comedy Nights with Indiawaale song playing in background.  Deepika on the lighter note also does sweeping on Kapil’s heart upon his request. Kapil sits down on the floor for a while while HNY teams sits on the sofa. Sooner then, Kapil speaks that Vivaan is an amazing dancer and asks him to dance. Vivaan them goes on to groove and dance with much energy on the Lovely song from Happy New year movie. He is soon joined by SRK and Deepika and other team members and they all begin to have a gala time in dancing. After the dance, SRK speaks what Vivaan’s father Naseer Uddin Shah (Naseer Bhai) is seeing on TV.  Just then, Palak makes a rocking entry on Ek Do Teen song (madhuri’ song) and dances with much fervor. She greets SRK and Deepika in suave manner and she is acting as ace legendary choreographer Saroj Khan. She first calls Seepika and Gutthi comes as Seepika  and Palak aka in get-up of Saroj Khan welcomes Seepika. She then asks SRK that he has done romantic scenes with Deepika in his movies and then wants SRK to try with Seepika. SRK agrees and speaks to Seepika with a english dialogue with a long random word – Super cally fagilistic..………… Gutthi aka Seepika looks at SRK with much seriousness and SRK informs of getting mesmerized and hynotized after seeing her for the first time and calls her as Mohini. He then makes at Seepika by calling her Hippopotamizer which brings laughter to all. SRK then goes on to speak that she has very big brown Thighs.. mean.. Hip’s don’t live and speaks of confusion and then speaks that she has lovely eyes. Seepika is confused and asks whether he spoke in english and then creates expressions of Oomph in the disguise of confusion and tries to flirt with SRK by falling over him and he needs to hold her. Seepika wants SRK to not leave her and calls him Praannaat (my Life). Seepika then leaves from there.

SRK cracks a Prank at Raju same as Sr. Bachchan:
Raju  and Rajiv Thakur comes dressed well in black suits and wearing black shades and looks as detectives. Both welcomes SRK and Kapil informs that Raju does good mimicry of SRK and then Raju goes on to mimic SRK speaking to Simran and pokes fun on SRK’s dialogue delivery and expressions. Raju mimics SRK’s dialogue that there are two ways always – good and bad and then makes a fun whether those ways are following in his mind. SRK then speaks that if Raju and others thinks that stars will be happy if they mimic them but suggests that they don’t feel happy. He asks them in which movie has he spoken Aa.. Kiran and suggests that comedians make fun of him. SRK goes in heavy tone and angry with the comedians and Kapil tries to calm SRK down. SRK then goes on to speak more angry words and speaks that Raju and others don’t have any manners. This will be the same Prank which Sr. Bachchan have done on Raju when he came on Comedy Nights for the promotion of his movie Bhootnath Returns.

After some time, there is a virtuous cycle of Daadi’s Shagun ki Pappi, Daadi first kisses SRK, SRK in turn kisses Vivaan, Vivaan kisses Sonu, Sonu then kisses Farah, Farah kisses Boman (and even he kisses her), and then Boman kisses Abhishek. Now, comes the turn of Abhishek to kiss Daadi to complete the full cycle. A hilarious moment indeed.  Later on, Kapil props up his same english skills comic act and speaks with Farah and Deepika in english but many times he looks in his hand note to recall sentences.

SRK is in a fun dance with an audience member who dances in Nagin style on Main Teri Dushman song. SRK is seen to be having lots of fun and Abhishek has the last laugh after seeing that performance. There is also a Kabbadi fun match there with Abhishek, Boman and Vivaan on one side and Daadi, SRK and Sonu to be the other team. Abhishek is seen venturing into SRK and Daadi’s court and trying to get hold of Daadi and touch her so as to win a point. It turns out that instead of Daadi, Abhishek gets hold of SRK and takes him along while carrying. Kapil speaks the dialogue from SRK’s movie Om Shanti Om –  Ek Chutki Sindoor Ki Keemat Tum Kya Jaano Ramesh Babu… and asks SRK How will he speak the same dialogue in an angry tone ? SRK speaks on a lighter note that he needs to visit the Wankhede stadium first and then speaks the same dialogue in angry note and appends the Bahen Ke Bhai at the end invoking much laughter. Some of the hilarious moments will be when Daadi in full spirits wants a selfie with SRK, Abhishek and Sonu in SRK’s standard pose of bending a bit with his right hand forward. Vivaan will agree to the request of HNY team to give a pose of a ballet dancer (ballerina) [Men is referred as Ballerino] which will make everyone laugh. Wishing the best to Happy New Year movie which releases on 24th October 2014 and its team. Stay tuned to Comedy Nights with HNY Team this weekend at 10 PM on Colors.