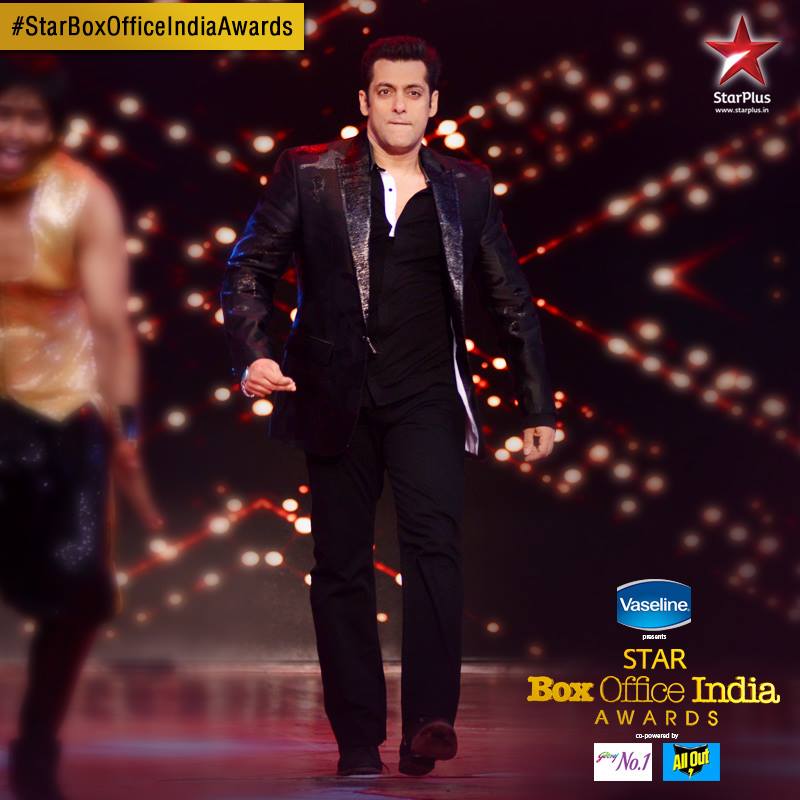 Star Box Office Awards will reward Bollywood movie success at the box office. The Hosts for the evening are Actor Ayushman Khurana and Actor/Musician: Ali Zafar. Bollywood celebrities and Actors/technicians will add grace to the show and will make it more exciting.

Shah Rukh Khan and Deepika are seen on stage with Happy New Year team along with Ali Zafar and Rohit Shetty who was there on stage to present an award. Rohit speaks that whenever SRK and Deepika are together they ignite fire with their presence and chemistry. Just then, SRK and Deepika starts to dance on Manwa Laage song from their movie and shows excellent chemistry between them and carries smile. Rohit then wants the HNY movie team to show similar chemistry like SRK and Deepika, and then Sonu tries to hold Abhishek to enact a romantic scene. Salman Khan will be giving a performance on stage and enthralls the audience with his energetic dance moves.

On another occassion, directors Rohit Shetty and Imtiaz Ali comes on stage to present the box office award and calls Akshay Kumar as the award recipient. It is shown in promos that Salman Khan walks out on hearing it which is just a small time prank. Some of the other performers on the award night are Priyanka Chopra, Alia Bhatt, Shahid Kapoor. SRK, Salman, Sr. Bachchan and Akshay Kumar will groove together on stage which would mark their presence in that set-up for first time.

Alia Bhatt is seen on stage and speaks to all on sharing a joke with them. She speaks that the joke was – Mary Kom has recently won the medal at Asian Games 2014, and Alia Bhatt has congratulated Priyanka Chopra for it. Everyone gets laugh on that note. Ayushman and Ali Zafar comes to talk with Akshay Kumar who was sitting on his seat and asks him what would be the monthly expenses of a Star ? Akshay replies 3,500 INR should be fine. Ali pulls the leg of Akshay by suggesting whether he speaks of living in fields. Akshay then takes Ali to task by giving some witty replies and all exchanges on lighter note. Star Box Office India Awards is going to be telecast this Sunday (19th October) at 7 PM.

Because of the award show telecast, Star Plus’s weekend offering India’s Raw Star (at 7 PM) and Airlines (at 9 PM IST) will not be telecast and they will be back next weekend.

* For being a sport – Alia Bhatt

* The Day One Award – Singham Returns

* Best Album of the Year – Yaariyan