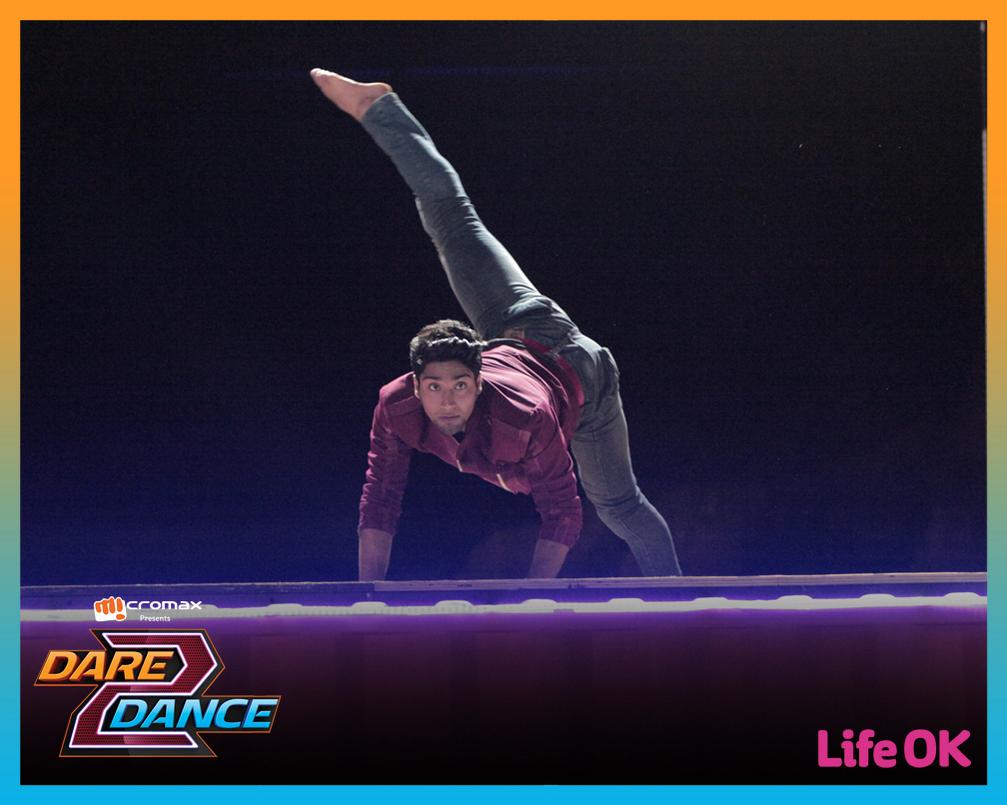 Dare 2 Dance is in its Grand Finale stage in the 7th week and Lisa Hayden starts the finale proceedings by giving a dance performance and introduces the 5 daring finalists – Daring Sanam, Emilie, Amar, Mayuri, and Prince.

Lisa then welcomes Akshay (Host, mentor) who comes with a dare stunt in the air with support of harness and lifts Emilie who shows her aerial expertise. Akshay gives a dancing performance with a group. Akshay greets Lisa and she came to cape town to dance and also brought the Dare 2 Dance winner’s trophy. Akshay speaks of working with Lisa in the movie The Shaukeens.

From the 1st round who comes out as the weakest is eliminated, After 2nd round, another finalist will be eliminated and 3rd round the final one will have 3 finalists who will compete for the Extreme dance Hero – Winner of Dare 2 Dance competition. Akshay speaks that the 1st round is the Dance Relay for 18 minutes and there are 5 dares – hanging platform, stage with fire, prop, stage on water, and dance on a hanging container which will have horizontal movement. The finalists need to perform in cycles (turns) for that duration – 18 minutes.

All contestants with different dares as each one of them are dancing simultaneously. Sanam performs on hanging stage and Mayuri is seen using prop and her dance style is contemporary. Amar is doing classical dance on stage with fire.

Emilie is performing on the barge which is floating just over water.

Prince is seen on the container and his dance style is contemporary.

Sanam goes to a prop and does hip-hop (on Hain Jaan Mein Dum song).

Emilie does break dance on stage with fire. Prince performs on the barge with locking and popping.

Amar goes to the container and does contemporary dance there.

Emilie does the classical dance on the hanging stage and mixes her gymnastic moves.

Prince uses freestyle on the prop.

Mayuri does break dance on the stage with fire and the relay timer has 8 mins left for completion.

Amar does breakdance on barge and uses his hands and does head stand.

Sanam does the ballet on the container.

Prince does break dance on the hanging stage (Jai Ho Ek Zindagi song) and does freestyle.

Amar uses the prop and does freestyle.

Sanam does the contemporary dance on the stage with fire on the same Jai Ho song.

Mayuri does the classical dance on the water barge.

Emilie does the freestyle dance on the moving container.

Amar does hip hop on the hanging stage.

Emilie does hip-hop on the prop.

Prince does the classical dance on the stage with fire.

Sanam does the break dance on the barge.

Mayuri does the hip-hop on the moving container.

All finalists ends their relay round and 18 minutes are complete.

Akshay speaks that everyone have given good performance for 1st round and he took expert advice and only 4 out of 5 will move to Round 2. Sanam receives entry 1st in Round 2, and Amar receives 2nd entry in Round 2 and Emilie receives 3rd entry in Round 2. Mayuri becomes 4th entrant in Round 2. Prince ends his journey with Dare 2 Dance.

Rithvik speaks of giving a surprise to Akshay and goes on to perform on stage and give a dance tribute to Akshay. Rithvik performs on Tip Tip Barse Paani song and dances with a dance partner. He also dances on the Chura Ka Dil Tera.. (Akshay’s song) with another dance partner and performs on other songs, and ends with Hum Hain Seedhe Saade.. Akshay Akshay song.. Akshay praises Rithvik and then other Dare 2 Dance contestants bring Diwali sweets to cherish Diwali since they are all away from families. Akshay gives them special Diwali gifts.

Akshay informs that Round 2 is performed aerially and beneath there is deep ice cold water with 3 degree celsius temperature.

Mayuri comes first to perform an aerial act and her prop is spiral. She performs on the Ang Laga De song and slowly moves to the top of serial and carries expressions on her face. She hangs using the prop and stretches her legs well and uses hands. She caresses to come down the spiral and finishes her move. Akshay appreciates Mayuri’s performance.

Amar comes next and he informs of using moon shape as a prop.  Amar stretches using the prop and hangs down to begin with. He performs on pehli baar Mohabbbat ki hain and hangs and stretches well on that moving prop. Amar speaks of completing all the moves and calls his performance clean.

Emilie comes next and her prop is frame. Emilie on the Mein Pareshan… Naina Doondhe Dar Dar song and she stretches her well on the frame and walks to the top. She hangs to it while the frame starts to move and does spinning move while hanging as finishing move. Emilie speaks of feeling great and things went well.

Sanam comes next and he will do Aerial silk with ring and Emilie have done in earlier round. Akshay thinks Sanam took risk but Sanam have confidence on himself. Sanam starts his performance with hanging on the ring (Qurbaan Hua song). He does reverse spin on the ring and then reaches the cloth to begin the aerial silk routine with 2 ropes. He makes a free fall after tying his feet with ropes well. Sanam performed with a small injury to his finger.

Result after 2nd Round: Akshay speaks to the experts to decide who will proceed to 3rd Round (final one) which needs 3 finalists. Akshay calls Emilie and she gets 1st entry, and then Sanam gets 2nd entry and Amar gets 3rd entry. Mayuri gets eliminated from the show.

Round 3 will decide the Dare 2 Dance winner. A special performance by Gumboot dancers from South Africa is shown with Karan and Sayantani joining them. Karan and Sayantani competes on classical dance form. Akshay also gets gum boot from Francois. Akshay’s various avatars on the show is shown in AV – Host, mentor, friend, motivator, acting, comedy, and humor. Akshay engages in a Dare 2 Dare game with the 3 finalists and if they don’t want to answer a question then they need to engage in the dare part. Akshay asks Amar – Who is the one —–(dash) whose name he likes least and because of —– reasons. Amar chooses dare option. Amar then learns on dancing while wearing girls’ high heel sandals and he has to dance with Emilie. Amar and Emilie dance on Tere Bina.. Tujhe Mainu Na Pyaar Mile.. song and Amar is seen in full spirit. Akshay asks Emilie the question – According to her, one —- deserves a place on the show ? She chooses the dare and has to dance in happy mood on a sad song and then grooves happily on Teri Galliyan song. Sanam also chooses the dare and he has to dance either fast or slow according to song’s rhythm and speed. Sanam dances on the Muqabla song from fast to very slow motion dance and back to fast. Akshay speaks of giving the 1st runner up from his side a sum of 10 lakh INR and the 2nd runner up will get 5 lakh INR from his side.

The final round is on the barge on water and all 3 of them have to battle it out for 6 minutes and compete against each other – fight and compliment each other as well. All 3 performs together in their individual capacity and taking support of others when needed. They perform on a remix of songs – Aa Dekhe Zara, Don, Jhoom Barabar Jhoom, Dhatin Naach. All 3 shows diverse dance styles and with much energy. Emilie does her reverse spins and they all groove together on Dhatin Naach song to end their performance. Akshay have decided the winner after consulting experts. All 3 thinks themselves as the number 1 or winner.

–  Amar as the 2nd runner-up and speaks that his journey was very good. Amar speaks of not feeling well and is sorry to his parents and blames his luck.

– Akshay calls Sanam as the Dare 2 Dance Xtreme Dance Hero and Winner who will take trophy home. Sanam touches the ground in excitement and cries. Sanam speaks of working hard while crying and thanks every one including Dare 2 Dance, Akshay and much love to his mother. He speaks of participating in many competition and has won finally. Akshay showers a warm hug and then felicitates Sanam with the trophy, Honda CBR 250 R sports bike, Tata ZEST car, 1 yr contract with Life OK TV channel.

– Akshay congratulates Emilie on being the 1st runner-up and gives her 10 lakhs INR. Even she cries as well. Akshay signs off by thanking people for their support and ends with the quote Jiski life mein dare nahi, uski life ki khair nahi..