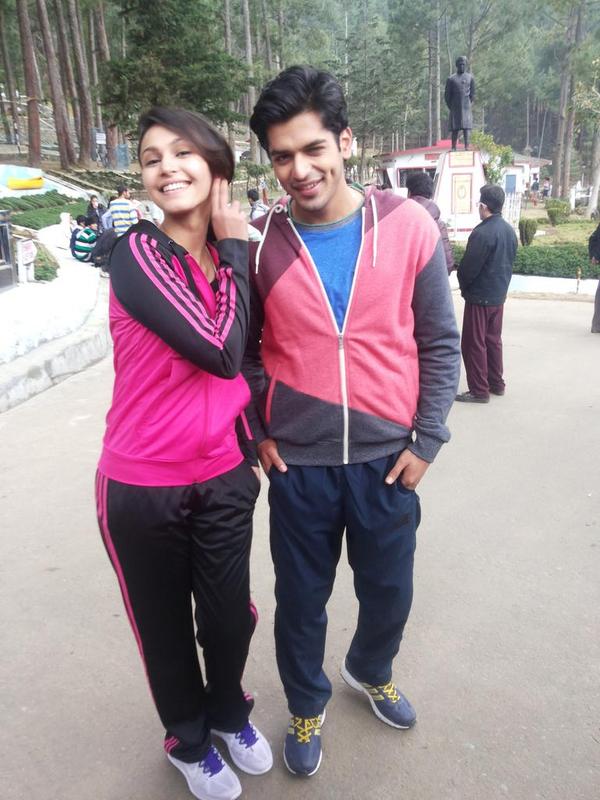 Aakash and Anjali’s bond is getting stronger as days are passing by at NIM training. Aakash flirts with Anjali in a good way – continues to take pics of her and calls her photogenic and putting the thrust on camera instead of him. Their bonding becomes stronger when Aakash stood up for Raman, took his unjust blame in his stride, played against Kabir to win back Raman back in Mountain Rockers. Raman is happy at this development and has stalled his plans to leave NIM.

Aakash regards Anjali as the moon (chand) since she has only goodness and doesn’t have any black/bad side same as the moon which hides its black face. She also reminds him of his goodness. His affection and care towards Anjali was more evident when he spoke about protecting her [Main Tumhe Kuch Bhi Nahi Hone Doonga] in a suave/innocent way. On that note, she shares an eyelock with him in a pleasant but carries some nervousness and shyness, he then retracts by saying taking care of everyone. For Anjali, Aakash is the guy who has the innocence, emotive/expressive, charm, truthfulness, believable, caring and a good friend. The first feelings of love is blossoming in Anjali and Aakash’s heart since both remembered each other fondly with a smile on their faces before sleep. At this point, Anjali doesn’t know about Aakash’s acrophobia/vertigo problem and his loss/ grief of losing his closest friend Gaurav. His phobia of heights again comes to reality when he has to complete the outdoor wall climbing and freezes after reaching certain height since Gaurav’s fall to death continues to haunt him.

Aakash finds support from Anjali who was also climbing, and consolidates him in finishing the outdoor wall climbing exercise. Later, Anjali gives him encouragement by citing that he has to overcome his fears as the challenges will grow with scaling of heights and Everest’s height to be the zenith. He listens to her patiently. Such support from Anjali will strengthen their friendship, instill the value of trust and keep their unspoken feelings intact. Moreover, it will also give Aakash strength to overcome his acrophobia/vertigo health issue which is his personal Everest. Will Aakash open-up to Anjali and inform about his acrophobia/vertigo problem ? Aakash and Anjali’s meet-up at the NIM looks not coincidental but actually feels that the entire universe conspired in their meeting at that place (NIM) while also developing the settings just to trigger blossoming of their love. How their friendship, feelings of love, and trust (camaraderie) for each other grow as the NIM training progresses further ? Keep Reading.