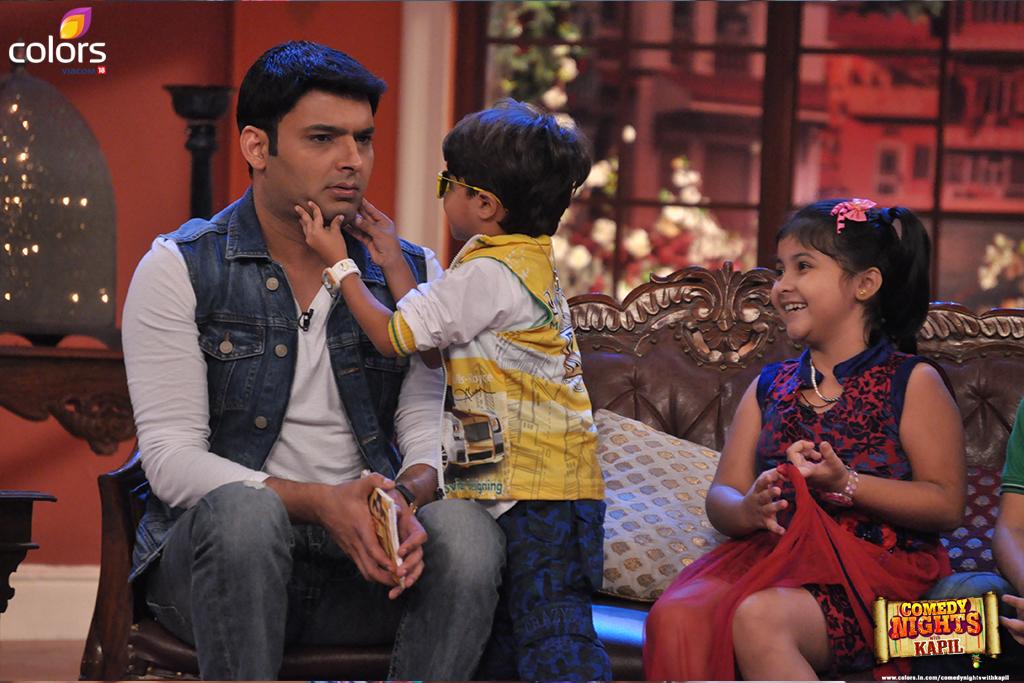 Kapil welcomes all and speaks to Siddhu that today’s children are smart and very much intelligent and cites that his childhood was not so interesting. He says that even a kid studying in 5th standard is roaming with a girlfriend and quite confident. Kapil wants to take out all the things which he have missed in his childhood by flirting now. Soon, Mona Singh comes there and Kapil tries to greet her in an adorable way.

Mona greets Siddhu and gives him a Tiger toy as present. Kapil tries to flirt with her and she replies on having the same situation like his sister. She takes out her sandals and wants to hit him but he manages to divert her attention and starts speaking about sandals. He wants discount in sandals and Mona advises him to buy sandals for his girlfriend. He replies on not having girlfriend and even haven’t sat with a girl in the corner of a movie theatre to watch a movie. Moreover, he suggests on not knowing what to do while sitting in a corner with a girl. Siddhu and everyone gets a laugh and Mona speaks of watching the movie together Zed Plus which is her movie. She is selling sandals in the movie and her co-star Adil is portraying the role of Aslam Puncturewala, her husband. Actor Adil Hussain comes on stage and Kapil welcomes him. Kapil informs that Adil ji also worked as a stand-up comedian before and wants some glimpses of it. Adil enacts a dialogue in the role of Sr. Bachchan from the movie Don and directing at Roma. He speaks in baritone voice during the dialogue and Kapil aka Bittu is impressed. Mrs. Bittu Sharma (Manju) comes there and starts to have regular banter and Nok-Jhok with her husband Bittu. She finds some company in Mona and gels well and sooner make a plan with her to teach Bittu some sort of a lesson. Will they succeed in achieving their plan ? Kapil also speaks of watching the trailer of Zed Plus, and describes a particular scene in which Adil in the role of Aslam is going to freshen up in the field at some distance from his home while having many security guards following him. Kapil suggests that what a person is feeling and how the pressure build-up will get affected in such a scenario with some many people following you and also the delay invoking a laughter. Kapil thanks them for coming on Comedy Nights.

Daadi comes on the stage while doing Bhangra dance and in full spirit and also wearing a floral garland. Kapil invites all the kids on stage, Ruhi, Naksh and other kids come on stage and greets Siddhu. All kids runs to get seat on the sofa and Daadi is impressed with them. Daadi interacts with them nicely and shows affection. Palak comes dressed as a young girl and starts interacting with Ruhi and other kids. She wants them to repeat a tongue twister phrase – Oont Ooncha.. Oont Ki Peet Oonchi..Pooch ooti Oont ki. Ruhi and other kids are puzzled. Palak comes with another twister – she says seals there on the sea shore. The kids couldn’t repeat it and Palak have the last laugh. On another occasion, a young kid speaks of preparing a poem for them and then recites the poem and pulls Bittu’s nose and then goes on to do the same thing with Siddhu. Bittu calls it a nice poem and then kids dance on Indiawaale song. Some more kids come on stage and grooves well and having good time. Kapil signs off by asking people to keep smiling, laughing and watching Comedy Nights.

Additional Note:
* Adil Hussain is an Indian stage, Television and film Actor.
– Some of his recent Bollywood movies are English Vinglish (2012), Lootera (2013) and Kanchi (2014).
– He has worked in Hollywood movies as well. Some of those are – The Reluctant Fundamentalist and Life of Pi both in 2012. Read more at his Wikipedia page
* Mona Singh is a Television and Film Actor, Host and Dancer.
– Debut with the role of Jassi (Jasmeet Walia) in Sony TV’s Jassi Jaissi Koi Nahin (2003-2006)
– Recently, played the role of Mona Pradeep Singh / Mona Chopra / Mona Jatin Chopra in Sony TV’s Kya Huaa Tera Vaada (2012-2013).
– Winner of Jhalak Season 1 (2006), Host of Entertainment Ke Liye Kuch Bhi Karega (For all 5 seasons). Read more at her wikipedia page.
* Zed Plus movie is the story about a common man getting a Zed Plus security and what follows after it. Read more at its Wikipedia page. It is scheduled to release on 28th November 2014.
* Shivansh Kotia (Naksh) Wikipedia page, Ruhanika is 7 1/2 years old and have interests in dance which she does regularly.

Update:
* Kids of Ali Asgar, son and daughter (Ada) are there in audience. Kiku Sharda’s (Palak) kids and wife are also present and Kapil interacts with all those four kids and have fun time.
* Apart from Ruhanika and Shivansh, some other kids are,
– Kautilya also called wonder child, Google Boy. Kautilya is from Karnal district, Haryana and was awared 10 Lakh INR from state govt for his future development knowing his high I.Q and memory power. Kautilya also appeared in KBC 7 (2013) hot seat and impressed Sr. Bachchan a lot. Kautilya’s Wikipedia page to know more about him.
– Kautilya has good grasp on current affairs and general knowledge and also witty and shows such attitude by pulling the leg of Kapil.
– Amrita (pihu from Sony TV’s Bade Acche Lagte Hain).
* Aryan, Sirat, and Dalessa are other kids who come on Bum Bum Bole song. Dalessa speaks of marrying Kapil uncle and kids have good fun. Aryan speaks of wearing black shades for style. Dalessa also speaks some german language while interacting with Palak invoking many laughter.