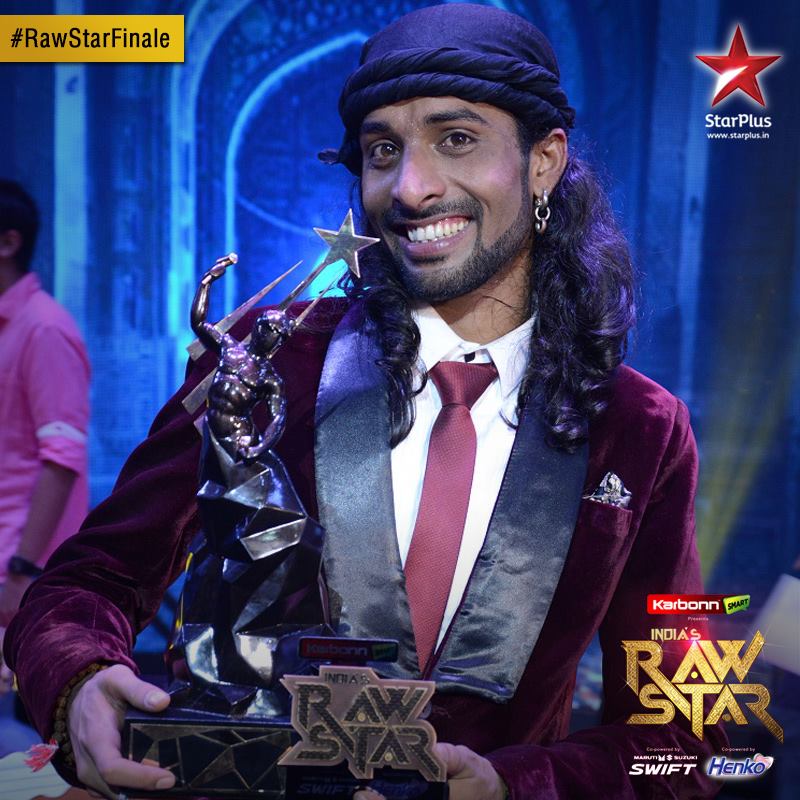 India’s Rawstar Grandfinale was telecast yesterday and the night came after 14 weeks with 12 Raw Artists participating in it. The voting lines for fans were opened for 1 hr (7PM to 8 PM) with unique votes counting and only 1 vote/phone was allowed. The three finalists were Darshan Raval (heartthrob), Mohit Gaur (storyteller) and Rituraj Mohanty (Mast Malang). The winner’s prize is Star Plus Contract, 50 Lakhs INR, and Maruti Suzuki Swift and Rituraj Mohanty emerged as the winner. Rithvik Dhanjani, actor accompanied Gauhar Khan as the co-host/entertainer and acted like the Artist manager of the finalists. She tried to pull Rithvik’s leg on many occasions to make the environment lively and humorous.

Rithvik comes there as Artist Manager and pulls Mohit, Rituraj (malang, Dabangg), Darshan’s leg and humorously comments on his own surname Dhan.. Jaani suggesting he will go where there is money. Actor Manoj Tiwari, Raw star contestant Pardeep and Musician Badshah does a rap song performance together. Manoj speaks of finding Bhojpuri people all over the world. Badshah choses Rituraj while Manoj chooses Darshan as his favorite for winning the title. Himesh who is the mentor of Rawstarts comes and sings several songs which he has composed – Tera Pyaar Pyaar.. Hukka Maar; Aaja Meri Gali; Chalo Nain Re Jaan Lelo; and others. Gauhar and Himesh share good camaraderie and both call each other multi-talented. He gives his suggestion to upcoming musicians that focus, practice, hardwork, and parents blessing are needed to excel in a music career. Himesh supports Darshan.

Gauhar speaks of Swacch Bharat program and raw star artists have prepared a special anthem/tribute. Singer Shaan is part of it and the anthem’s essence is Vande Mataram and to regard the Swacch Bharat program as your dream. Sachin-Jigar are the composers of the anthem and they urge the people to share the anthem video by tagging friends and express their thoughts. Jigar chooses Rituraj as the winner. Musician Badshah performs on Saturday Saturday song; Abhi to Party Shru Huyi Hai song with raw star contestants Akasa, Mansheel, Nimique, Dipanita, giving him good company. Gauhar sings a line from Party to Ab Shru Huyi Hai song and thanks Mansheel, Akasa, Rimi, Dipti. Akasa sings in rap manner to describe her fellow contestants and Badshah speaks a witty phrase. Rithvik as manager continues to act humorously and wants to get the girls attention since he calls himself as their manager but in vain.

* Rituraj performs with Singer/Composer Kailash Kher.
They sing and perform together on the Mil Ke Bhi Hum Na Mile.. Tumse Na Jaane Kyun; Main Jag Hara.. Bawo Re. songs. Rituraj speaks of being a big fan of Kailash Kher and his parents are also there. Kailash speaks of being lucky to come there and greets the team and compliments Rituraj and suggests that he has love and good manners while doesn’t have much hold on the language [since Rituraj is from Orissa]. Himesh calls Rituraj a consistent performer and true rawstar. Rituraj’s father who is present there suggests that Darshan and Mohit are also like his son and people will decide the winner.

* Darshan Raval performs with Singer Mohit Chauhan.
Mohit and Darshan sings the song Pehli Mohabbat Hai..song while standing in an hanging illumninating hexagonal unit. Darshan later sings solo – Subah Hone Na De…Main Tera Hero song in his own style. Mohit speaks of meeting Darshan for the first time on Raw star on the grandfinale night. He suggests on not knowing what to do at Darshan’s age (19 yrs). He compliments Darshan for composing his song. Mohit supports Darshan and Sajid/Wajid also compliments Darshan as he writes down his own songs and music composition.

Arjun Kapoor pulls Darshan’s leg and speaks with his parents. Darshan’s father speaks that girls like his son’s voice. He is fondly called Gabbu by his mother and she wants a caring and strong girl for him. Later, Gauhar performs on the lovely song from Happy New Year; and Kamli song from the movie Dhoom 3; Tere Bina.. Devil Mera Yaar song from Kick movie. Jeffrey and Darshan comes to dance with Gauhar on the Chokra Jawaan Re song.

Final performance of Finalists like face-off and India’s Rawstar Winner:
Darshan, Mohit and Rituraj perform on Yeh Ishq Ishq Hai (semi-classical composition) with Kajra Re remix song and show their musical prowess via Sa Re Ga Ma Pa Sur. This track is composed by Sachin-Jigar and Sachin praises Mohit and thinks he shined much and calls him a genuine artist. Sajid-Wajid also praises the face-off and liked the Alaap (at the intro of song) that all 3 of them took and speaks about no loopholes and good understanding between them. Darshan sings the rap – Ishq bina kya jina yaaro. In the end, Gauhar declares Rituraj Mohanty as the winner. Rituraj wins Star Plus Contract, 50 Lakh INR, and Maruti Suzuki Swift as prize. He erupts in joy and Himesh felicitates him with the trophy in his parents company. He thanks all and kisses the ground to show gratitude and signs off by singing few tunes of Teri Galliyan song.

* We wrote this article with the content of the Grand Finale Episode but would like to comment on Gauhar Khan’s incident. We (TellyReviews) provide our support to Gauhar and any violent or mental abuse against women is unacceptable.

* Actor Mrinal Dutt portraying Raffe Roy Choudhary in Star Plus’s upcoming weekend show Private Investigator came during the show and confronts the manager (Rithvik). He gives his introduction – criminology student and his passion to get finer details when observing things and moreover to see hidden things with ease.