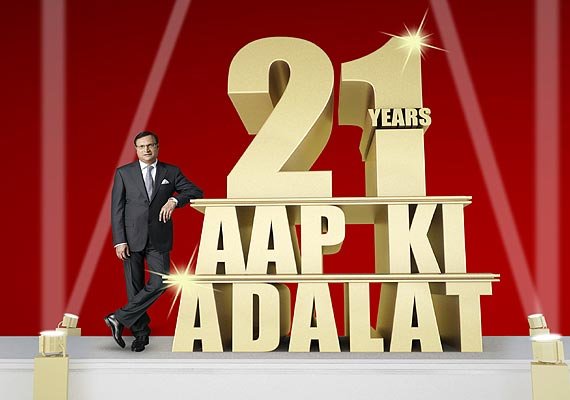 Actors and Superstars – Aamir Khan, Shah Rukh Khan, Salman Khan are the guests on Aap Ki Adalat 21 years celebration. Aap Ki Adalat is a program on India TV where Rajat Sharma runs a case with a celebrity and known person by putting  him/her inside a witness box with a guest judge who gives his verdict at the end. SRK welcomes Salman with fervour by calling him Salman Bhai. Salman comes on the podium with happiness and he in turn invites Aamir on stage. Aamir, SRK and Salman are together on stage and Rajat Sharma speaks that the more they are getting stronger he is becoming afraid on a lighter note. Aamir, SRK and Salman will groove on Salman’s towel dance step with Rajat Sharma and the duo Salman and SRK will also shower Rajat ji a kiss as well. Aamir in his individual capacity was on Aap ki Adalat in January 2013; Salman had attended Aap ki Adalat in March 2014 (Episode Video) and SRK attended it last year in August 2013.

Some of the distinguished guests are Prime Minister of India – Narendra Modi, and Arun Jaitley – Minister of Finance, Corporate Affairs and Information and Broadcasting. Singer and Music composer Sonu Nigam; Actor/Star Sonakshi Sinha along with her father Shatrunghan Sinha are also seen in attendance. This special episode is telecast on Star Plus on 7th December (Sunday) at 10:00 PM.