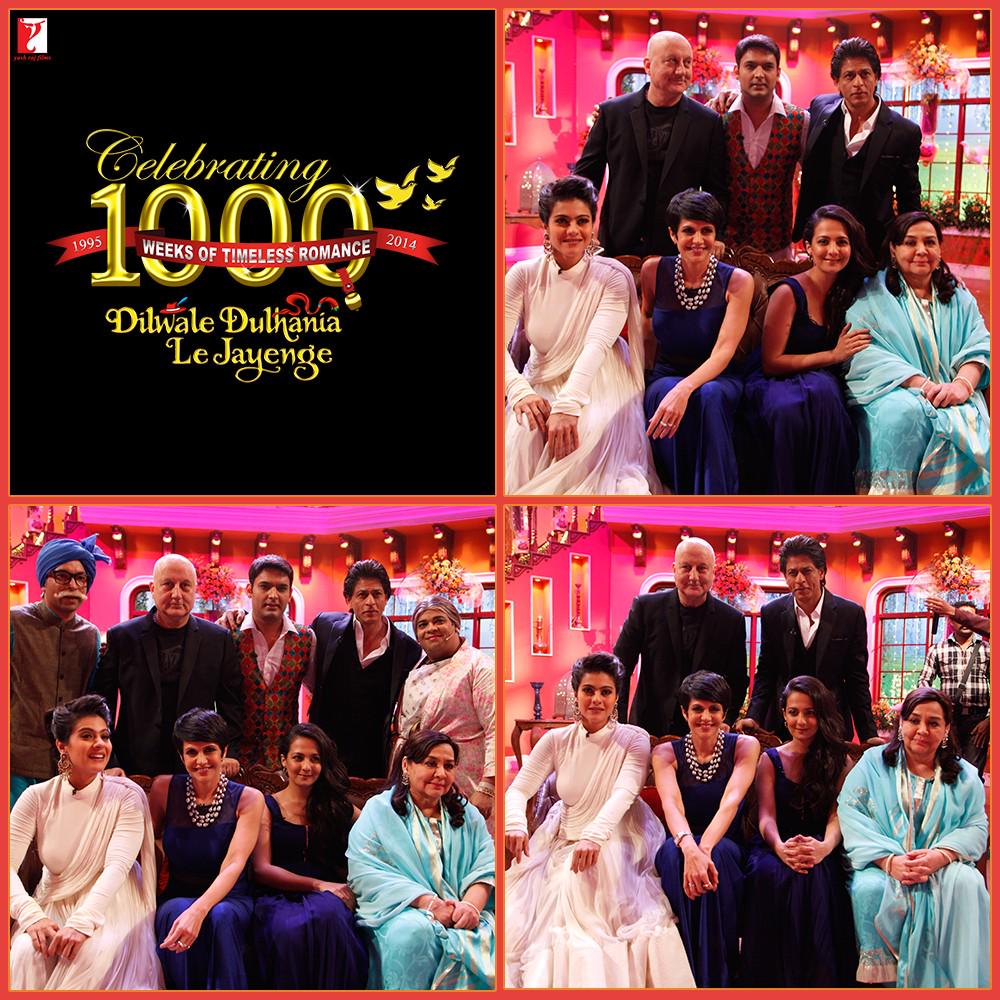 Siddhu starts the show and marks his entry by coming down from the stairs and enacts the role of Raj and playing Guitar on Tujhe Dekho To Yeh Jaana Sanam tune. Kapil comes there and asks Siddhu what is happening in front of his back humorously. Siddhu leaves from there and Kapil asks Kajol whether her husband Ajay takes her suggestions before signing films. She replies ofcourse yes and have given him good training and then shares few instances – When Ajay did Singham he has incorporated the dialogue Aata Majhi Satakli which turned out be very famous and she regards on suggesting it and speaks of her background which is half-Maharashtrian; Ajay did a movie on Shaheed Bhagat Singh and he spoke a Bengali dialogue in that movie. Kapil speaks of learning something interesting from Kajol that Ajay didn’t say anything and only listen to her training. For instance, when she has taught him Aata Majhi Satakli, Ajay being a punjabi haven’t tried changing it to Aata Majhi Ghumgiye… Kapil calls Ajay as an obedient husband while Kajol is a supportive wife.

Kapil speaks that Ajay is giving hit movies one after another and then asks her with whom Ajay is best paired with on-screen– best jodi. She replies with her both on-screen and off-screen. Kapil then suggests on knowing that even Singham’s wife is also Singham and everyone smiles. He then wants to become Raj just to get a feeling since Siddhu also enacted Raj a while ago and also SRK is not there. Kapil enacts as Raj and Kajol being his Simran. Kapil acts like Raj in SRK’s style on the Tujhe Dekho To Yeh Jaana Sanam tune and she wants him to stop on lighter note. Sooner then, SRK comes with a bang and goes on to enact the same DDLJ song – Tujhe Dekho To.. and shows the dance moves and then goes on to one knee and showers a kiss on Kajol’s hand. To make it more funnier, Kapil follows SRK and kisses his hand after SRK completes his kiss to Kajol invoking much laughter. The audience chants SRK’s name. Kapil speaks of a song Ruk Ja O Dil Deewane and then plays it and wants to ask a question related to it. He shows the video of the song where in the end Raj drops Simran. Kapil asks Kajol how come she fell in love with Raj though he made her fall badly by being carefree. Kajol replies that Simran after that fall was very angry with Raj and even her expressions say it all. SRK then steps in and suggests Kapil that Raj was getting so much applause that he wanted to greet people and forgot about Simran and thinks he did the same like Kapil bringing laughter and also adds that there was nothing personal.

Kapil welcomes Actors and Cast of the DDLJ – Anupam Kher, Farida Jalal, Mandira Bedi, and Pooja Ruparel who come on Aeye Meri Zohra Jabeen Tujhe Maloom Nahi.. [impromtu part in Mehendi laga Ke Rakhna song picturized on Simran’s father – late Amrish Puri].  SRK greets all his co-actors. Kapil asks Farida ji about how many times late Amrish Puri ji have said Aaooo Aaoo (please come) to pigeons in DDLJ with much respect. Farida ji smiles on that question a lot. SRK in his wits suggests that its better to know how many times Amrish ji have called Farida ji to come close. Farida ji confronts SRK in a caring manner on that note with some punches and getting hold of him. Kapil speaks to Farida ji that she is so lovely and anyone would have said the same thing and asks her to understand their problem. SRK, Kapil and Anupam ji decides to enact a scene where they are asking Farida ji to come closer to them while they are one knee and making their plea by putting forward their hands which invoke laughter. Farida ji blushes more and becomes more shy to see how naughty they have become. SRK will be jumping with Anupam ji like the one Raj did with his dad in DDLJ and show happiness. Anupam ji will be pulling Kapil’s leg and will make him wears a suit to look like Raj’s Dad from DDLJ. Without any option, Kapil will wear it with smiles. Daadi will try to impress SRK with Jhappi’s (hugs), humorous dialogues and her one liners. The show ends on happy note with SRK grooving and dancing on Tujhe Dekho To Jaana Sanam song with Kapil following his steps. Stay tuned to Comedy Nights on Colors. 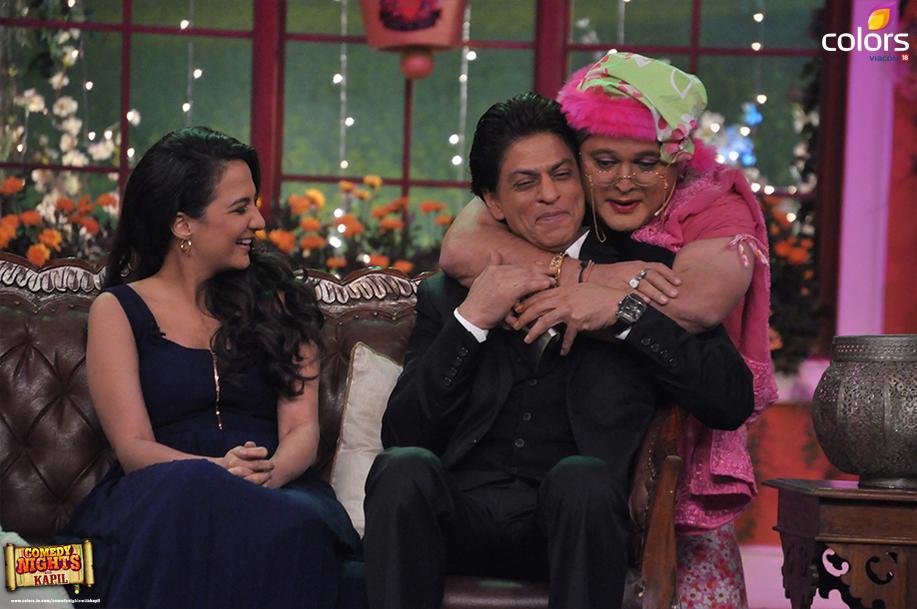 * Mandira Bedi portrayed Preeti Singh, Ajit’s daughter. Ajit was the friend of Baldev (Simran’s father) in India.
– Some of her recent works on TV include: Nikita Rai in Color’s 24 and Zee TV’s Gangs of Haseepur as Judge. Mandira’s Twitter page.

* Farida Jalal is a legendary actress who has worked in more than 200 Bollywood films.
– She worked in Duplicate, Kuch Kuch Hota Hai, Kabhi Khushi Kabhi Gham, and recently Student of the Year to name a few.
– She worked in Star Plus’s TV series Shararat [2004-2009] as a fairy – Sushma Khushwant Mehra (Nani) and many more shows to her credit.
– Currently working in Zee TV’s Satrangi Sasural as the eldest Saas (mother-in law). Read more at her Wikipedia page.