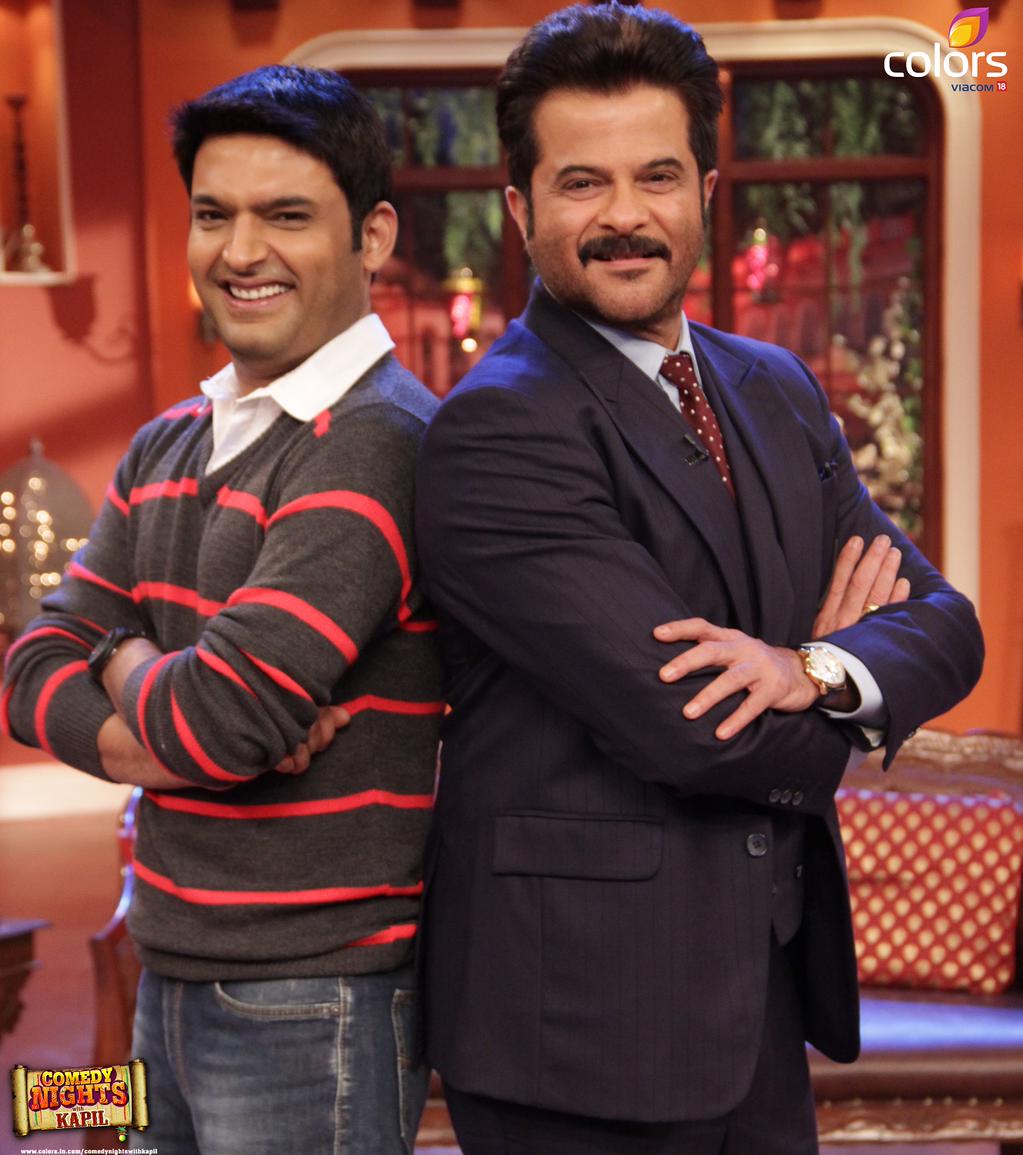 Guest on the show: Actor, Superstar and Producer: Anil Kapoor for the promotion of his TV series 24 Season 2.

Kapil welcomes all on his show and soon welcomes Anil Kapoor by calling him an evergreen actor. Anil comes on the Jai Ho song and greeted by Kapil. Kapil speaks to Anil that he looks the same and young until now and Kapil reminds about his own childhood, present and moreover expects Anil to look the same in his old age as well. Anil pulls Kapil’s leg on that note. Kapil speaks of the movie Nayak where Anil portrayed the role of a CM for one day. Kapil then asks Anil if he would become PM for one day then to whom he will assign the following ministeries – Home Minister: Anil replies wife; Foreign Minister: Sunny Leone; Food Minister: Ganesh Acharya; and Kapil asks about President: Amitabh Bachchan. Kapil opens the floor to the audience and a young man speaks of having a serious matter which he wants to speak and then comes on stage. He speaks of having a request for Anil and it turns out that he is asking for Sonam’s hand from Anil. Anil shuns his request in funny manner while asking him to leave. The young man tries to speak of making Sonam happy with him but Siddhu and Kapil pulled his leg with their one-liners. Anil will be giving quirky answers to his fan and audience questions.

Bua comes for her Lakhan with a harmonium musical instrument and Anil sings some lines for her while holding it when she insisted. She needs to repeat the lines sung by Anil and actually he was preparing to taunt Bua. It goes like this – Main Pyaari Si Kudiyan Hoon Yahoo.. Yahoo.. [I am beautiful Girl….] Main Akal Ki Budiyan Hoon Yahoo Yahoo.. [My Intelligence is of an Old Woman…]. Bua becomes angry and shouts at Bittu asking who is this man which is usual way to show displeasure. Bua again got heart-broken as Anil was successful in passing a taunt at her. Later, Daadi makes a entry on a bang and enacting the role of an Action Hero on similar lines of Anil’s TV series 24. She also carries a dog to represent how she is well planned and can use the dog for sniffer necessities. She shows much energy while enacting some action scene with Anil and couldn’t miss her Shagun Ki Pappi and goes on to shower a kiss.

Gutthi comes on Bada Dukh Dena Tere Lakhan Ne.. and dons the role of Madhuri [Radha’s character]. Gutthi drags on the floor and cleans Anil’s shoes and approaches him very dearly. Gutthi speaks to Bittu that Lakhan is there and introduces herself as Madhuri from the movie Ram Lakhan [1989]. Bittu suggests to Gutthi that everytime she comes in the role of Madhuri. Gutthi replies last time she came on the Dhak Dhak Karne Laga song [Beta movie, 1991] as Madhuri but it was sensuous. Gutthi tries to explain the meaning of the word sensuous but soon backs out. Palak comes on the Rimjhim Rimjhim  song [Rumjhum Rumjhum Bheegi Bheegi Rut Mein Tum Hum Hum Tum Chalte Hain…., 1942: A Love Story movie] and acts like Manisha Koraila [Rajeshwari aka Rajjo’s character]. She introduces herself as Manisha to Anil and then brings a swing [Jhula in hindi] with white seat [Kuch Na Kaho..Yeh to Bata Hain…. song from same movie plays].  Palak sits on it and asks Anil to push the swing so that she can spend time on it in his company. Anil tries to push the swing couple of times  while Gutthi is in her own dance. Soon, Palak was dropped from the swing by Anil when she tried to come close romantically towards him. On  that note, Gutthi reminds Palak why she haven’t listened to her on food discussion. Gutthi suggests that Palak was weighing 126 Kgs and with one burp her weight declined by 4 kg to 122 kg. Just imagine, how much she eats if 4 kgs can go in a burp invoking laughter. Kapil signs off by asking the viewers to keep smiling and watching his show on Colors.

* Harmonium or pump organ that generates sounds with bellows [pair of bellows is a device constructed to furnish a strong blast of air] and is a reed type [A reed is a thin strip of material which vibrates to produce a sound on a musical instrument]. Read about harmonium, reed, and bellows at their Wikipedia pages.