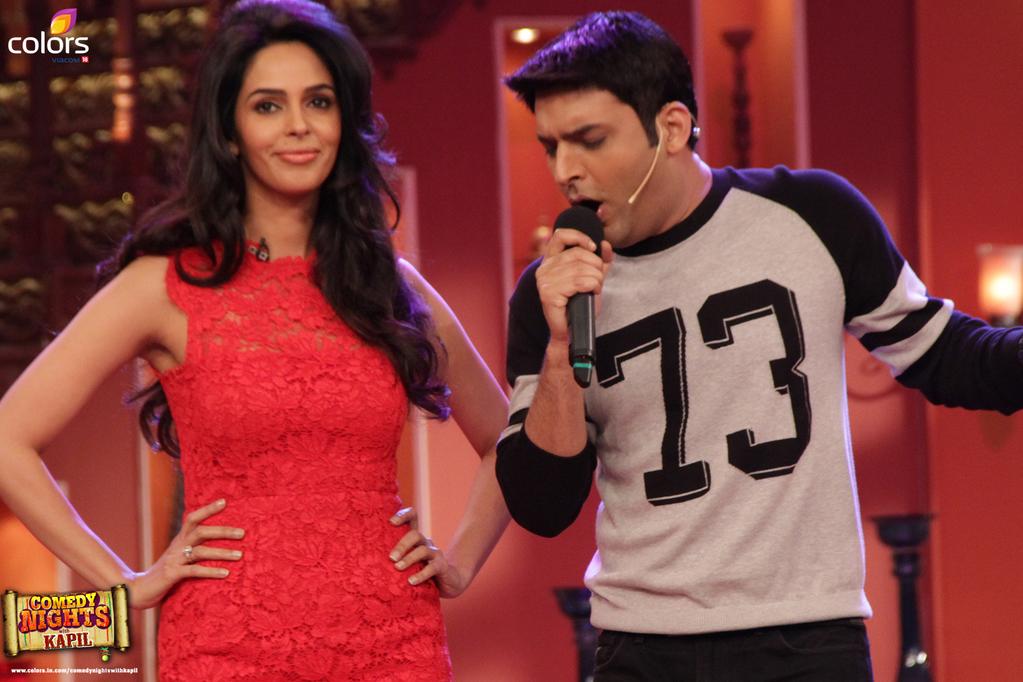 Comedy Sketch with Bua, Gutthi, Daadi, Shamsher, Mandana, Tusshar and Aftab.
Bua is reading a newspaper of the next day since she finds it more interesting than the current day and learns that a married women ran away with her lover. She then says its right to say that women destroys the house on a lighter note. Gutthi comes and meets Bua and asks whether she has seen news on TV. Gutthi speaks that some goons are on the run from police and Bua thinks that its good and suggests that goons are the ones who don’t get brides easily and even families are not interested in them. Bua thinks if goons come to her home they will find 2 beautiful girls aka Gutthi and Bua. Gutthi pulls the leg of Bua by suggesting she is also beautiful. Bua finds two men coming in her home and calls them as goons [Daaku]. Actors and stars: Tusshar Kapoor and Aftab Shivdasani make their entry as those men. Gutthi gets hold of Tusshar while Bua takes Aftab. Bua suggests them to leave her while she herself not wanting to leave them and happy with them. Aftab and Tusshar are surprised and Gutthi calls herself as a goon and thinks that two sets of goons can  get caught and fight between themselves so its fine. Tusshar speaks of coming there to find a family. Daadi hears it from inside and comes on the stage with energy and begins with a Warning that no one can speak about taking her family. Soon, she recognizes Tusshar and Aftab and cuddles them in her usual self. Gutthi goes away after hearing police siren. Kapil comes on the stage as Shamsher and shows his aggression on an alleged accused man and soon let’s him go. Shamsher asks the men Aftab and Tusshar on how to become cool ? Aftab suggests that a hot girl in his company will make him cool. Shamsher speaks of not having budget and Aftab says its fine and welcomes actress Mandana Karimi as the hot girl he was referring to. Shamsher starts to dance with her and is enjoying her company and the same man who was thrashed earlier comes and dances with Mandana. Shamsher thrashes the man again which ends the act.

Mallika’s interaction with Bittu & his family, neighbors and Audience:
Kapil welcomes all and speaks that today people will feel like summer though we are in winters since there will be much hotness. Kapil then sings Bheege Hont tere.. Pyaasa Dil Mera song fondly for Mallika Sherawat who makes her entry on that song. Kapil greets her whole-heartedly and Mallika speaks of seeing his show and finds him regularly flirting with all actresses who come as guests. She then wants to give a punishment to Kapil and  he has to stay away from her with a gap of 1 feet distance. Kapil replies by saying the proverb – Where there is will, there is a way and speaks of his WIFI kiss and then showers a kiss to hand and suggests that it will pass on to her. Mallika wants to first speak with Siddhu and goes to meet and greet him. Siddhu shows some nervousness and speaks a dialogue to compliment Mallika – He was thirsty for a drop of water but now is much worried to find an entire sea. She speaks to Siddhu on hearing and learning that he remembered her a lot and thus wants him to share a poem/couplet while looking into her eyes. Siddhu is hesitant to look into her eyes and speaks a couplet which suggests  that the one who comes forward openly is Mallika.

Daadi comes and greets Mallika. Mallika showers a shagun ki Pappi to Daadi which makes her surprise. Daadi then speaks to Siddhu that though he has complimented and pampered Mallika with his one-liners but what he got Baba ji ka Thullu. Daadi then goes on to shower a Shagun ki Pappi to Mallika on her hands. Chaddha uncle is fond of Mallika and will make a superman entry on the show using harness and cables. His efforts are to impress Mallika. Palak will try to impress Mallika with her antics and Sunil Grover will enact as a presenter/dancer when he meets Mallika. Mallika speaks of a fantasy and her liking is to see Siddhu run on slow motion on a cricket field. For her, Amitabh Bachchan comes first and then Siddhu in slow motion dance. She wants Siddhu to enact the slow motion run on the show. Siddhu starts to do slow motion walking and Mallika also enacts the same to give him company. After ending it, he showers a warm hug to her. Kapil signs off by asking viewers to keep smiling and watching his show.

* Mandana Karimi is an Iranian actress working in Bollywood films.
– Mandana was born on 19 May 1986 to an Indian father and an Iranian mother and grew up in Tehran, Iran
– Worked as kinder Garden teacher, Sales Manager for Mont Blanc. Degree of flight attendant from Flight academy of Tehran. Worked in an advertisement with Shah Rukh Khan.
– Making her Debut with Bhaag Johnny that also stars Kunal Khemu and Zoa Morani.
– Bhaag Johnny movie plot – “It is about a man who is forced to lead two lives and the chain of events that follow when he has to opt for one over the other.
– Mandana’s Twitter page