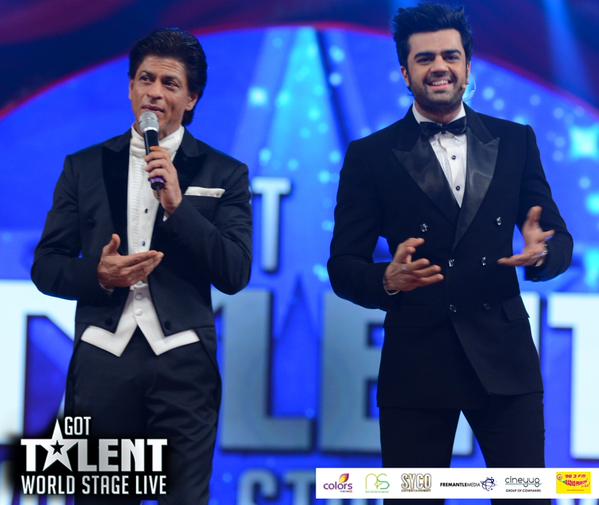 Hosts of the Evening: Shah Rukh Khan and Manish Paul
SRK makes a rocking entry at the Andheri Sports Complex on the Indiawaale song for Got Talent World Stage Live Event. The event is going to telecast on the New Year’s Eve – 31st December @ 10 PM on Colors TV.

Performances by Stars:
* Varun Dhawan is welcomed on stage by SRK. Varun performs on different songs – Saturday Saturday, Tere Dhyan Kidhar Hain., Radha song, I am a disco dancer. SRK calls Varun on stage to have a chat. He first asks Varun to show some mimicry. Varun mimics Mithun Da. SRK also teaches Varun on how to impress girls and will have good exchanges with him.

* Priyanka Chopra comes on the stage via aerial route with large baloon support and makes her entry on the Asalaam-E-Ishqum song from her movie Gunday. She performs on the Darling song, Tune Mari entry, Ram Chahe leela and her own recorded song titled Erase. She dances with finesse with many dancers and gives a spirited and amazing performance.
– Priyanka is also felicitated with Technolicious Talent of the year Award.

Got Talent World Stage Contestants – Some Info:
From all over the world performs one after another

* Aldo Nicolini
– SRK welcomes a contestant Aldo who is a magician, and tries to kiss him but Aldo shows magic and lowers his head many times. In the end, SRK manages to kiss him.
– Since 2000, Nicolini plays the character Ziopotter (Harry Potter’s uncle). Read more at his Wikipedia page.

– SRK speaks of having friendship in 3 Khans now and it looks there are good days. SRK speaks that there is a youngest contestant of Got Talent World Stage live who is also his fan, speaks his dialogues, dances on his songs, and a complete performer. He welcomes Akshat on stage.
– Akshat comes and performs on Salman’s songs – Jeene Ke Chaar Din, Jumme Ki Raat. SRK comes to chat with Akshat after his performance and asks why he was dancing on Salman’s song. Akshat calls himself a chota packet and moreover a smaller version of Salman. SRK asks Akshat to perform on the Bhangra Paale song and only then he can think him as shorter version of Salman. Both dances on that song. Akshat is a finalist of India’s Got Talent and also took part in Jhalak Dikhhlaa Jaa 7 recently.

* Kalutskikh Brother’s – Acrobat; Balancing; Focus and Agility
– Stunning and astonishing co-ordination will stun you
– Daniil and Kirill (both born in 1990) are from Russia.

* Cycle craze-e-crew – Stunts with Cycles [BMX Bikes, stake boards]. Patrick Chenier and his buddy Ben Kaufmann are part of the team and are from Ottawa, Canada and participated in Canada’s Got talent.

* Aldo Nicolini and James More – Magic talents and exhibits their magic using their body – head and lower back respectively.
– James More was born on 1988 and is an English magician. Known for making appearances of numerous different television shows around the world and joined The Magic Circle in 2011. Made his entry to the live semi-finals of Britain’s Got Talent in 2013.He has been doing magic full-time for several years, with it having been his number-one interest since the age of eight. Read more at his Wikipedia page.
– James’s Twitter page