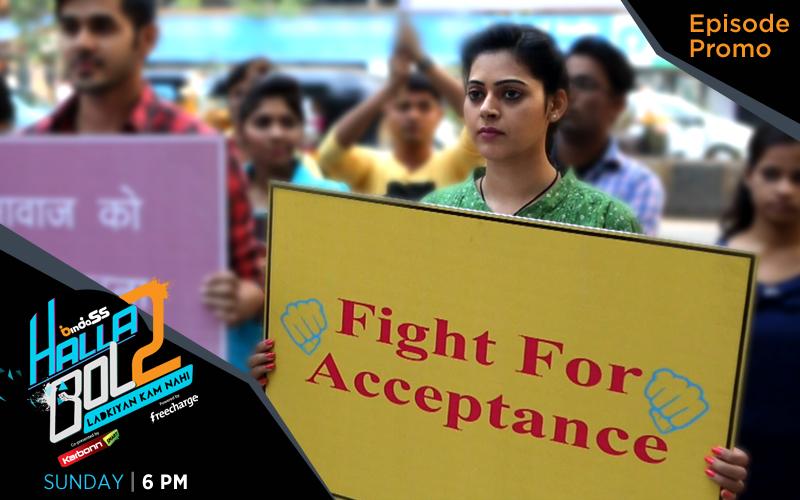 Karan Tacker (the host) starts the show and speaks that you get scholarship to fulfill your dreams and to support education. It also gives the people to change their life for good. It was also changing the life of Ratika who got scholarship but needs to face problems and overcome them. We will see Rati’s special story and her fightback.

The story starts with Ratika in her class at the college and it is set in Thane, Maharashtra in 2008. A professor comes to announce the names of students getting scholarship and Rati is being informed by her friends that she will surely win the scholarship. She is awarded the scholarship and is happy to get that news. She gets the scholarship certificate by the college principal but a boy Akshat of her class is not so happy. He tries to bully her and another boy Varun comes to her rescue. As Varun was engaging in a fight with Akshat, she takes him away. Varun speaks of giving a treat to Rati and wants her to take dinner since a party needs to be celebrated for her scholarship. She becomes nervous on hearing about dinner and excuses herself by mentioning family. Varun then asks her to come for a coffee and she agrees. They go to a cafeteria and have cake with coffee. She thanks Varun for his treat while he thinks to speak to her. He hesitantly speaks of liking her and wanted to say the same earlier but didn’t got strength. She becomes quiet and he asks her reason. She begins to leave from there and he asks whether she doen’t like him. She replies they should not speak of things which aren’t possible and leaves. He becomes sad at his end.

Rati starts walking and reaches her locality which is in red-light zone. A drunk man tries to harass her and suggests that she is working outside. She replies of going to college and he threatens her and reminds how he handles her mother’s work. He speaks of cutting her wings if she wants to educate. He shouts at her and reminds that she has to do the work of a sex worker like her mother. Rati’s mom comes and asks the drunk man Sunil to leave from her daughter. She reminds him on taking care of her daughter and gives support to Rati. Later, Rati and her mom sits for dinner and she shows her the scholarship letter which takes care of the tuition fee. Rati is being told to fulfill her dreams and move far from this place. She promises to take her mom to a new place and will start fresh lease of life. Rati receives a chain to ward off all evils/danger from her mom. Next day. Akshat tries to force on her and he speaks that she was not understanding. She slaps him and asks how he has tried such thing. She speaks of complaining to the Dean and he asks will she complain where she lives and what work she does and about her mom’s work ? He makes taunts at her and wants her to inform about the background to the entire college. He informs on knowing her home in the red-light area. He blackmails her and suggests that she have to disclose her identity to all or has to come close to him. He gives her some time to think and leaves. Rati is dejected and cries after going through Akshat’s blackmail. She cries at her home and remembers Akshat’s blackmail, taunts, and his distasteful offer. Rati’s mom finds her crying and asks the reason. Rati speaks about Akshat and how her identity will be going to be exploited. Next day, she gets taunts from fellow students and Akshat makes a taunt at her. She comes and hugs her friend who asks whether the people are wrong.

Rati’s friend Suruchi asks how come she was hanging out with such a girl Rati and calls her disgusting. Rati asks why she is considering her background but Suruchi doesn’t want to continue the friendship and leaves. Varun comes there and learns what people saying about Rati is true. She leaves from there and comes to her class. She doesn’t get entry in the class and is told to first speak with the Dean. The Dean gives her the leaving certificate and suggests that he doesn’t need to give any justification. He speaks about reputed college and she asks where she will leave and how her background is related to education. He is adamant to not support her and suggests that she might need to repeat for 1 yr and also takes back the scholarship. He doesn’t listen to her requests and calls it as final decision. Rati is dejected and leaves to her home. At her home, she begins to cry and informs her mom of getting expelled from her college since Akshat has revealed her background to all. He had sprayed graffiti on the wall and wrote about her background with taunts – sex worker, item no.

The Dean and all haven’t supported her and she blames her destiny and wonders what was her mistake. She wishes to be not her mom’s daughter. Rati’s mom takes the entire blame on her and suggests that she doesn’t know her husband’s name but has tried to make her daughter’s identity by supporting in her education. She admits defeat and Rati shows support to her mom. Rati’s mom speaks of not having any support for living and have ended in her locality and suggests that her daughter is not weaker than anyone. She wants Rati to fight alone and spread her wings and show to the people who have made taunts and try to lower her self-esteem in the society. Rati’s speak of fighting and will not accept defeat and is also proud of her mom. Rati goes to her college with a banner to show her protest and fight for her acceptance. She doesn’t get entry by the security and other students poke fun at her. Rati stands defiant and comes to her college gate on many days and asking for her right to live a normal life. Varun tries to come forward but he is not encouraged to help Rati initially. However, he comes forward and shows support to her. Soon, Rati found more supporters for her rights. The Dean calls the police who comes to disperse Rati and her supporters and they succeed in doing it.

Karan (the host) speaks that Rati’s mom professsion was not related to her education. The college’s dean was supporting this injustice and wishes that those people would have supported her.

Rati decides to take an extreme step and enacts the role of a sex worker and comes to the college. She puts some posters about her work and the Dean asks why she is dressed like that ? She speaks to him that only in her 2nd year she was expelled from the college and also showed the path to make money. He is angry and she then speaks with clarity that her mom have helped in education but what he has done as the college Dean. She admits her mom works in the red light but has the hope that her daughter will lead a good life in future. She asks why she didn’t got support from her teacher – only because she is the daughter of a sex worker. She gets teary eyed and speaks on how she was deserted by teacher and even friends. She asks what is the difference between them and her but there is one difference. She speaks of being the topper of the college which she earned by hardwork and talent. She is not from a big house and whatever she has is talent. Her talent was suppressed and asks them to first look inside. She informs on how Akshat has tried to force on her and everyone was ok with his abuse. Akshat confronts her and suggests that everyone know who is she and from where she came. He holds her hand and she shrugs it off and gives him a tight slap [Halla Bol tune plays]. Akshat is taken away by his friend. Rati continues with her heartfelt words and speaks of learning the life’s lesson and she needs to overcome being shameful. Finally, the Dean admits his mistake and apologizes to her and with immediate effect gives her re-admission in college and also gives her scholarship. He calls her as the pride of the college.

Varun comes and speaks that from present doesn’t change from past but actually future can change depending on the present. He speaks of not having any affect from her background and what matters is her. He speaks of liking her and wants to live his entire life with her. Varun does the confession of his love to Rati openly and gets applaud. Suruchi apologizes to Rati. Rati gets a job in the college placement and the story moves forward by 3 years. Rati brings her mom to a new home by blindfolding her eyes. She speaks to her mom of getting the home from her company since she got a promotion. She asks her mom whether she is happy. Rati’s mom shows much happiness and showers a warm hug. The story ends on that happy note.

Karan Tacker speaks that Rati was defiant to fight for her rights and acceptance and he salutes her. He speaks that there are many girls who want some support and we need to encourage them. A guest on the show Rani speaks of her mom started doing sex work because of financial problems arose after her father’s death. She lived in the red light area in Mumbai and was studying in 5th standard. Things were going on smoothly and she was told by teachers to work like her mom and didn’t got support. She enrolled in Kranti NGO and learnt dance and even travelled to USA. She speaks that education is girls’ right and there are not lesser to anyone. Karan speaks that the identity of a person is by his/her work and not by name. Karan signs off by asking the girls to have dreams since they are not lesser than anyone [Ladkiyan Kam Nahi in hindi].

Additional Note:
* We (TellyReviews) believe that Actors (specially Priyanka Singh) have given an amazing performance to an impactful story with an important social message. Kudos to Actors, the team and Bindass TV.

Info on Cast:
* Rati is portrayed by actor Priyanka Singh
– Priyanka played the role of Jaya Shergill in Star Plus’ Meri Bhabhi [2013-2014].