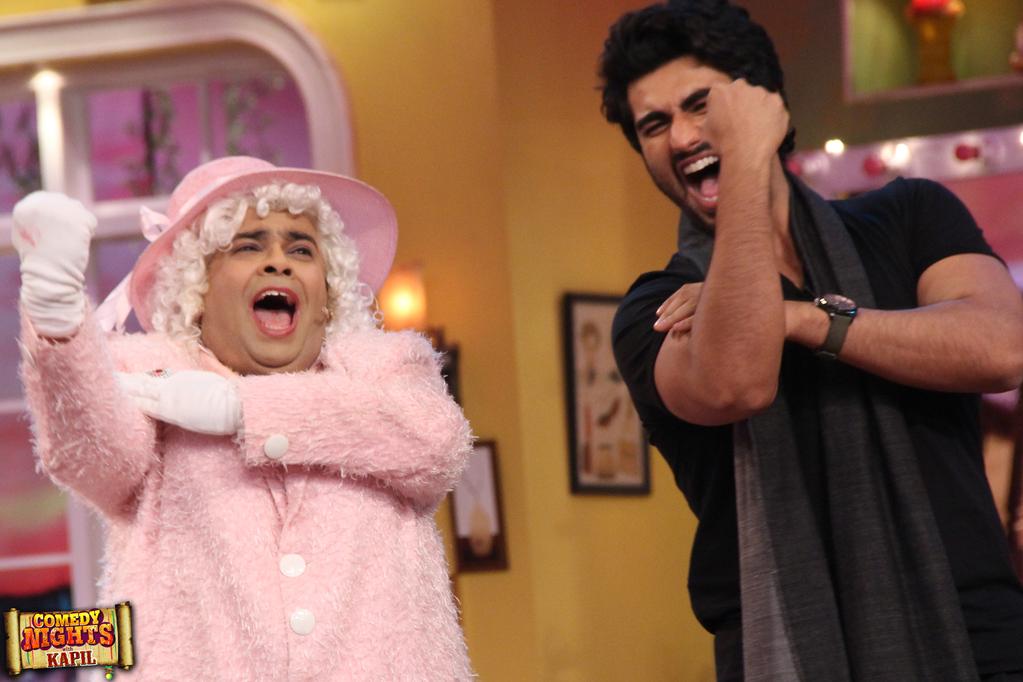 Kapil starts the show and speaks of feeling cool there in London and suggests that a bonfire is needed. Bittu have reached London with Bua and other family members and are visiting his maternal grandmom – Nani who resides there. He greets his Nani with much fervor but she thinks they are a messy family. Later, Kapil welcomes guests on the show – Arjun Kapoor and Sonakshi Sinha and showers admiration. Arjun and Sonakshi greet Kapil in english and Bittu speaks of coming to his Nani’s home. Bittu begins his magazine interview and asks Sonakshi to describe the actor in one word whose names he will speak. First SRK, she replies romantic; Ranveer Singh – energetic; Kapil sharma – Bhaiya (makes a taunt). She goes on to repeat the same when he speaks of her father’s name [Sonakshi Sinha] and gets corrected by Arjun. After some chat with them, Kapil then welcomes Manoj Bajpai and calls him as his favorite actor. Kapil speaks to Manoj that since the producer is Boney kapoor thus the hero gets the heroine and villain doesn’t get any chance. Manoj replies that if the producer’s son is not there then the entire love story will be based on him on lighter note. Arjun then steps in and speaks that Manoj have acted as a big lover boy in the movie and have showed his love with passion. Kapil then speaks of seeing Manoj in Gangs of Wasseypur movie where he has done lot of romance even when the basic necessities were not there at home. Moreover, Kapil calls Manoj’s romance as Shuddh Desi. He then pulls the leg on Manoj’s character in the Wasseypur movie and then speaks on how Manoj portrays powerful characters with ease.

After a while, Kapil welcomes Tevar’s movie producer Sanjay Kapoor who is an actor as well. He asks Sanjay that Arjun’s launch movie was from Yash Raj and wants to know the reason whether they don’t have script or not willing to take risk. Arjun & others smiles on that note. Sanjay speaks of taking risks always and suggests that for Tevar Arjun was the best choice and even if he was not Boney Kapoor’s son even then they would have cast him in Tevar. Sanjay shares an anecdote of placing Arjun as an assistant with director/producer Nikhil Advani and Karan Johar. Arjun also met Salman during that time and then spoke to Sanjay and his family on wanting to become an actor. Sanjay replied then to Arjun that Salman might have told him that he can become actor just to motivate him, and if that doesn’t happen atleast he will try to become slim. Kiku Sharda enacts Bittu’s Nani and wears a pink suit dress which matches with her hat. She speaks of a lovely morning and comments on Siddhu’s green suit in a suave english tone. She sees Arjun and calls him a cutie pie and after seeing Manok she suggests they have a Baaj Pie. Manoj smiles and she then speaks that all those things were becoming like life of pie. She informs Arjun that many years ago when she was in India, she used to go to vegetable market and there the vendors used to say her – Madam Bhoney karlo… which is a humorous comment on his father’s name Boney. Nani also goes on some arm challenge with Arjun and shares some hilarious moments. Kapil signs off by asking the viewers to watch his show and keep smiling. The show ends with Arjun and Sonakshi dancing on superman – Salman ka fan song along with other guests; Bua, Mrs. Sharma & others.

Additional Note:
* Tevar (Attitude in english) movie:
– Remake of 2003 Telugu Blockbuster Okkadu starring Mahesh Babu. Chronologoy of remakes were also in other languages – Ghilli, 2004 [Tamil]; Ajay, 2006 [Kannada]; and Jor, 2008 [Bengali], Tevar, 2015 [Hindi].
– Tevar is scheduled for release on January 9, 2015.
– Some Info on Plot: A kabaddi player saves a young woman from an unwanted marriage and hides her in his house
– Tevar’s wikipedia page.

* PETA India’s Sachbang comes to talk about adopting homeless dogs on Comedy Nights in this episode.