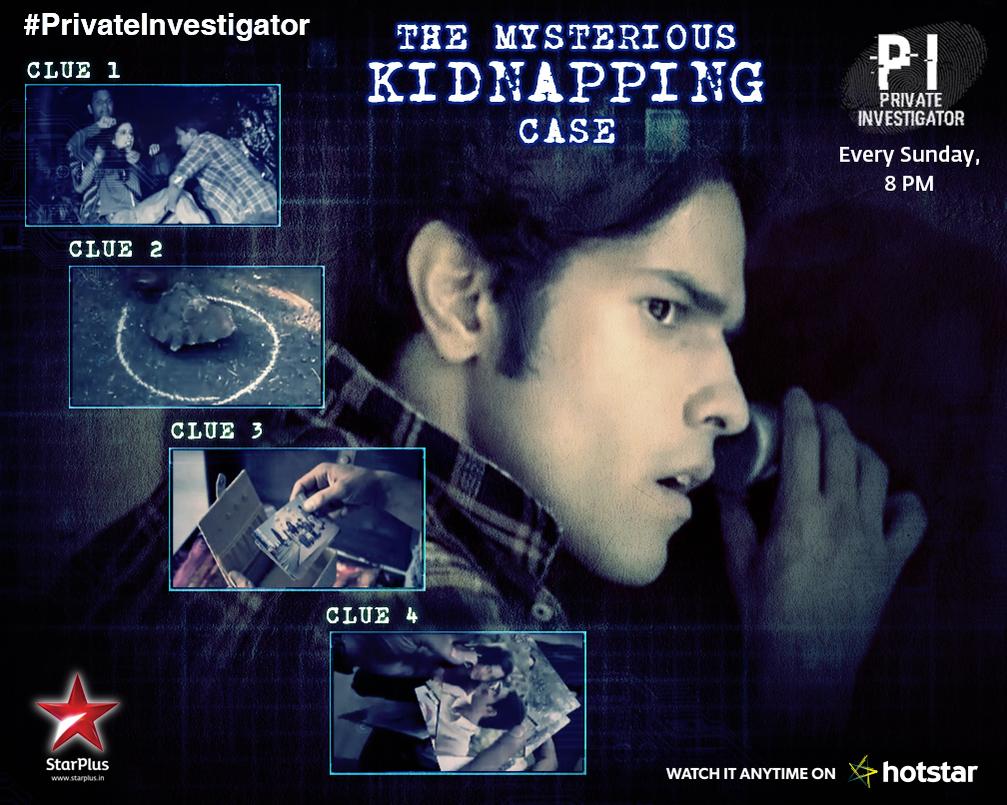 Note: There is no telecast of Private Investigator on 18th January 2015 as Star Guild Awards 2015 takes its time slot.

Kritika is the niece/adopted daughter of a rich man Hirachand. She is going to an Ashram in her car with a driver and they stop after finding someone asking for help on the highway. The driver gets out to help a man but he is attacked and falls unconscious. Kritika is kidnapped and Hirachand meets a Minister at his home and shares his concerns and shows a photo of Kritika seen in kidnapped state. Raffe at his end is meeting a client for his own detective agency R2. It turns out the client – an old man was actually speaking of his pet black cat Malleshwari. Raffe identifies about the cat being missing after finding a ball with some scratch marks and tiffin box. Tiwari at his end reaches Hirachand’s home and learns about Kritika’s kidnapping and Hirachand having received a call at 1:00 am for the ransom amount. Hirachand went with the ransom amount at an underconstruction building on a highway and delivered it and more than 24 hrs have passed and until now he didn’t got a reply. He put the ransom amount in a garbage bin and Tiwari wonders how come 3 crores INR was put there. Tiwari shows confidence and speaks of finding Kritika.

Raghu is upset with Raffe since they need to find a cat and not a person. Raffe gets a message from Tiwari and prepares to go to Alibag. Meanwhile, Tiwari is at the crime scene with his team in Alibag and also Hirachand’s driver Sharma is also present. Tiwari finds a small pit with water and thinks ice might have melted. Raffe comes there and thinks the water could be from rain and thus contradict. Tiwari wants Raffe to praise him and he agrees. Raffe finds a blind spot and also a higher vantage point which have been used by the kidnappers to see kritika’s approaching car. He goes with Tiwari to reach the vantage point. Tiwari finds some evidence there. Later, Raffe comes home and sees the news that with evidence found at kidnapping site, kidnappers are identified – Susheel and Sagar and they are the ones who sell stolen mobiles. But still the kidnappers are not caught. Tiwari praises himself on finding the evidence from vantage point. Lucky is also present in Raffe’s home and informs him on coming to his home for the first time but Raffe informs her of having a case with Tiwari. She speaks of taking Raffe’s mom books and he asks her to register them in a notebook before taking them since they belong to his mom. Raffe leaves to Kritika’s home and takes the pic of the car which was used for Kritika’s kidnapping. The driver Sharma shows concern for Kritika and Raghu meets Sharma’s nephew Umesh who is not a driver but works at a bank. Raffe goes to take pics of Kritika’s room and signals Raghu to take details from Sharma and Umesh. Raffe overhears Hirachand speaking with a lawyer and his brother/cousin and they are talking about marriage and contract signing. Hirachand also shouts at lawyer and his brother and Raffe wonders. Just then, Umesh comes with kritika’s clothes which are found in the car and a lady staff working there behaves rudely with him. Raffe comes inside Kritika’s room and takes pics and learns that she was about to go to Dubai after marriage.

Raffe speaks that her marriage was done for business reasons and soon he finds a box with clothes and finds childhood photos of kritika. Umesh tries to look at those photos and soon Raffe learns that Kritika is the adopted daughter of Hirachand. Meanwhile, the driver Sharma comes and informs Hirachand and his lawyer that kidnappers are caught and Inspector Tiwari will inform them in evening. Tiwari comes to Hirachand’s home later and informs him that kidnappers got a contract to kidnap Kritika and they received a call from Dubai. Tiwari asks on whose name the property is listed and kritika’s father and lawyer doesn’t want to answer. Tiwari speaks about the police’s rights for interrogation and supreme court has given the order. Hirachand is Kritika’s guardian and takes care of her property and Kritika’s father had written in his will on giving the right to Hirachand. Upon Raffe’s insistence, Tiwari asks for how many years the property is to be listed in her name. The lawyer replies 25 years and in 2 months Kritika was turning 25 and if something happens to her then the property will go to Hirachand. After Hirachand, the property will go to his younger brother. Tiwari leaves from there and comes to meet Raffe. Raffe informs that kritika’s kidnapping was just an excuse and actually they wanted to kill her. Raffe speaks of a plan to Tiwari and tells him in his ears. It turns out that Raffe wants to take the role of a policeman to interrogate the kidnappers who are locked up in jail. He wears the police inform and speaks to Tiwari about a game – prisoner’s dilemma which is the oldest interrogation technique [and is also a canonical game in game theory]. Raffe goes to interrogate the kidnappers one at a time and informs them them individually that the other one is planning to become the public witness and cooperating with Tiwari which will secure his release in couple of months, and he will face rigorous jail term for 20 years. Both kidnappers in individual capacity gets worried and are afraid.

They open-up and inform of doing the kidnapping as they were told to get 10 Lakhs INR and after kidnapping kritika they discover on meeting her some 3 months ago. One of the kidnappers inform Raffe that Kritika came with police to arrest them at that time since they stole her mobile and a young driver was seen with her. Raffe then thinks about Umesh and runs to find him and takes help of his friend Sonu. Raffe tries to arrange the clues – there is Umesh and also property angle and ponders. Soon, he finds Umesh running away in an auto and he gets in Sonu’s auto to follow him. He finds Umesh reaching an Ashram and stops since he gets Lucky’s call. He informs her of being busy and ends the call. Raffe gets entry in the Ashram and introduces himself as Umesh’s friend. He finds Umesh there and confronts him and finds Kritika’s photos in his bag. Umesh speaks of loving kritika and he doesn’t have any role in her kidnapping and reminds Raffe that there used to have tension at home due to money matters. As she was forced to have an engagement, she decided to join an Ashram to evade such plans. The Ashram is in Alibag away from her home in Mumbai and Umesh speaks of coming close to her as he was driving her to the Ashram place often. She also encouraged him to join the Ashram and he agreed. He was not a driver’s nephew but an ordinary person there and gradually they developed love for each other. She brought 2 phones and their numbers were only known to them. They used to speak on phone for hours and one day he got a bank job in Bank of maharashtra, Kasara and his one month salary was Kritika’s pocket money for one week. He then realized about his mistake and tried to convince her the difference in their status and gave the example of fish vs. bird. She came back after studying in USA and was not listening but later she agreed with him. Later, she spoke to him of getting a proposal from Dubai and she said yes.

Umesh informs Raffe that on the kidnapping night, Hirachand was very worried and asks him to carry a bag with ransom amount and they reach Vashi and found Kritika’s car. He called Kritika’s phone and the caller at other end informed of knowing about his and Kritika’s relationship and asks him to leave Mumbai in order to be safe. Raffe asks Umesh why he didn’t leave Mumbai ? Umesh asks how come he can leave Mumbai by leaving Kritika. Raffe advices Umesh that its best if he leaves Mumbai since Police can follow him and create troubles. Umesh is defiant and doesn’t want to leave until he finds kritika. Tiwari calls Raffe and asks him to come at the fish market at the earliest. Tiwari is worried since the case is not getting solved. Raffe finds his client’s black cat there and informs Raghu about it. He hands over the cat to his client who wonders why the cat went into a fish market though he is vegetarian. Raffe gets a pointer and is reminded of Umesh’s words of fish and bird comparison and quickly understands the logic of extremes. He looks at Umesh’s bank guest house address and then thanks Raghu and leaves to Kasara. Meanwhile, Umesh comes to the guest house in Kasara to find Kritika there and he informs her that police and others will find them. She asks him to not worry since they have 3 crore INR as well. He informs about his uncle (mama) Sharma working at her home since 30 yrs and is worried about his reputation. She informs Umesh on how she planned her own kidnapping and have employed the mobile thiefs and told them to leave her in the car after the kidnapping.

They followed her plan and she took a photo of herself with robes tied and send it to her uncle Hirachand. She took the ransom amount and came there to stay at the guest house. She speaks of loving Umesh and he thinks her fake kidnapping have given him big trouble and also hurt his spirituality. She asks whether he loves her ? Raffe hears all the conversation and drops a note which they find after some time. It suggests that its good to solve the old relationships before beginning a new relationship. They read it and Kritika decides to call her uncle Hirachand and mends the relationship. Raffe comes back to Mumbai and calls Lucky and apologizes for calling her late. He speaks of being distracted but she thinks its too late and they can speak next day. Raffe comes home and finds his mom sleeping with a book in her hand. He takes it away and she holds his hand. He speaks of knowing that she will never tell to him about his dad but wants to know whether she loves him. She opens her eyes and becomes quiet.

Next week: A man hit a jackpot in lottery and won 7 crores INR. Vijay speaks to Raffe that the person buying a lottery ticket employs a method to choose the number. Later, the lottery winner Rajeev Sharma was going on his bike and a car hits him from behind and he gets killed. Later, Raffe finds the lottery ticket to be missing and also a stranger is linked to the case. Vijay tries to help Raffe with his inputs. Will Raffe solve the lottery murder case ?