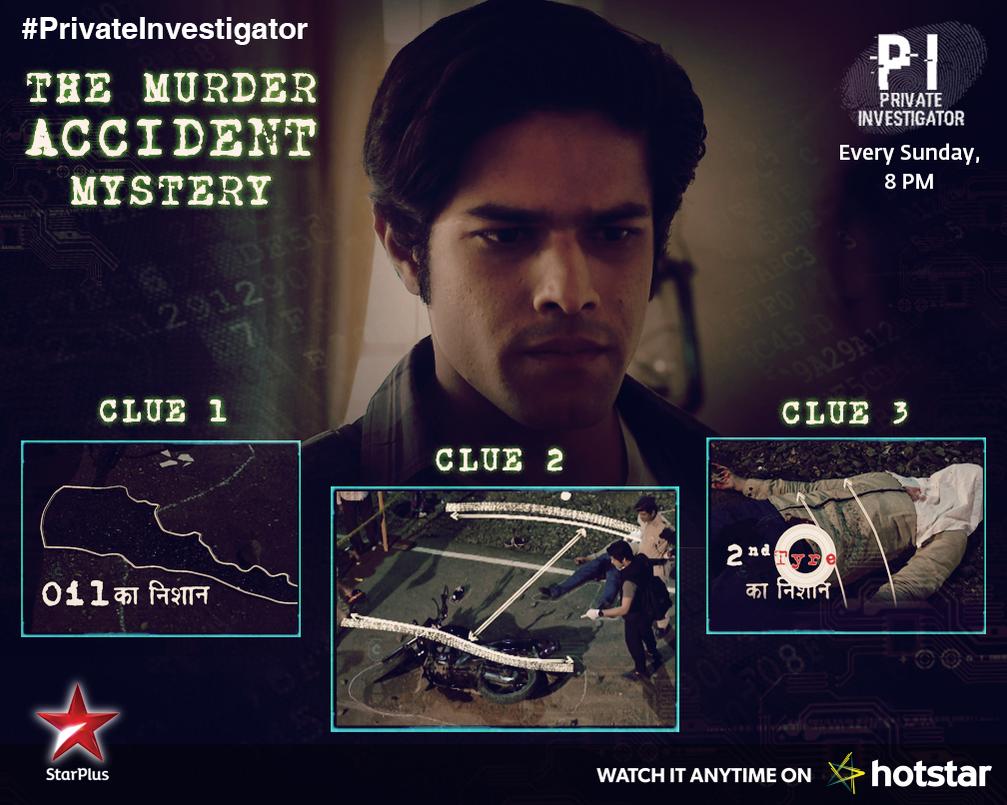 Raffe asks him mom when she was sleeping whether she loved his dad. She wakes up and carries tears but doesn’t reply to Raffe. This week’s story starts with Rajiv seen in a restroom and gets conscious after accepting a call and is present at a bar club. He looks at Ashwin, Bhaskar, and Aryan and speaks of showing them their position and also makes a remark at Ritika by suggesting she will lament one day. He leaves from there and is hit by a car from behind and falls down and gets injured and later dies. Raffe is taking dinner with his mom and friend Raghav. She compliments Raffe on having one good friend – Raghav. Raffe then gets a call from Tiwari but he disguises it as coming from Lucky in front of his mom. He attends it and Tiwari speaks of a case and a dead body is found and informs Raffe that if he solves he will buy him some packs of chocolates. Raghav/Raghu starts speaking that Lucky is pretty and Raffe takes him away but Raghu doesn’t wish to accompany him. Raffe goes alone to the crime scene and Tiwari is already there. He takes photos and asks Tiwari whether it is a hit and run case. Tiwari learns that the deceased is Rajiv Sharma, a 24 year old guy and constables pulls the leg of Raffe and informs there are no witnesses in hit and run case. Raffe takes the pic of the broken bike, shoe and spilled oil. The constable Hazare thinks it is hit and run case and Raffe finds one observation that the body is fallen at some distance parallel to the bike though the car hit Rajiv from behind. Moreover, there are tyre marks on his body which is different from one found on the road. Raffe thinks it is not hit and run case since Rajiv’s body was attacked with car another time and thus it is a murder.

Rajiv’s mom comes to the police station and speaks that her son is alive and he is just on the way. She speaks of speed dial numbers and talks about his friends. Raffe asks Tiwari to cooperate and to call Rajiv’s friends. The friends are on the way to reach police station and they discuss about Ashwin and Rajiv’s fight and suspects Ashwin’s role. They reach the police station and Ashwin is also there. He speaks about Rajiv’s teasing Ritika and thus he intervened and confronted him. Ritika couldn’t accept his point. Rajiv’s friends asks Ashwin why he initiated to take stand for her as there was no need. Ashwin starts speaking boldly about his identity and shows VIP nature and boasts about his dad. Tiwari shows his own confidence but soon that gets lowered as he gets a call from his seniors who asks him to leave Ashwin Rana. Tiwari is upset and Raffe wants Ashwin’s car search and Rajiv’s home address. Next day, Raffe goes with Lucky at a cafeteria and she shows some magic. She speaks of having Stage fright. He suggests that she needs to be focused and loves her magic and speaks of helping her. Raghav finds Raffe with Lucky and gets bit dejected and moves away. Raffe looks at him and tries to approach but in vain. Later, Raffe goes to Rajiv’s home and his mom speaks of her son to be alive and thinks he went away without informing. Raffe takes the pics of Rajiv’s room and finds maths equations and the world cup schedule. Soon, Rajiv’s mom come there and wants Raffe’s help in sending Ritika away from Rajiv’s life.

She also show her fears and Raffe learns that Rajiv used to hide in some upper closet when money lenders come to their home asking for their money. Later, Raffe comes home and gives Raghu some work on obtaining a password for social network. Raghav declines but then gets a crack in getting the password and sends it to Raffe. Raffe logins and finds the account of Ritika. Raffe tries to find clues and thinks Ritika and Rajiv had a break-up and Ashwin is the one who was meddling in their matters and also remembers Rajiv’s mother words about Ritika. Raffe goes to Ritika’s home and finds other friends there. He learns from Ritika that she had break-up with Rajiv long time ago. Raffe suggests that there was fight but no break-up. Raffe overhears that Rajiv had a fight with other friends too on the night of murder. Raffe takes the role of Sonu and drives the auto. Ritika comes to take Raffe’s Auto and after some distance her boyfriend joins. She speaks that Ashwin is the main suspect and speaks that Rajiv on that night have offered her many expensive gifts but she didn’t accept. She accepts her current BF offer to go to Australia. Raffe comes to Rajiv’s home and finds someone had done intrusion there and finds the window’s glass fallen on the floor outside. He learns that someone stole Rajiv’s home key from him to enter the home.

Tiwari gets cold and Raffe asks about CCTV footage of the club. He tells Tiwari to search Aryan’s car and he will go to find something. Raffe have earlier collected the lottery notes from Rajiv’s home and goes to meet Vijay. Vijay speaks that every person that plays lotttery has a particiular method and even Rajiv had one. Vijay also finds cricket betting and bookies code and rates in the document. Raffe gets detail of a big bookie from Vijay and he wants to approach that person. Vijay at first doesn’t want Raffe to go there but as he was insisting much dearly he takes him to the bookie Shobhan. Raffe speaks about Rajiv Sharma to Shobhan. Shobhan speaks of knowing Rajiv’s death and asks Raffe to approach Aryan to know anything about Rajiv. Raffe wonders and then Shobhan speaks that Aryan is his customer and just last week Rajiv took 3 lakhs loan from Aryan and took part in betting but lost. Shobhan thanks Vijay. Raffe goes to meet Aryan and shares about his 3 Lakh loan and asks whether he has killed his friend for that money. Aryan runs to meet Tiwari and speaks there of not doing any wrong. Aryan speaks about Rajiv’s words that night and he was speaking about winning crores and trying to impress Ritika but in vain. Aryan comes and asks Rajiv whether he won lottery and speaks of their earlier agreement on sharing the prize money. But Rajiv declines to share anything and just spoke of paying back his loan amount. When Rajiv left from there on his bike, he followed him and by mistake accidentally hit him from behind. Rajiv fell on the ground and he saw a car coming and ran from there. Tiwari asks what about the lottery ticket ?

Tiwari speaks to Aryan that he has taken the key from Rajiv and even went to his home to take the lottery ticket and even murder him. But Aryan swears on his mom on not doing any wrong. Tiwari is not convinced and speaks that he now needs to appear in court. Raffe thinks of some clues about Rajiv talking to Ritika about having crores and Vijay speaking about a method employed in playing lottery. Raffe finds a number written in Rajiv’s small notebook and goes to meet lottery ticket vendor Shukla. Shukla sees that number and speaks that is the jackpot no and is waiting for the person to come with the ticket he sold. Raffe was unable to validate that it was indeed Rajiv who bought the ticket. Raffe goes to Rajiv’s home and after some time Rajiv’s friend Bhaskar comes there and speaks of bringing calcium tablets for Rajiv’s mom. He meets her upon Raffe’s insistence. Raffe finds a new calcium bottle already there and understands about Bhaskar’s malicious role. He finds the Bhaskar had the key of Rajiv’s home thereby his role in coming to look for the ticket. Bhaskar is taken to police station and he opens up there on how he has attacked Rajiv after learning that he has won the lottery worth 7 Crores. He took the keys from him and went to his home to look for lottery ticket and even planted the blood-stained cloth in Aryan’s car. Raffe still has the question and wants to know where the lottery ticket is gone. Raffe and Tiwari searches Rajiv’s home very carefully. Raffe remembers the upper closet and climbs there and finally finds the lottery ticket. Raffe asks Tiwari to encash the lottery price and give the money to Rajiv’s mom. Raffe comes to meet Raghav and asks whether he has fallen in love with Lucky. He makes it clear to Raghav that such things should not hamper their friendship and they finally continue to remain great friends with smile on their faces.

Next Week: There is a beauty contest and even Lucky is participating in it. It turns out that one of the contest judges/organizer Rai sips a drink and dies and Raffe alongwith Tiwari gets another murder mystery to solve. Raffe carefully keeps an eye on the beauty contest proceedings and also on the contestants. Raffe gets input from Vijay. Will Raffe be able to solve the mystery ?