Bulbul’s Mehendi is next in the show. Bulbul is getting married and the nervousness is on Pragya. She thinks about Abhi and she hurries out of home. Bulbul gets puzzled by her behavior. All the ladies in Abhi’s home sit for having mehendi. Bulbul brings Pragya for the same, and Pragya’s focus is somewhere else. Pragya does all the arrangements. Pragya is tensed as her mission is to propose Abhi, so she wants to leave the house silently. It’s the sisters secret. Dadi stops Pragya for getting mehendi applied, but Bulbul makes work excuse and sends Pragya to meet Abhi. Bulbul asks Pragya to propose Abhi by singing any love song in Antakshari, but later asks her to say I love you to Abhi clearly. Will Pragya propose Abhi?

Jigar and Paridhi spend romantic moments. Jigar and Paridhi express their feelings to each other once again, and the romance is seen after long time in the show after much family problems. Jigar and Paridhi consummate the marriage. They have finally united, and starting a new life. Radha has failed after lots of tries. Radha’s sins have increased so much that Gopi decides to end her life, thus going to jail. The show is leading towards a leap again with new fresh actors donning the role of Meera, Totu and Molu. There will be many changes in the show, as the children will be returning from abroad after studies.

Suhani was trying to fix Soumya and Ankit for marriage, and she is shocked knowing Ankit has a girlfriend. Ankit lied to them about his girlfriend’s pregnancy and Suhani gets angry. Suhani meets Ankit’s girlfriend in the restaurant and comes to know everything. The girl tells Suhani how Ankit cheated her and now refusing to marry her after she got pregnant. Suhani gets worried for the girl and decides to make Ankit marry his girlfriend. Soumya gets free from Ankit’s proposal as Suhani stands against it now. She confides in Yuvraaj about Ankit’s truth. Soumya joins hands with Rags and Menka and plans to make Suhani leave the house.

Neil has been hurt by Devyaani’s rejection, and his track was taken back seat as the show was focusing on Anushka and Rajat’s annulment. Neil plans to hurt Devyaani by fooling her in love and then dumping her, in order to make her realize how it feels when someone fails in love. Neil asks his friend Bobby to get after Devyaani. Bobby starts flirting with Devyaani. He then teases Devyaani, and Neil makes a heroic entry to save Devyaani from Bobby. He makes an impact on Devyaani as her dreamy hero and acts more caring and loving, by which Devyaani starts falling for Neil. The twist comes as Bobby starts liking Devyaani genuinely and stands against Neil who is breaking Devyaani’s heart. Bobby sees Devyaani responding to Neil more, and turns negative. Bobby then tries exposing Neil’s truth to Devyaani, making Devyaani hate Neil after knowing his revenge plan.

Its Akshara’s Godh Bharai/baby shower function. Maheshwari and Singhania families get together, along with Nandini and Rashmi’s families. Everyone make the function grand. They celebrate the function in modern way, as this time kids have given the idea. Naksh arranges the gifts and also the cradle for the baby. Everyone light the candles and pray for the baby. Rukmani was annoyed seeing Muskaan and Alok, but Devyaani has given the nod for their marriage.

Anandi gets sad as she misses Shiv after her delivery, realizing Shiv was waiting for the babies and could not be lucky to meet them. Anandi sings a lullaby for the babies. She does her duties being a mother and father for the babies, and sings the lullaby about their father is close to them.

Manik and Nandini’s love story will get a new angle in the form of the new entry in the show. A charming and handsome hunk will be seen entering the SPACE Academy as a student, and all girls will be falling for him, whereas he will be falling for Nandini. He will be having a good hold on music and give competition to the best students.

Sahir is recovering from bullet attack injury and is at home getting treatment and on glucose intake. It turns out that someone mixes poison in the glucose and Aarzoo comes to know of it. She hurriedly begins to take out the poison from Sahir’s veins in order to save his life. Sahir sees her efforts and they come closer for brief time and soon both fell unconscious. Zaki comes home and finds them in that condition and tries to help them. Kurti Apa and Zeenat are partners in crime and attacking in veiled manner. Sahir and Aarzoo are coming closer and the strength of their love is tested in such hard time. Will Kurti Apa and Zeenat’s role in attack come out in open ? 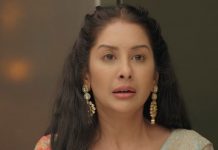