The weekly show Airlines is going to bid adieu with its last episode telecast on 1st February 2015. The show’s format is finite and 20th Episode is the last one though initially 26 Episodes were thought. The show traces the journey of First Flight officer Ananya Rawat and Pilot Aakash Saluja with INDE Airlines. The plot was layered with a love story weaved between Aakash and Ananya and also the intelligence angle with the revelation of captain Aakash being an intelligence officer working on national security. Rohit Mafatlal made his entry on the show as the owner of INDE Airlines who is suave and charmer and has grown admiration  and feelings for Ananya Rawat and she is thankful to him. The show highlighted the challenges faced by a woman pilot when she works in a male dominated profession and men’s perspective, bias and even support has been shown. For instance, pilots Rathod and Karan took part in gender stereotyping to demean Ananya and she got immense support from captain Aakash. Rathod had a grey character towards women since he had saluted once Ananya’s bravery and presence of mind.

Some of the topics that the show covered are – Overcoming crisis situation on-board: Premature baby birth; human trafficking by concealing and faking identities; smuggling; Engine failure and incident response – Stopping Thrust Pressure services to land Airlines; Using Experience to land in Foggy and dark situation [Aakash leading by example] and Facing and winning in tough situations while away: Hostage crisis at Airport, Drug Racket attacks in Goa. It also exhibited family ties specially the bond between Ananya and her family – shefali, mom, grandpa and moreover on the relationships between pilots and crew – airhostess, for instance Natasha’s fondness for Aakash. The intelligence angle dvelved into human aspects since Aakash was ready to forego his love for Ananya for her safety and listening to his senior bosses and protocol got the highest priority. As the show is coming to end, the intelligence is working hard to get to the hired killer who has killed Vijay Mafatlal and his doctor and is linked to project ID 2877. Rohit Mafatlal is ambitious and self-driven and it has to be seen what’s his role pans out in that secret project which is detrimental to national security. Moreover, all clues point out INDE Airlines has connection with it. Ananya is oblivious of the intelligence dimension and even not aware of Aakash dual role of an intelligence officer.

Will Aakash and his intelligence team get to the attackers – hired killer and people behind that secret project ? Is there going to be renewal of Ananya and Aakash’s brewing love and a happy ending in their love story ? What will be the biggest revelation with INDE Airlines and Rohit Mafatlal if any ? Stay tuned to Airlines’s last episode on Star Plus this Sunday @ 9 PM.  We wish the best to all the cast and team of Airlines and special mention to the lead actors – Yudhishtir [Captain Aakash] and Tulip Joshi [Ananya Rawat] in their future work endeavors.

Tomorrow's the last episode of #Airlines on @StarPlus ! It's been an amazing journey! thanks 2all U wonderful people 4watching & supporting 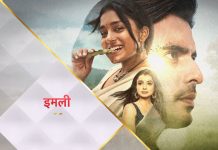