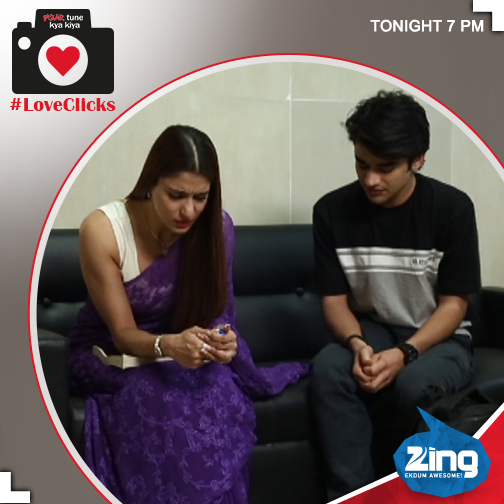 Meiyang Chang (the host) speaks that its easy to judge others but in love there is unconditional and no prejudice aspect. Today’s story is of Rohit and Aparna and there was no bias or judgement between them but ony love. The story starts with Rohit’s mom trying hard to wake him up. He wakes up and finds his friends waiting outside for him with the intention to play cricket. His mom asks him to first take breakfast and he hurriedly takes it. He leaves to play cricket with his friends. He was playing cricket and soon finds a young woman coming to his locality with her luggage. He looks at her and gets distracted from cricket and gets bowled. Rohit’s friends are also awe of the young woman and she is asking some man about her husband. Moreover, suggests of not knowing his whereabouts. Rohit leaves his friends and goes to his home. His dad asks what about his plans after 12th standard and he replies on playing cricket and taking it to professional level. He speaks of not having interest in Maths and Economics and gets more scolding by his father. His dad asks from where he will get funds for coaching and he brings out his petty savings pot.

Aparna settles down in her home and looks at a diary and cries. [Jhalke… Pal song plays]. Next day, Rohit is at his home and finds Aparna leaving her home. He looks at her with earnest eyes and follows her. She takes a bus and he also takes it and looks at her. After some distance, she drops down and he follows her. [Roomani Ankhon Ki Jaana Ghazal hain tune plays] Later, he comes home and reminisces moments with her and smiles. Meiyang (the host) speaks that Rohit wants to know more about Aparna and he got more interested. She was a beautiful individual for him.

Rohit gets introduced to Aparna by his mom and he learns that she is an economics teacher. Later, Rohit’s class 12th results are declared and he successfully clears the exam with 2nd division. Sooner then, Aparna comes to his home and asks his mom Neelam about some electrician for repairing the fan. She asks Rohit about his future studies and also speaks about her college. His father wants him to take graduate studies and she also motivates Rohit in pursuing it while cricket can be followed as well. Rohit decides to pursue futher studies and his father gets happy. Later, Rohit meets Aparna and informs her of going to the college for his admission. They take the same bus and he looks at her and she notices once. At the college, he finds Aparna to be speaking on phone and also worried on some matter. He comes to her and speaks of getting admission in the college. He asks her about going to canteen and they start eating together. He learns that she is from a town in Kolkata and have came there with her husband some months ago. She came to Mumbai with high aspirations and her husband got a job and after 2 days it turned out that her husband went missing. She tried to find him at office and even complaint to police but didn’t got any help. He asks her to not worry and speaks of being there for her.

Next day, she was teaching in her class and Rohit is one of the students. One of the students – a fat fellow throws a paper plane at her and also depicted her personality on it. She gets annoyed and threatens on restigating the one who will find guility and leaves. The fat fellow laughs on his mischieve. To take some kind of revenge, Rohit puts a paper with depiction of the same fat student at several places in the college. The fat fellow gets worried with his funny sketch and Rohit pulls his leg. Later, he comes to Aparna and finds her crying. She speaks of living alone in a big city and how people make taunts. She also speaks of students’ misbehavior and Rohit suggests that the same student will come. The same fat fellow comes and apologizes to Aparna. She compliments Rohit by calling him a good guy. At her home, Aparna gets cry after seeing her husband’s shirt. She continues with her normal routine of teaching duties. Rohit attends her class and gets dreamy [Tu Hi To Meri Dost Hain song plays]. She brings him out of his dream. They spend more time together and he gets few photos of her husband and hopes on getting some lead. He puts pamplets of Aparna’s husband photos at several places and also on public transport.

Meiyang (the host) speaks that Rohit wants to see Aparna happy and get rid of her problems and she found a friend in Rohit.

Rohit speaks of putting an Ad in the newspaper and hopes her husband will come after seeing it. She gets glad and later meets the college head regarding a permanent teaching job. He speaks of not giving permanent job easily and tries to talk about physical favors. She leaves from there and informs Rohit on the principal’s behavior who tried to touch her hand. Rohit speaks that the principal has done wrong and he wants her to complain to the trustee and she does it. The trustee speaks that the principal has rejected her complaint and informs her that she needs to resign as her contract is ended. He doesn’t listen to her. She meets Rohit and is angry with him since she lost her job. Moreover, her problems get more as she was unable to pay her house rent and her landlord gave her one day to pay the dues. Meiyang (the host) speaks that Rohit wanted to do good for Aparna but it turned out the other way and she was getting into more problems.

In the evening, the same landlord man comes drunk to her home and speaks that the rent is 20,000 rupees. In drunken mode, he speaks of special offer and wants to spend time with her and doesn’t worry about money. He tries forcibly to come close to her. Rohit sees the man approaching Aparna with bad intentions and goes to inform the man’s wife. She comes there and confronts Aparna by taunting that she was trying to trap her husband. Rohit tries to defend Aparna but the man’s wife thinks that even he is under the influence of her. Rohit’s mom Neelam starts blaming Aparna and even questions her marriage. Aparna is thrown out by the landlord’s wife and even the belongings. Rohit was forced to speak out that he loves Aparna to his mom and gets slap. He cries while staying in his room and looks at his pet savings pot. He takes out the money from it and manages to escape from his home. He comes to meet Aparna who was standing alone and crying. He apologizes to her for his parents behavior and she speaks of not wanting to stay in the city even for a day. He speaks of not stopping her but has brought the money which she can use for tickets. In teary voice, she speaks of his help and suggests of not forgetting his immense favors. He asks whether she will not remember his favorite student. She replies of remembering him as a man and not just a student who has helped her without worrying about the society.

Next morning as she was about to depart, her husband finally turns up and she gets glad. She asks him about his whereabouts and he speaks of a long story and survived because of her love. He speaks of getting kidnapped and got tortured for 3 months and then released as they didn’t got any evidence. She hugs her husband. Rohit is about to leave but she stops him and showers a kiss. He remembers some nice moments he shared with her [Jaise Mile Ajnabi…Darmiyan song plays]. He speaks that in love there is need of love and its not important to be together. She leaves with her husband. The story ends on that note.

Meiyang speaks that Rohit has given sacrifice and even challenged his family. But in the end, he understood about love and the need to have love and not necessarily be together. He asks people to share their views on what they would have done if they were in the place of Rohit and Aparna.