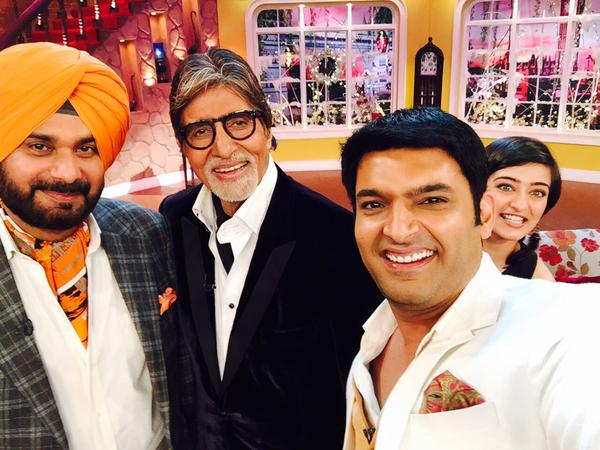 Guest on the show: Actor and Stars: Amitabh Bachchan, Dhanush, Akshara Haasan, and R. Balki – the Team of the movie Shamitabh

Kapil starts the show and speaks about the value of voice and cites it as God’s gift. He suggests that many times we recognize the person by his/her voice and also know who has good music capability (sur) and the ones having stomach upset invoking laughter. He gives an example of the role of Gabbar given to late actor Amjad Khan. He asks what-if the same role was given to late actor Kishore Kumar. Kapil then enacts Gabbar’s dialogue with voice of Kishore Kumar. He speaks of the combination who are guests on his show. First, he welcomes Dhanush and greets him. Dhanush shows his expressions while Sr. Bachchan voice is heard is heard in background and he also greets Kapil in Big B’s voice. Even Siddhu shows his expressions on Big B’s voice. Kapil welcomes Akshara Hassan and even on her expressions Big B’s voice is heard. Sr. Bachchan marks his entry on the Piddly song and gets a standing ovation from Siddhu and audience.

Kapil wants to speak in English with Dhanush and puts the onus on him to understand. He asks Dhanush whether he felt on getting choked down by carrying the big voice of Big B. Dhanush replies that it is a logical question and then speaks in english of having fear. Big B translates Kapil’s first question to Dhanush in english and also does the translation for Akshara. Sr. Bachchan compliments when Kapil speaks in english with Akshara. Kapil asks Akashara, How does it feel to work in her debut movie with Big B? She speaks of feeling honored and Sr. Bachchan humorously asks her to not add feminine to every thing and corrects her misake in hindi word. Sooner then, Daadi makes an entry and comes on stage in drunken mode. She comes to Big B and speaks of drinking only when remembering him. She speaks SRK’s movie dialogue of drinking to keep his memory and Bittu reminds her of using SRK dialogue instead of Big B. She counters by saying that SRK copies Big B’s movies which invokes laughter on Big B’s face. Bittu makes a taunt at Daadi and speaks an instance when she puts her tongue in a beer bottle and it got stucked. It turned circular and Bittu suggests on lighter note that she was speaking like Bengali for 3 months invoking laughter. Bittu asks Daadi to leave and she indirectly speaks about what she needs before leaving. She begs Big B for the kiss [Shagun ki Pappi] and gets a kiss from him. She kisses Balki and leaves.

On the show, there are more fun moments with Gutthi, Bittu’s Naani. Gutthi comes and follows the step of Dhanush on the Ishq E Phillum song and dances with much passion and energy and even goes beneath his legs and comes out in one scene. In the end, Dhanush had to accept his defeat as Gutthi’s comical antics is one of a kind. Few women from the audience comes on stage and one of them speaks about Big B’s dialogue in the movie Sholay where he spoke to Jaya Bachchan who was playing the actress. The dialogue was – what happened last night will not happen again and returns the keys to her. Big B speaks that the dialogue was very strange and pulls the leg of the lady. Kapil and Sr. Bachchan perform on the piddly song with toilet seats brought on stage. The show ends with Bittu’s family grooving with Sr. Bachchan on the piddly song. Stay tuned to Comedy Nights this Sunday @ 10 PM on Colors.

* Shamitabh movie got released on 6th February 2015. The plot’s theme is how one is incomplete without the other and when both are together the result is amazing. Sr. Bachchan’s voice is superimposed on Dhanush’s character & expressions in the movie. It also deals with battles of ego between two individuals. Sr. Bachchan portrays the character of Amitabh Sinha/Shamitabh, Dhanush as Daanish/Shamitabh and Akshara Haasan as Akshara Pandey. Read more at its Wikipedia page.