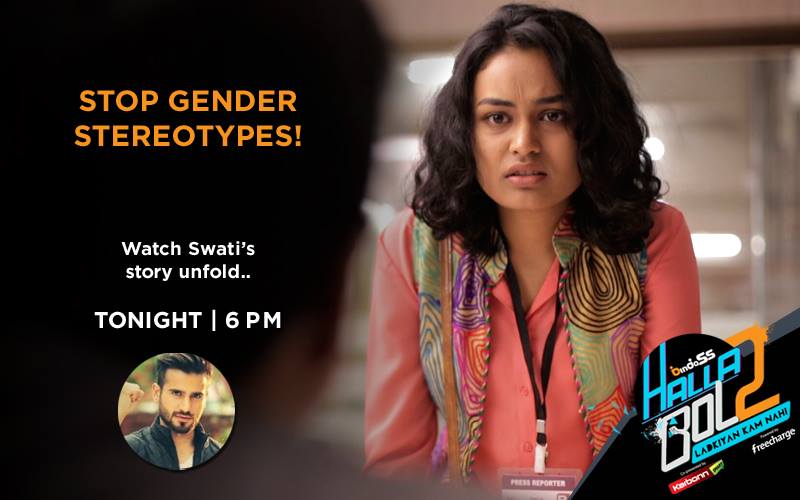 Karan Tacker (the host) speaks of journalists and the field where you need to have passion and aslo be fearless. Whether girls and boys are different in such a field and why there is bias between them. Swati faced difficulties in her profession and have to fight back. The story starts with a TV anchor Arvind Bala – the chief of a TV news channel presenting a program with the message The Real Side. The story is set in New Delhi 2012. A young girl Swati speaks to her father and is seen at a TV news channel and soon attends a meeting with Arvind Bala. She also meets the network head Aveek Tripathi who is also senior political coverage head. She compliments Aveek. Arvind speaks that her blog is amateurish and Aveek compliments her. She compliments Arvind’s work. Aveek asks Swati what she wants to cover. She replies crime. Arvind makes taunt at Swati and asks whether she has seen crime. He speaks then the crime work is very dangerous and even life can go away. Swati suggests that even boys’ life can go away. She changes her tone and agrees to work if not on crime. Arvind speaks that Swati needs 1 month training and then she can get full job. Arvind thinks that Swati is very desperate to work for them and thinks it is not good.

Swati comes to her work and meets another intern Nikita. She speaks of coming from Kulu and they begin to talk more. Moreover, decides to share the appt with Nikita. The story moves forward by one month. She gets the job to cover fashion and speaks to Nikita on how Arvind has rejected her interest to cover Crime. She starts her first assignment and covers a party. They find Aveek and he offers them drinks. Nikita declines to accept drinks and he takes Swati for dance. He tries to come close and speaks of either giving wings to her career or destroying her career. She is able to move away from him. He comes then to Nikita and spikes her drink. She is searching for Swati but he suggests her to drink and then dance. Nikita gets intoxicated and not in her full senses during the dance with Aveek. As Nikita was approaching Aveek, he takes Nikita away and tries to physically abuse her at the parking place. After seeing Swati coming, he runs away from there. Swati takes care of Nikita and also a doctor comes to their home. Next day, Swati comes to Arvind and informs him on how Aveek had tried to sexually assault Nikita last night at the party scene. He speaks that Aveek is the network head and also a reputed media personality. Swati opens-up more and suggests that he even tried to come close to her but she declined so he then went to Nikita.

Aveek is called and meets Arvind. He cooks up a story and suggests that Swati was very desperate to cover crime and wants to do anything for it. He asks Arvind why he will risk his reputation and work of several years. He calls Swati and speaks that she has done a bad thing just to get ahead in her work and shows his annoyance and wants to fire her. But Aveeks steps in and asks Arvind to let her go and if they fire her at that moment she will create more drama and speaks of taking care of it. Later, in the evening Nikita speaks of not knowing what happened with Aveek since she was only dancing. Swati remembers how Aveek tried to come close to her and his attempt to assault Nikita. She gets thinking and writes on her web blog about how her friend Nikita was about to get physically assaulted by one of the employees of P16 news channel. She urge the readers to put pressure on the channel in uncovering the culprit so that he would be able to stop his lusty behavior.

Next morning, Swati wakes up and finds Nikita to not be present. She comes to her office and soon gets called by Arvind who comes to know of her web blog article about Nikita’s incident. He speaks that without proof she published the article and has not taken care of journalistic ethics. He still believes she did such thing so as to satisfy her crime coverage interest. He asks her to take down that article and also the allegation. She suggests that even he doesn’t have the proof. He speaks of having proof and calls Nikita and Aveek to his cabin. Nikita comes there and speaks that Swati is speaking a fake story. After hearing it, Arvind fires her while Aveek gets shrewd smile on his face. Swati gets dejected and cries at her home. Nikita comes home and she wants to talk and asks why she lied. Swati speaks of finding solution to the problem if any but Nikita locks herself in a room and doesn’t want to talk to her. Swati learns that Nikita is scared of Aveek. She goes ahead to write more on her blog and writes about the saying that if one lie is said 100 times, then people think it as truth. She writes that truth lies in power’s hands.

She suggests in her article that the P16 news is trying to defend the accused and she vows to get to the culprit and proof his crime. Later, she watches the news and finds Arvind and Aveek to be part of their program. Aveek wants to say the truth from his side and speaks that new journos think that by writing blogs and by putting allegations to become popular. He says that allegations putforth by Swati in her blog doesn’t hold at all since she doesn’t have any proof. She gets shocked and soon gets a message from Nikita that her sister is coming to stay and even if they stay seperately it will be good for her job as well. Swati cries in her room profusely. Karan (the host) speaks that Swati’s mistake was that she has put allegations against a powerful man. She was left alone and didn’t got support and even the truth took a back seat. The system was not letting her to express the view point.

She moves to a new appt and reminsces her first job working days, Aveek’s actions during the party scene, Nikita not opening up and Aveek suggests that all allegations are baseless. Later, she comes to the party scene and speaks to the manager there asking for the CCTV footage. She requests him dearly and it turns out that the manager calls Aveek and informs about Swati coming there asking for proofs. Sooner then, Aveek comes there and speaks of knowing before hand that she will come there asking for the evidence. He speaks that the evidence is deleted and intidimate her. He speaks of giving last chance and asks her to go back to Kulu. She comes home and speaks of not having any evidence. She recollects her own camera man Ravi might have some evidence. She comes to meet Ravi and asks him for the footage. He speaks of company’s policy and thus cannot give her the footage. She quietly takes out his office badge and gets entry and finds the footage of Aveek trying to forcefully come close to Nikita.

Swati convinces Nikita to say the truth after showing her the footage. Nikita spills the beans and speaks on getting threatened from Aveek who spoke on destroying her career if she speaks the truth. Arvind Bala comes with his program on the channel and the topic is How Power manipulates situation. Aveek and women minister and politician are part of the panel. Arvind asks the minister Deepti first. She speaks that the people need to be fearless to expose powerful people. Another lady Jayanti speaks of applying strict regulations on the offenders. Aveek agrees with the women and think that the offenders should be arrested. Arvind shows a video of Aveek trying forcefully to come close to Nikita. Aveek asks Arvind to close down the footage. He replies that Aveek has indeed has done wrong at the party scene and when Swati – a journalist tried to speak about his crime she was shunned. Aveek suggests the video doesn’t give any proof and Arvind then plays the Nikita’s audio of her confession exposing Aveek. Swati and Nikita comes there and slaps Aveek and thus saying Halla Bol. He threatens on destroying both of them and Swati speaks of the power of media and truth. He leaves from there. Swati thanks Arvind and he speaks of taking care of the matter. He also reminds Swati on the interview and speaks on learning from her and she can start working as the crime reporter. Swati works as the crime reporter and finds much happiness. The story ends on that note.

Karan (the host) speaks that Swati hold the journalistic spirit and he salutes Swati and other journalists who are fearless and fight the bias and prove their worth in combating gender stereotyping. He signs off by asking the girls to have dreams and to not be quiet since they are not lesser than anyone [Ladkiyan Kam Nahi in hindi].

Info on Cast:
* Swati is portrayed by actress Sheetal Singh
– Sheetal was born on November 22, 1989 in Lucknow, India.
– She made TV debut with Channel V’s Paanch: Five Wrongs make a Right and portrayed the lead role of Roshni [2014].
– Worked as flight stewardess for brief time, Went to St. Teresa’s College and Central Academy and University of Mumbai for her studies.
– Attended Circle in the Square Theatre School, the very well reputed acting school in New York city and studied acting.

* Nikita is portrayed by actress Isha Chawla
– She recently portrayed the role of Taniya in PTKK’s Season 2 Episode 6 aired on 3rd October 2014.