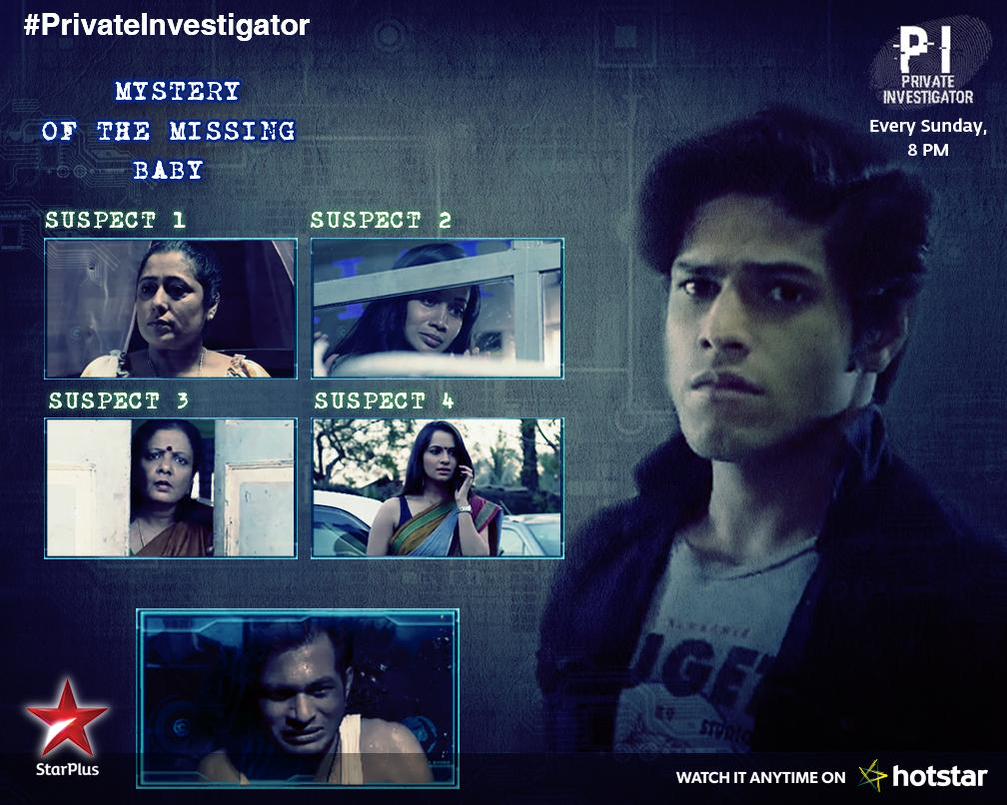 A young couple is murdered in broad daylight at a hotel. Raffe at his end has taken Sonu to the hospital and informs him that he got tonsils. Raffe finds a lady there telling the nurse that her baby is lost. Raffe finds the lady’s family inquiring about the lost baby and it turns out that the baby was going to be adopted. Tiwari comes to the crime murder scene and identies the couple to be Mr. Dholakia and Ms. Dwivedi. And the lady used to work at the hospital and goes to find info there. Raffe finds Tiwari at the same hospital and the lady Seema who was feeling helpless on losing her baby comes to meet Tiwari. Tiwari directs Raffe to solve the missing baby’s mystery. Raffe learns that the baby was stolen last night and also Seema is not married. She doesn’t wish to give the baby to anyone and talks about NGO worker Shefali who was trying to take the baby.

Raffe wonders how the baby is stolen as there is only one door. He finds CCTV camera installed in the room. Tiwari gets amused with the old songs and meets the head nurse Gomez and informs about Ranjana Dwivedi’s murder. She gets shocked and speaks about Ranjana’s husband Satish who came drunk looking for her and he spoke to her that Ranjana is having an affair with some man. Tiwari speaks of resolving the case. Raffe looks at the CCTV footage and finds a veiled woman in Burqa. He finds a lady Shefali angry with some personnel on the lost baby and talks to the NRI couple who was going to adopt the baby. Later, Raghu learns that 4 babies were stolen in few weeks at the Savitri hospital. Raghu carries the role of a courier boy and reaches the NRI Couple – Vatsala Zaveri’s (the lady) home. He puts the camera inside the home and manages to run away. Raghu finds more leads that there were four girls – Zeenat, Niloufer, Naaz and Zarina  in the ward during the night when the baby was stolen. Raffe then recollects that the baby was under Burqa – false belly. He wants to know the woman behind that Burqa and speaks of having Mama time. He doesn’t want to deceive his mom and spends time with her outside at the park. A lady comes and calls Raffe’s mom as Nivedita. Raffe’s mom asks him to bring some juice so as to excuse him from there. She gets nervous after meeting the friend and Raffe manages to take the photo of that lady. He gets the paper which she threw with the lady’s phone info.

Raffe reaches the hospital and comes to talk to Seema – the lady whom he is helping out. He asks her to not cut her veins and speaks of finding her baby and he is trying his best. She speaks of going back to Bulandshaher after getting discharge tomorrow. He asks her to stay back in Mumbai and study and knows she is a bright student. Sonu marks his entry and signals Raffe about Tiwari as he couldn’t speak. Tiwari mimics Sonu and Raffe talks about the Ranjana murder case. He informs Raffe that Ranjana’s husband is on the run and also supports Seema. Later, in the evening Raffe gets in his zone and arranges the clues and comes to conclusion that Ranjana was the Burqa clad woman who has stolen the baby after finding bangles matching, and later she got murdered. Raffe speaks that the main kidnapper has killed Ranjana and they need to find. Raghu, Raffe and Tiwari look at the footage of Vatsala’s Zaveri home and they learn that Shefali took 20 Lakhs from the Zaveri’s and gave the baby to someone else. Raffe goes to meet Shefali who runs a NGO. She speaks of supporting orphans and find parents for them. Sooner then, she gets a call and is going to some place in 20 mins. Raffe and Raghu follow her and she reaches some home which also has a security guard. Raffe overhears Shefali speaking to someone that soon doctor will come to see the problem. Raffe dons the role of a doctor’s assistant and makes his entry inside the home.

He finds many pregnant ladies there. Just then, Shefali calls the lady there as she forgot her glasses. The lady informs that the doctor has reached there and Shefali wonders how that is possible. She instructs the lady to call the security and the guard confronts Raffe but Raghu comes to the rescue. Shefali is caught and taken for interrogation with Tiwari. She admits on arranging parents for girl child, unmarried girls giving birth. Tiwari asks Shefali about the missing baby and she speaks of not having any idea since her work is accountable and legal. She speaks that Ranjana used to bring babies for her. After seeing Tiwari’s gun, she gets more nervous and speaks of not knowing the baby. Next day, Tiwari is puzzled to not get anything from Shefali. Tiwari learns about Ranjana’s husband murder and reaches the crime scene. Raffe finds a phone and also a bottle with its cap has a small hole that of syringe. Raffe calls a phone number from the phone which turns out to be of Savitri hospital. He understood on how Satish – Ranjana’s husband got murdered by someone from the hospital. He first got info of Ranjana’s hotel address and once he killed her the main plotter has killed him. Raffe, Tiwari and Raghu reach the hospital and meets the head nurse Gomez. Raffe gets a clue and wonders about Zarina, Niloufer, Naaz, Zeenat. They move from the hospital and reach nurse Gomez’s home. There are some men who come in her home and speaks to the police that she is not the thief. Raffe gets the idea and comes with the mosquito repellant spray and speaks that she is the thief and she stole it because she needs the baby. She stops Raffe and shows him the baby.

Nurse Gomez gets arrested and Raffe speaks on how Ranjana used to work for her by stealing babies and handing over to client of Shefali. But this time such thing doesn’t happen. Gomez speaks of needing the baby for her old age but Ranjana was asking for lots of money to steal. Once she stole the baby, Gomez asks her to go and enjoy with her boyfriend at hotel Milan. She then called Satish- Ranjana’s husband and spoke about her affair and stay at the hotel.  He went ahead to do the killing. Seema gives the baby to the NRI lady – Vatsala. She leaves from there and speaks of studing more in Mumbai. Raffe come to some place and there is a reunion. He meets his mom and asks why the lady was calling her Nivedita though she is Anita. He asks her to trust him and she replies on trusting him. She speaks of doing for both of them and knows that he is intelligent and has grown-up. Raffe gets teary eyed but she asks him to be patient and has to believe and trust her in all cirumstances. She compliments Raffe that even Mumbai police is saluting his intelligence and speaks of knowing all. She suggests that its fine if he wants to become a detective but he should keep the promise of not asking about their past and they mutually agree on it via  a deal.

Next Week: An auto driver Majid is murdered and the killer is murdering the drivers of particular series of autos. Sonu turns out to be the next target and Raffe goes all out to save his friend.