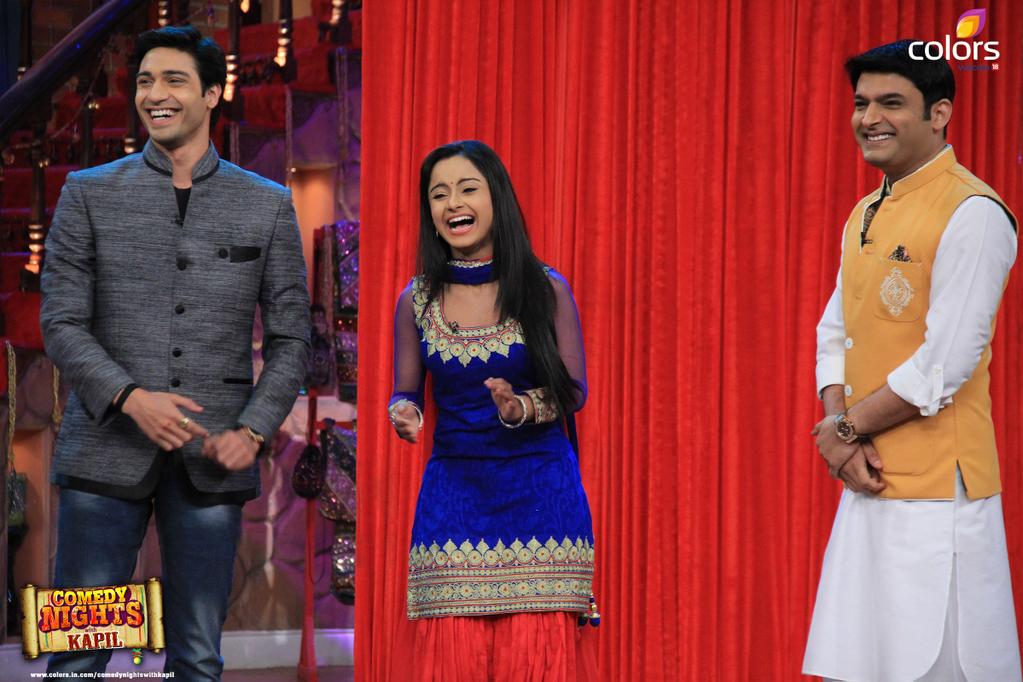 Kapil welcomes all on the occasion of Maha Shivratri and humorously talks about knowledge and award. He welcomes Anushka and Rajat from Shastri Sisters on his show. He asks Anu on how boys get confused to see four sisters and whom they would choose from them. Siddhu cracks a joke with her. Kapil asks Rajat why he is interested in Anu and not other sisters. Rajat replies that Anu is the most loved daughter of Shastri ji and Kapil counters with a joke that Rajat is more interested in having good bond with his father-in law than his wife invoking a laughter. Kapil goes ahead to talk on how girls share a lot with sisters and even talk at all time. On a lighter note, he suggests that a girl even talks to her sister even during her Suhaag Raat [wedding night] bringing laughter. Next, Kapil welcomes Chakor from Udaan on his show. Chakor comes and hugs Kapil. She goes ahead to sit on the sofa and asks Kapil why is he quiet and not asking questions. Siddhu speaks about determination to fly high in fulfilling dreams. Chakor replies to Siddhu that she flies with her determination and cites determination as wings and makes it clear on not flying with her heart. Everyone applauds her inspiring words. She plays a trick with Kapil and goes to sit near the tree and again come back to the sofa thereby pulls the leg of Kapil. Furthermore, she makes a funny taunt at Siddhu by suggesting he has eaten half his answer when he spoke about determination.

Later, Kapil welcomes Samrat Ashok from Ashoka. Ashoka comes with a sword and talks about bringing it there to see people don’t talk a lot otherwise he will use his sword. After that dig, Kapil humorusly asks him to wear Banyan and come invoking laughter. Kapil also welcomes Anandi, Ganga and Roli on his show. He pulls the leg of Roli by suggesting she is very young and did so much of acting and thinks she can take retirement in the next few years bringing laughter. Also,  Swara and Ragini – sister characters of upcoming show comes on stage and drive a bicycle and they have good time on the show. Coming to Chakor and Kapil, he pulls her leg and she asks whether she is his Nani (grandmom). He replies that she is much more that his Nani and suggests even his Nani would be quiet in her presence invoking laughter. Later, Kapil talks about The Thirsty Crow and the pot/pitcher story and asks Chakor whether she knows about it. Chakor replies on knowing the story during her Upper KG studies. Kapil wants to depict the story on his show. He first presents the crow and Rajiv Takur comes dressed as the crow while driving a bicycle and very relaxed. Daadi is also seen with building clay pots [Matkas in Hindi].

Rajiv aka the crow taunts at her lethargic speed in making the pot. He wants to purchase a pot so that he can work on his story – thirsty crow drinking water from a pot. She declines his 10 Rupees offer for the pot. But he insists her to build the pot so that he can drink the water fast. Kapil brings the pot for the crow who speaks of having less water and thinks of not able to retrieve after throwing pebbles. He instead wants to drink a cold drink by buying it and then runs from there after breaking the pot. The show ends on a happy note. Stay tuned to Comedy Nights this Sunday @ 10 PM.

* We (TellyReviews) take this opportunity to congratulate and wish both amazing actors – Spandan and Siddharth the very best in their acting careers ahead.

* Maha Shivratri is a Hindu festival celebrated every year in reverence of Lord Shiva. On this day Shiva was married to Parvati. It is going to be celebrated on 17th February 2015. Read more at its Wikipedia page

* The crow and the pitcher story highlights the value of persistence, thoughtfulness and the ability to find a way when you have the will. Read more about the fable at its Wikipedia page