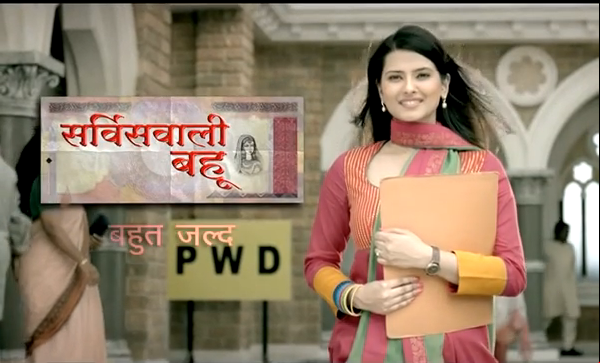 Service Wali Bahu is the latest offering from Zee TV. The story showcases the journey of Payal – an engineer and working girl and her married life where her in-laws expect to gain financial dividend with her work in office. They regard her as service wali Bahu but what it actually meant – respect of the house or another name for dowry. Payal works as an engineer in the PWD department and takes care of her family and is loved much by her parents and sister. She shines in taking care of the responsibilities and even bought a car for her family. But her parents also wants her to settle down in marriage. A marriage proposal comes and her family meets the to-be groom’s family. The groom’s family wishes and even prays that their daughter-in law does service and earns money to support them and doesn’t care whether she knows cooking or household chores. Both families meet to discuss the proposal and she attends after coming from work. The boy’s name is Dev and his father finds Payal and her family to be suitable for his son at the onset and tries to impress her father. Payal  greets them and soon Dev’s elder brother opens-up on what they really want from a daughter-in law and puts focus on her work and earnings.

Moreover, he tries to suggest she will have a big heart since she works and earns. Payal gets nervous to hear such comment and soon Dev’s father tries to downplay his son’s argument. Dev’s brother then twists his words and suggests that she needs to manage both house and family. It turns out to be the case that even Dev is also interested in having a working wife and carries an introvert personality. After the proposal meet-up, Payal contemplates about Dev’s family and wonders whether they are playing a game of dowry in the garb of asking for service wali Bahu. Payal is a perfect match for them as she fits perfectly in their wishes of wanting a working daughter-in law. How does Payal manage her work and life balance post marriage is an integral question, and moreover how she overcomes the challenges/tribulations after being stereotyped by her in-laws only for money. The show starts from 23rd February 2015 and is telecast from Monday to Saturday @ 6:30 PM.