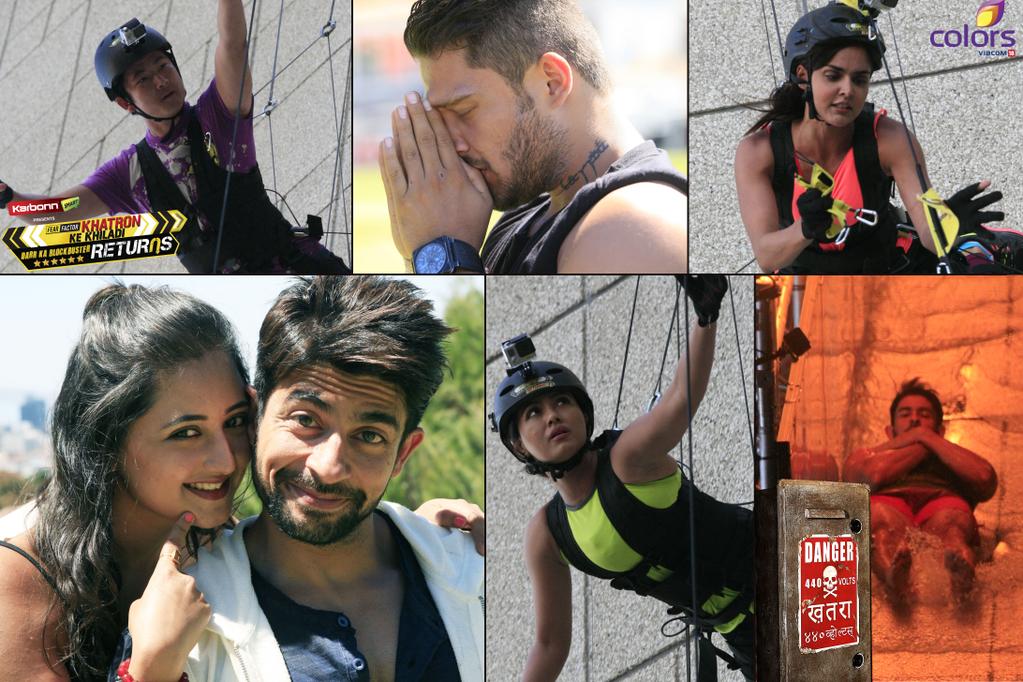 Khatron Ke Khiladi  6 starts with some fun banter with role play of the classic movie Sholay being enacted. Ashish took the role of Gabbar, Hussain as one of his men, and Rohit as Veeru [that of Dharmendra], and Basanti’s role was given to Padma [Rohit’s Team girl]. There is Filmy week special.

1st STUNT: Dawat E Hiss [SNAKES], CPUT Rugby ground, Cape Town
There is a standstill car with 100 snakes and the stunt scene was inspired from a scene from classic movie Bombay to Goa. The contestants need to take out 9 white snakes [1pt] and put them in a sack. After doing so, 1 python [2pt] needs to be put around the neck to complete the stunt. It has to be done in 8 mins.
– Sana decides the ordering by being compelled to hold a mouse in her hand. She shouts much while everyone have a laugh.

* Siddharth Bhardwaj
Siddharth shivers after seeing the snakes and cautiously puts three snakes in the sack one after another. He laments on coming on show due to worry and manages to put few more of them. He completes his stunt by putting the python on his leg and finally puts it around his neck. He took 8 snakes and 1 python to earn 10 pts. He clocked 7 min 43 seconds.

* Asha Negi
She removes her blindfold and puts couple of snakes at the first go and shows proactive approach & agility. She stands up and finds snakes from boxes and puts 9 snakes in quick time. She finally puts the python around her neck to complete the stunt. She earned 11 pts for 10 snakes. She clocked 4 mins.

* Rashami Desai
Rashami quickly finds few snakes and puts them in the sack. Due to her nervousness, she handles them roughly and gets warning. She completes her stunt and earns 11 pts for 10 snakes. She clocked 6 min 28 seconds.

Performance & Result: First, Asha did the Nagin dance alongwith Riddhi on Rohit’s insistence. Siddharth gets the danger band and participate in elimination round.

2nd STUNT: Dhoom Machale [BUILDING RUN], Location: Custom House
A stuntman shows the stunt and he collects the flags while coming down from a building in running form with body being parallel to the ground. All the flags need to be hooked after reaching the end to complete the stunt.

* Natalia Kaur
She is confident but doesn’t know what can happen in the aerial stunt. She prays and couldn’t run properly at the onset but continues to follow on and plucks the flags and hooks the flags which she collected. She got 5 flags.

* Meiyang Chang
Meiyang wants to collect max no of flags. He starts his stunt and looses his balance in the initial run and his feet gets crawled in the air. He looses balance on many occasion and moreover doesn’t run. He was able to collect few flags and misses many on the way. After the stunt, he admits on making some mistakes and feels bad. He got 3 flags.

* Sana Khan
She is motivated and does prayers. She misses the flags completely and couldn’t able to collect any of them and perform poorly in the stunt and cites on not able to reach the flags.

Result: Sana gets the danger band and will participate in elimination.

3rd STUNT: Agneepath se panipath [Fire and Water], Location: Belle ville
The contestant need to climb a slider which will be surrounded by fire and water is flowing over it. He/she will dive/splash in the water and need to swim beneath the frame there in water. They need to take the spanner and come out of the frame from the frame’s centre hole. Next, reaching the box and retrieve 2 levers after opening it using the spanner. Again, going back to the hole and swimming to come out of the pool. They need to put those 2 levers to shut off the fire and water flow. Sagarika decides the ordering by following the tap while standing behind Rohit’s back.

* Archana Vijaya
She was nervous but wants to seize the moment. She starts her stunt and dives in thto the water from the slider. She swims and passes through the hole to reach the spanner and comes out agai. Reaches the box and opens it using the spanner to retrieve two levers. Due to ice floor there, she was slipping but manages her balance. She comes out of the pool and put those levers and in the 2nd attempt succeds and completes her stunt. She clocked 2 min 27 seconds.

* Husssain Kuwajerwala
He is not a good swimmer and starts his stunt by making a splash in water. He takes the eye wear after reaching the frame and comes out of the centre hole. He couldn’t figure out the location of centre hole for brief time and finally comes out. After some efforts he manages to retrieve those levers from the box. He comes out the pool and put those levers and manages to complete his stunt. After the stunt, he reveals about wearing contact lenses for his eyesight and during the stunt couldn’t see very well since one of his lenses came out. He clocked 2 min 49 seconds.

Next Episode [Tomorrow]: Two stunts and then elimination stunt. Participant on Moving Bus, Under water stunt  with sheets, and coffin stunt for the elimination round.